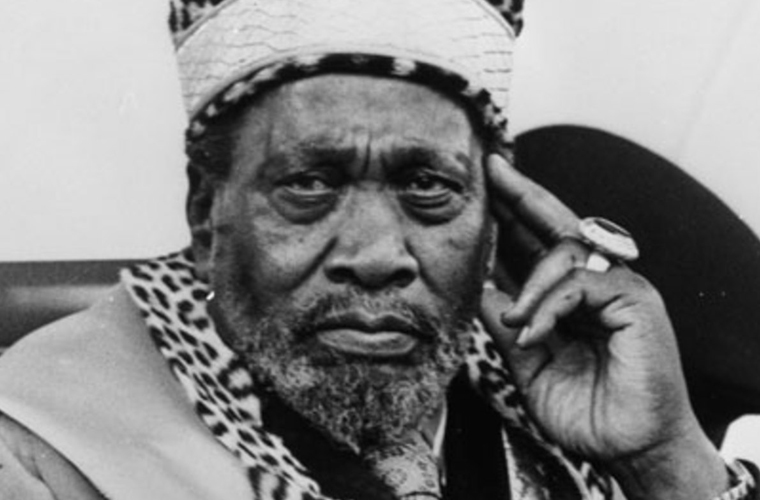 Jomo Kenyatta, original name Kamau Ngengi, (born c. 1894, Ichaweri, British East Africa [now in Kenya]—died August 22, 1978, Mombasa, Kenya), African statesman and nationalist, the first prime minister (1963–64) and then the first president (1964–78) of independent Kenya. Kenyatta was born as Kamau, son of Ngengi, at Ichaweri, southwest of Mount Kenya in the East African highlands. His father was a leader of a small Kikuyu agricultural settlement. At about age 10 Kamau became seriously ill with jigger infections in his feet and one leg, and he underwent successful surgery at a newly established Church of Scotland mission. This was his initial contact with Europeans. Fascinated with what he had seen during his recuperation, Kamau ran away from home to become a resident pupil at the mission.

He studied the Bible, English, mathematics, and carpentry and paid his fees by working as a houseboy and cook for a European settler. In August 1914 he was baptized with the name Johnstone Kamau. He was one of the earliest of the Kikuyu to leave the confines of his own culture. And, like many others, Kamau soon left the mission life for the urban attractions of Nairobi. There he secured a job as a clerk in the Public Works Department, and he also adopted the name Kenyatta, the Kikuyu term for a fancy belt that he wore. After serving briefly as an interpreter in the High Court, Kenyatta transferred to a post with the Nairobi Town Council. At about this time he married and began to raise a family.

The first African political protest movement in Kenya against a white-settler-dominated government began in 1921—the East Africa Association (EAA), led by an educated young Kikuyu named Harry Thuku. Kenyatta joined the following year. One of the EAA’s main purposes was to recover Kikuyu lands lost when Kenya became a British crown colony (1920). The Africans were dispossessed, leaseholds of land were restricted to white settlers, and native reservations were established. In 1925 the EAA disbanded as a result of government pressures, and its members re-formed as the Kikuyu Central Association (KCA). Three years later Kenyatta became this organization’s general secretary, though he had to give up his municipal job as a consequence.

In May 1928 Kenyatta launched a monthly Kikuyu-language newspaper called Mwigithania (“He Who Brings Together”), aimed at gaining support from all sections of the Kikuyu. The paper was mild in tone, preaching self-improvement, and was tolerated by the government. But soon a new challenge appeared. A British commission recommended a closer union of the three East African territories (Kenya, Uganda, and Tanganyika). British settler leaders supported the proposal, expecting that internal self-government might follow. To the KCA such a prospect looked disastrous for Kikuyu interests; in February 1929 Kenyatta went to London to testify against the scheme, but in London, the secretary of state for colonies refused to meet with him.

In March 1930 Kenyatta wrote an eloquent letter in The Times of London setting out five issues championed by the KCA:  security of land tenure and the return of lands allotted to European settlers,  increased educational facilities,  repeal of hut taxes on women, which forced some to earn money by prostitution, African representation in the Legislative Council, and noninterference with traditional customs. He concluded by saying that the lack of these measures “must inevitably result in a dangerous explosion—the one thing all sane men wish to avoid.”

Again in 1931 Kenyatta’s testimony on the issue of the closer union of the three colonies was refused, despite the help of liberals in the House of Commons. In the end, however, the government temporarily abandoned its plan for a union. Kenyatta did manage to testify on behalf of Kikuyu land claims in 1932 at hearings of the Carter Land Commission. The commission decided to offer compensation for some appropriated territories but maintained the “white highlands” policy, which restricted the Kikuyu to overcrowded reserves.

Kenyatta subsequently visited the Soviet Union (he spent two years at Moscow State University) and traveled extensively through Europe; on his return to England, he studied anthropology under Bronisław Malinowski at the London School of Economics. His thesis was revised and published in 1938 as Facing Mount Kenya, a study of the traditional life of the Kikuyu characterized by both insight and a tinge of romanticism. This book signaled another name change, to Jomo (“Burning Spear”) Kenyatta.

During the 1930s Kenyatta briefly joined the Communist Party, met other black nationalists and writers, and organized protests against the Italian invasion of Ethiopia. The onset of World War II temporarily cut him off from the KCA, which was banned by the Kenya authorities as potentially subversive. Kenyatta maintained himself in England by lecturing and working as a farm laborer, and he continued to produce political pamphlets publicizing the Kikuyu cause. Kenyatta helped organize the fifth Pan-African Congress, which met in Manchester, England, on October 15–18, 1945, with W.E.B. Du Bois of the United States in the chair; Kwame Nkrumah, the future leader of Ghana, was also present. Resolutions were passed and plans were discussed for mass nationalist movements to demand independence from colonial rule.

Kenyatta returned to Kenya in September 1946 to take up leadership of the newly formed Kenya African Union, of which he was elected president in June 1947. From the Kenya African Teachers College, which he directed as an alternative to government educational institutions, Kenyatta organized a mass nationalist party. But he had to produce tangible results in return for the allegiance of his followers, and the colonial government in Kenya was still dominated by unyielding settler interests. The “dangerous explosion” among the Kikuyu that he had predicted in 1930 erupted as the Mau Mau rebellion of 1952, which was directed against the presence of European settlers in Kenya and their ownership of land. On October 21, 1952, Kenyatta was arrested on charges of having directed the Mau Mau movement. Despite government efforts to portray Kenyatta’s trial as a criminal case, it received worldwide publicity as a political proceeding. In April 1953 Kenyatta was sentenced to seven-year imprisonment for “managing the Mau Mau terrorist organization.” He denied the charge then and afterward, maintaining that the Kenya African Union’s political activities were not directly associated with Mau Mau violence.

The British government responded to African demands by gradually steering the country toward African majority rule. In 1960 the principle of one man, one vote was conceded. Kenyan nationalist leaders such as Tom Mboya and Oginga Odinga organized the Kenya African National Union (KANU) and elected Kenyatta (still in detention despite having completed his sentence) president in absentia; they refused to cooperate with the British while Kenyatta was detained. In a press conference, Kenyatta promised that “Europeans would find a place in future Kenya provided they took their place as ordinary citizens.”

Kenyatta was released in August 1961, and, at the London Conference early in 1962, he negotiated the constitutional terms leading to Kenya’s independence. KANU won the pre-independence election in May 1963, forming a provisional government, and Kenya celebrated its independence on December 12, 1963, with Kenyatta as prime minister. A year later Kenya became a one-party republic when the main opposition party went into voluntary liquidation. At the same time, Kenyatta became the first president of Kenya under a new constitutional amendment. In this office, he headed a strong central government, and successive constitutional amendments increased his authority, giving him, for instance, the power to arrest political opponents and detain them without trial if he considered them dangerous to public order—a power he used effectively though infrequently. To forestall any tribally based opposition, Kenyatta consistently appointed members of different ethnic groups to his government, though he relied most heavily on his fellow Kikuyu. In general, Kenya enjoyed remarkable political stability under Kenyatta’s rule, though conflicts within KANU’s political leadership did occasionally break out because of ideological differences and tribal rivalries.

Kenyatta early on rejected socialist calls for the nationalization of property and instead preached a doctrine of personal and entrepreneurial effort, symbolized by his slogan “Harambee,” or “Pulling together.” Besides relying heavily on a free-market economy, he encouraged foreign investment from Western and other countries. Largely as a result of his policies, Kenya’s gross national product grew almost fivefold from 1971 to 1981, and its rate of economic growth was among the highest on the continent in the first two decades after independence. But though economic growth benefited large numbers of people, it also led to tremendous disparities of wealth, much of which was in the hands of Kenyatta’s family and close associates. This concentration of wealth, along with an extremely high rate of population growth, meant that most Kenyans did not realize a correspondingly large increase in their living standards under Kenyatta’s leadership.

In foreign policy, Kenyatta’s government was consistently friendly toward the West. Always—in spite of his imprisonment by the British authorities—one of the more pro-British African leaders, Kenyatta made Kenya the most stable black African country and one of the most economically dynamic. After his death at Mombasa in 1978, Kenyatta was succeeded by Daniel Arap Moi, who continued most of his policies.