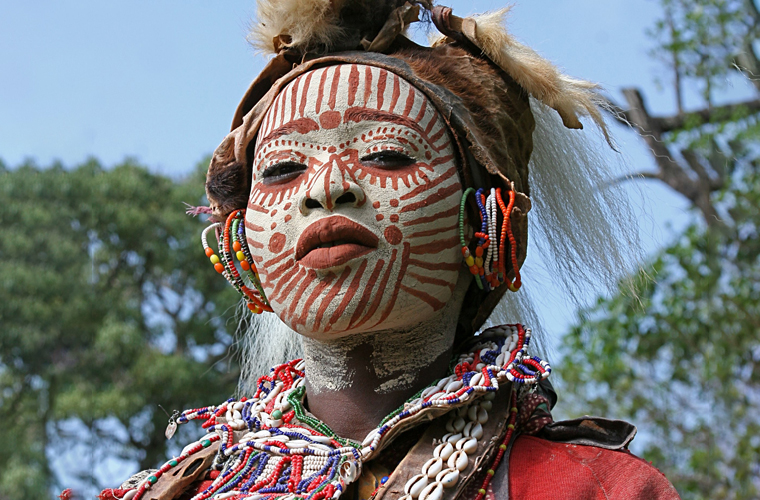 Kikuyu, also called Gikuyu or Agikuyu, are Bantu-speaking people who live in the highland area of south-central Kenya, near Mount Kenya. In the late 20th century the Kikuyu numbered more than 4,400,000 and formed the largest ethnic group in Kenya, approximately 20 percent of the total population. Their own name for themselves is Gikuyu or Agikuyu.

The Kikuyu moved into their modern territory from the northeast in the 17th–19th century. Their indigenous economy rested upon intensive hoe cultivation of millet (the staple crop), peas, beans, sorghum, and sweet potatoes. The main modern cash crops are coffee, corn (maize), wattle, and fruits and vegetables. Some groups practiced irrigation and terracing. Animal husbandry provided an important supplement.

The Kikuyu traditionally lived in separate domestic family homesteads, each of which was surrounded by a hedge or stockade and contained a hut for each wife. During the Mau Mau rebellion of the 1950s, however, the British colonial government moved the Kikuyu into villages for reasons of security. The economic advantages of village settlement and land consolidation led many Kikuyu to continue this arrangement after the emergency was ended. The local community unit is the mbari, a patrilineal group of males and their wives and children ranging from a few dozen to several hundred persons. Beyond the mbari, the people are divided among nine clans and a number of subclans.

Kikuyu also is organized into age sets that have served as the principal political institutions. Groups of boys are initiated each year and ultimately grouped into generation sets that traditionally ruled for 20 to 30 years. Political authority traditionally was vested in a council of elders representing a particular age class during its occupancy of the ruling grade. The Kikuyu believe in an omnipotent creator god, Ngai, and in the continued spiritual presence of ancestors.

Because they resented the occupation of their highlands by European farmers and other settlers, the Kikuyu were the first native ethnic group in Kenya to undertake anticolonial agitation, in the 1920s and ’30s. They staged the Mau Mau uprising against British rule in 1952 and spearheaded the drive toward Kenyan independence later in the decade. They became the economic and political elite of independent Kenya. Jomo Kenyatta, a Kikuyu, was Kenya’s first prime minister (1963–64) and first president (1964–78). He was also one of the first Africans to receive a Ph.D. (London School of Economics) in anthropology and to publish an ethnography (Facing Mount Kenya, 1938).