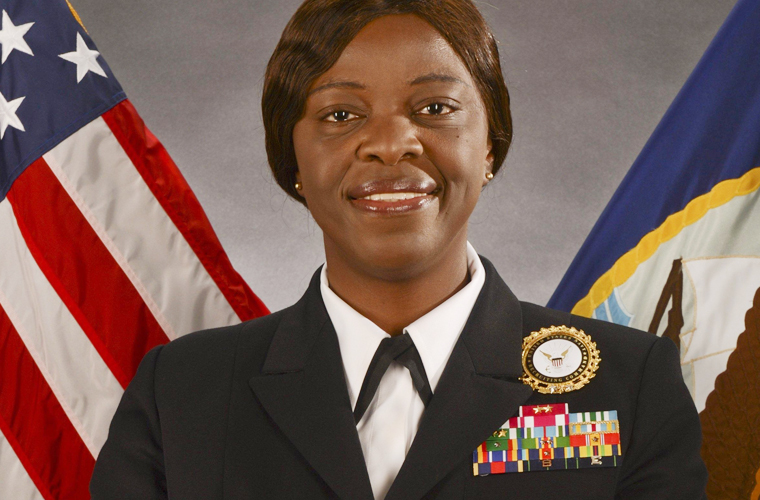 Fishburne was appointed to the rank of Rear Admiral by President of the United States Bill Clinton and was officially promoted on February 1, 1998. Rear Admiral Fishburne retired from the Navy in February 2001.

Lillian Fishburne was born near the water at Patuxent River, Maryland into a naval family. Her active-duty father never questioned his daughter’s military career ambitions because she was female, and his faith in her paid off. Fishburne was raised in Rockville, Maryland where she attended Richard Montgomery High School. In 1971, she graduated from Lincoln University in Oxford, Pennsylvania with a Bachelor of Arts degree in Sociology. In February 1973, Lillian Fishburne became an Ensign after graduating from the Women Officers School at Newport, Rhode Island.

Fishburne’s first naval assignment was at the Naval Air Test Facility, Lakehurst, New Jersey, as a Personnel and Legal Officer. From August 1974 to November 1977, Fishburne was an Officer Programs recruiter in Miami, Florida. For the next three years, 1977 to 1980, Fishburne was the Officer in charge of the Naval Telecommunications Center at the Great Lakes, Illinois Naval Base.

Lillian Fishburne earned her Master of Arts in Management from Webster College in St. Louis, Missouri in 1980 and for the next two years was a student at the Naval Postgraduate School in Monterey, California. In 1982, Fishburne earned her Master of Science in Telecommunications Systems Management at the Naval Postgraduate School. After graduating, Fishburne served for two years at the Command, Control, Communications Directorate for the Chief of Naval Operations. There, she served as the Assistant Head, Joint Allied Command and Control Matters Branch until December 1984.

Rear Admiral Lillian Fishburne’s next assignment was Executive Officer, Naval Communication Station, Yokosuka, Japan. In February 1987, she was assigned to the Command, Control, and Communications Directorate, Chief of Naval Operations as a Special Projects Officer.

Fishburne’s next duty assignment was Commanding Officer, Naval Computer and Telecommunications Station in Key West, Florida from July 1990 to July 1992. Following this tour, Rear Admiral Lillian Fishburne was a student at the Industrial College of the Armed Forces until 1993. Upon graduation, she was assigned to the Command, Control, Communications and Computer Systems Directorate, The Joint Staff, Washington, D.C., assuming the position as Chief, Command and Control Systems Support Division in December 1994.

After three years as the Director of the Information Transfer Division for Space, Information Warfare for the Chief of Naval Operations, in Washington, D.C., Fishburne retired in February 2001.