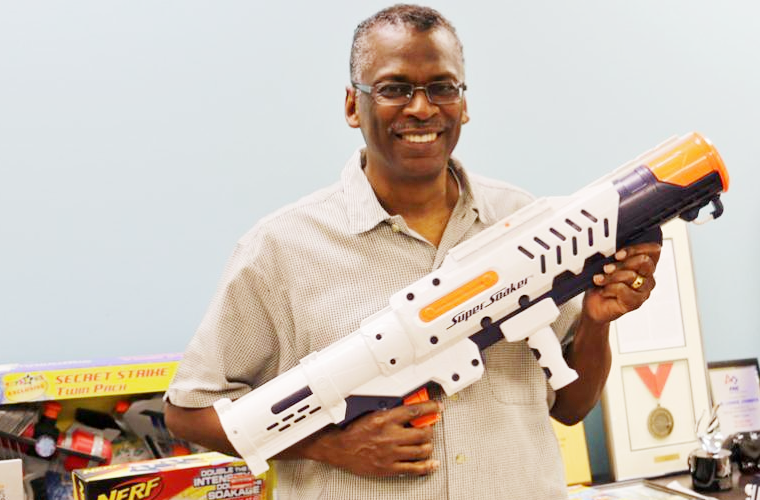 For the past 30 years, kids (and more than a few adults) around the world have busted out their Super Soakers and conquered their neighborhood water gunfights. The high-power water bazooka is an impressive piece of technology in its own right, but its origin and legacy make it a piece of living history.

While the Super Soaker first hit toy store shelves in 1990, when it was known as the Power Drencher, it was actually first conceived in 1982, in the bathroom and basement of a NASA engineer named Lonnie Johnson. His story is the culmination of intelligence and ambition, as well as remarkable success in the face of systemic racism.

Born in Mobile, Alabama in 1949, Johnson was naturally curious and his interest in science and technology was fostered by his father, an Army base truck driver, who taught him how electric currents work and how to repair household appliances.

“My parents’ support was a big deal,” he once told the Smithsonian Institute. “I played with rockets when I was a kid. One day I was making some rocket fuel on top of the stove. It ignited and could have nearly burned the house down. Instead [of yelling] my parents got me a hot plate and said ‘do that kind of stuff outside.’”

Johnson was known as “The Professor” amongst his friends thanks to his uncanny knowledge of mechanical technology and unending experimentation. Together they built engines out of scrap parts and stuck them atop go-karts, while Johnson spent countless hours at home learning the basics of robotics.
By high school, Johnson had moved on to building his own robot, and in his senior year, he entered his creation, named Linex, into a science fair hosted by the University of Alabama’s Junior Engineering Technical Society. “He was three-and-a-half-feet (1m) tall, had shoulders that could rotate and two arms with elbows and wrists that swiveled,” Johnson later remembered. “He could pivot and move around on wheels.”

This was 1968, in Alabama still marked by segregation and open racism in all aspects of life. Johnson attended a segregated high school and was the only Black entrant into the University of Alabama’s science fair. Linex was so impressive that they could not deny Johnson first place, a major accomplishment that also taught him something of a painful lesson: Despite creating an incredible robot out of scrap metal, no one from the University of Alabama showed interest in the academic future of such an obviously talented young scientist.

Instead, Johnson attended the famed Tuskegee University, from which he graduated with a degree in mechanical engineering and a master’s in nuclear engineering, finishing up his schooling in 1975. Then it was on to working for the Air Force to fulfill his end of the ROTC scholarship that the military branch had underwritten for his schooling. While with the Air Force, he got his first patent, for an invention he called the “Digital Distance Measuring Instrument.” Simply put, it was an early version of DVD-reading technology, an innovation he later called “the big fish that got away” because he did not pursue it further.

Fortunately, it was just the beginning of Johnson’s career, so any regrets would be dwarfed by his later successes. In 1979, he was recruited by NASA’s Jet Propulsion Laboratory, beginning a key new chapter in his career.

The inspiration for the Super Soaker came while experimenting for a major NASA mission At NASA, Johnson was part of the historic Galileo mission, which sent an unmanned craft to study Jupiter and the depths of space en route to the largest planet in the solar system. One evening, while fiddling with ideas for a new refrigeration system that used water instead of the environmentally hazardous freon, he hooked a nozzle up to his bathroom sink.

“I accidentally shot a stream of water across a bathroom where I was doing the experiment and thought to myself, ‘This would make a great gun,’” he later told Popular Mechanics. The idea had to be put on pause so that Johnson could move from Pasadena to Nebraska, wherein in 1982 he rejoined the Air Force to work on a very sensitive project. By day, he worked on the first B-52 stealth bomber on the Air Force Base, and by night, he designed and built plexiglass pieces for a water gun on the lathe in his basement.

Once completed, Johnson handed the first prototype off to his 7-year-old daughter Aneka, who used it to absolutely wreck every other kid on the Air Force base. The water gun prototype was a success. Johnson’s original plan was to manufacture the guns himself, but the $200,000 quote he received to get the first 1,000 guns in stores was far too steep for him to handle alone.

It took seven years for the Super Soaker to hit shelves
Thus began a seven-year search for a production partner, which ended only after a chance encounter at the American International Toy Fair in New York. A representative from the Philadelphia-based toy company Larami signaled some interest in the prototype and offered to host Johnson at the office if he ever found himself in Philadelphia.

Johnson already had one toy under his belt at that point, another compressed air contraption called the Jammin’ Jet, which largely failed because it was shipped with a defect. This time, he was eager to make things right, and while Larami was largely known for knock-off toys, they were the only ones showing interest. Johnson went back home, redesigned the water gun, adding a water tank made out of a two-liter soda bottle atop the barrel, and made his pitch.

“I took the gun out of my suitcase,” Johnson remembered. “They asked if it worked and I shot water across the conference room.”

That was that. Larami put the first line of the gun, then known as the Power Drencher, on shelves in 1990. It was an instant hit, and after it was redesigned and rebranded Super Soaker the next year, sales went through the roof, with more than two million units sold in the summer of 1991.

Johnson was not content with simply making a fortune with the toy — he went back to NASA for a time and then helped Hasbro with cutting-edge innovations for its Nerf line. Now he runs his own lab, has earned over 100 patents, and is helping mentor a new generation of scientists, with a special focus on young people of color.

“When you look at large corporations, the minority representation is only 10 percent or so, but minorities are 30 percent of the population — soon to be 40 percent,” he said in 2017. “We can’t maintain technology leadership in the world when we’re leaving large segments of our population on the sidelines. We need all hands on deck. That’s something I emphasize to people every opportunity I get.”