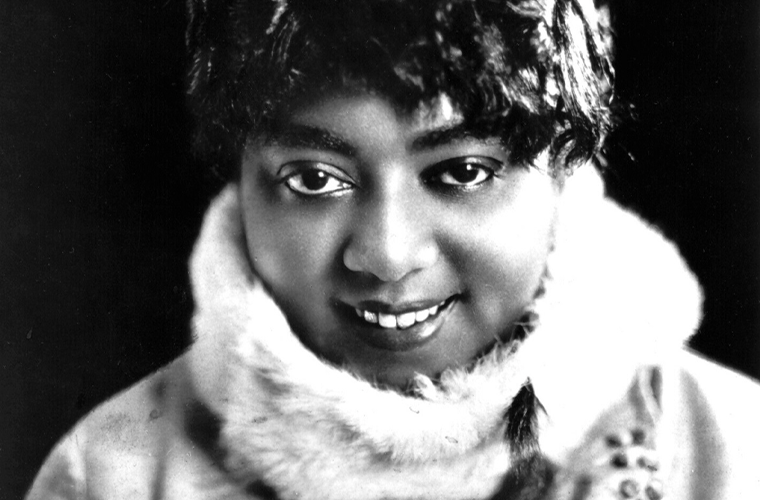 Actress and performing artist Mamie Smith made music history in 1920 when she stepped into a studio to lay down “Crazy Blues,” considered by industry scholars to be the very first blues recording. Smith was a glamorous and multi-talented entertainer, performing on stage and in film. Her pioneering musical career paved the way for more successful female blues and jazz artists like “Ma” Rainey, Bessie Smith (no relation), and Billie Holiday.

Although little is known about her early years, scholars believe that Smith was born Mamie Robinson in Cincinnati, Ohio in 1883. By the age of 10, she was working as a vaudeville entertainer and touring with the Four Dancing Mitchells. She continued to tour with various acts throughout her teens. By 1913 at the age of 20, she was living and working in Harlem and soon after married William “Smithy” Smith. She remarried twice after her career took off.

In 1918 she was starring at the Lincoln Theater in Made in Harlem (referred to in some texts as Maid of Harlem), a musical revue produced by Perry Bradford who also composed the legendary “Crazy Blues” song. Wishing to have some of his songs recorded, Bradford contacted and was rejected by a number of studios until signing an agreement with General Phonograph.

In February of 1920, Bradford brought Mamie Smith to the company’s Okeh Studios in New York to record “That Thing Called Love” and “You Can’t Keep a Good Man Down.” On August 20, Smith and Bradford returned to the studio with a group of African American musicians known as the Jazz Hounds to record “It’s Right Here for You” and “Crazy Blues,” widely considered the first blues song on the record. It was extremely successful, purportedly selling 75,000 copies within the first months of its release. The immediate popularity prompted other recording companies to sign on female black blues singers to capture the new “race records” market.

While “Crazy Blues” is cited as the first blues recording, it also represents the emergence of black female singers into popular music culture. The record was purchased by black and white consumers and was recognized as a lucrative marketing segment by studios and record company executives.

Smith found herself suddenly wealthy, and she spent much of her earnings on clothes, jewelry, real estate, and servants. She toured with the Jazz Hounds, recorded a number of follow-up records, and performed in New York theaters. She also appeared in a series of low-budget African American films during the early 1940s. Mamie Smith died in Harlem in 1946.