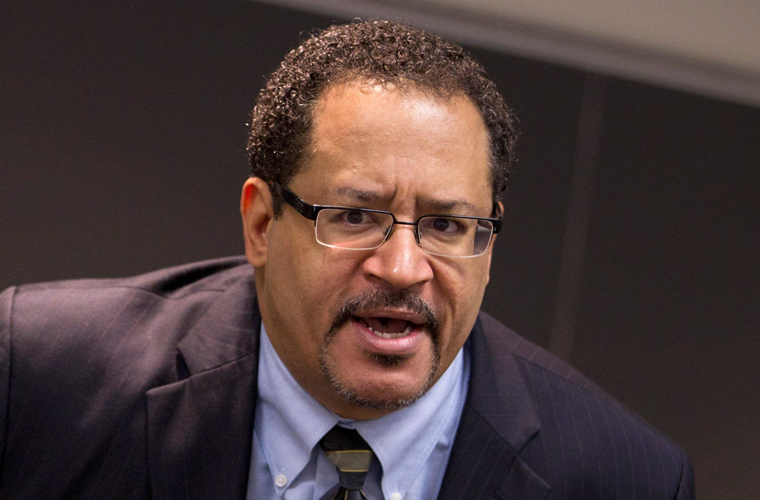 Michael Eric Dyson is a distinguished professor at an Ivy League University; a prolific, award-winning writer of books and articles; a social and cultural critic; a public intellectual; a popular lecturer; a frequent talk show guest; a radio show host; and an ordained minister. He has been hailed as one of the most influential and inspirational of all African Americans as he steadfastly focuses on issues of race, identity, religion, and popular culture in American society.

Dyson was born on October 23, 1958, in Detroit, Michigan, to Addie Mae Leonard, who picked cotton in Alabama before becoming a paraprofessional for the Detroit board of education. He was adopted by Everett Dyson after Leonard married him in 1960. Consequently, Dyson had four stepbrothers, and he was the second oldest of the five sons who were raised in the inner city. Everett Dyson worked at Kelsey-Hayes, an auto parts factory, for thirty-three years. When Dyson was twelve years old, he began helping his father as he worked part-time at Morton’s Nursery. After Everett Dyson was laid off from Kelsey-Hayes in 1970, he refused to apply for welfare. Instead, he started Dyson and Sons Grass Cutting and Sodding. The Dyson boys also helped their father look for discarded metal in the city’s alleys, which they sold to junkyards. The elder Dyson later worked as a maintenance man for a church and drug store prior to his death in 1981.

Dyson attended public schools in Detroit where three teachers greatly influenced him: Mrs. James, Dyson’s fifth-grade teacher at Wingert Elementary School, who inspired him to learn about and be proud of his African American heritage; Otis Burdette, Dyson’s seventh-grade English teacher at Webber Junior High School, who recognized and encouraged Dyson’s potential talents as a public speaker; and Lola Black, Dyson’s French teacher at Northwestern High School, who in addition to speaking French and English, spoke “the language of black self-esteem through rigorous study and linguistic excellence” (according to Why I Love Black Women) and encouraged Dyson to serve as a French tutor for his classmates. During his early teen years, Mrs. Bennett, who was Dyson’s neighbor, gave him her late husband’s set of Harvard Classics. Thus Dyson, who read each book in the collection, read such literary classics such as Richard Dana’s Two Years Before the Mast (1840). He read great literature at an early age, and he also listened to popular African American musicians, such as the artists on the Motown record label.

Two events in the late 1960s were pivotal moments in Dyson’s childhood. In July 1967, a riot broke out in Detroit after police officers arrested eighty-two people who were celebrating the return of two members of the military from Vietnam at an after-hours club. By the time the riots ended, more than forty people were dead, approximately four hundred to one thousand people were injured, and thousands of people were arrested. Dyson, who was eight years old, saw the destruction and the looting. In his first book, Reflecting Black: African-American Cultural Criticism, Dyson recalls that “[he] felt the reprimand and fear of the word that regulated our lives during that painful period and that signified the sharp division of safe and unsafe social time: curfew.”

One year later, the assassination of Martin Luther King Jr. proved to be an even more traumatic time for Dyson. He acknowledged in Reflecting Black that King’s murder “heralded the end of [his] youthful innocence” and that for months he feared standing in front of windows and doors at night. His nine-year-old mind reasoned that if a man of peace such as Martin Luther King Jr. could be assassinated, he could also be killed. King’s assassination was Dyson’s “initial plunge into the tortuous meanings of racial politics, and [he] began to believe that the world was largely predicated upon color, its vain and violent ubiquity becoming increasingly apparent to [his] newly opened eyes.” Although Dyson did not know who King was prior to his assassination on April 4, 1968, King became an important figure in Dyson’s life. Dyson, who listened to King’s “I’ve Been to the Mountaintop” speech, aspired to become a stirring and powerful orator. In 1971 Dyson, at the age of twelve, delivered his first public speech in an oratorical contest and won.

That same year, Dyson met Frederick G. Sampson II, who was pastor of the Tabernacle Missionary Baptist Church. Sampson, who encouraged Dyson to read W. E. B. Du Bois and Bertrand Russell became Dyson’s mentor. At the age of sixteen and with Sampson’s assistance, Dyson was the recipient of a scholarship to Cranbrook, a boarding school in Bloomfield Hills, Michigan that was thirty miles from Detroit. Dyson recalls in Reflecting Black, “That short distance had divided me from a world I had never known as a poor black inner-city youth: white wealth, power, and privilege. I had never gone to school with white kids before, much less wealthy white kids, many the sons and daughters of famous parents, a banking magnet here, a film giant there. I immediately experienced Hitchcockian vertigo about the place, its seductive grandeur, warming grace, and old-world elegance not enough to conceal the absurdity of racism that lurked beneath its breathtaking exterior.” Dyson left Cranbrook near the end of his second year, returned home to Detroit, and eventually earned his high school diploma at night school.

Dyson held various jobs such as a clerk-typist at a Chrysler plant, a manager-trainee at a fast-food restaurant, an arc welder and unloader of trains with brake drums at Kelsey-Hayes, and a substitute janitor in the Detroit Public School System. In 1977, eighteen-year-old Dyson married his pregnant girlfriend, Terrie, an actress and a waitress who was eight years older than Dyson. Their son, Michael Eric Dyson II, was born in 1978, one month after Dyson lost his job and applied for welfare. Also in 1978 Dyson, with Sampson’s encouragement and assistance, became a licensed Baptist minister.

In 1979 Dyson and his wife divorced. That same year, at the age of twenty-one, he began his pursuit of a college diploma at a historically African American college. Dyson enrolled in Knoxville College in Knoxville, Tennessee before he transferred to Carson-Newman College, a Baptist and predominantly white school in Jefferson City, Tennessee, where he majored in philosophy. During his undergraduate years, Dyson earned a living by working the three o’clock to eleven o’clock shift as a cleaner and degreaser of heavy machinery at Robertshaw Factory. Although he was an honor student, Dyson did not receive a scholarship during his matriculation at Carson-Newman. Dyson graduated magna cum laude with a B.A. in 1982 and received the Outstanding Graduate in Philosophy Award.