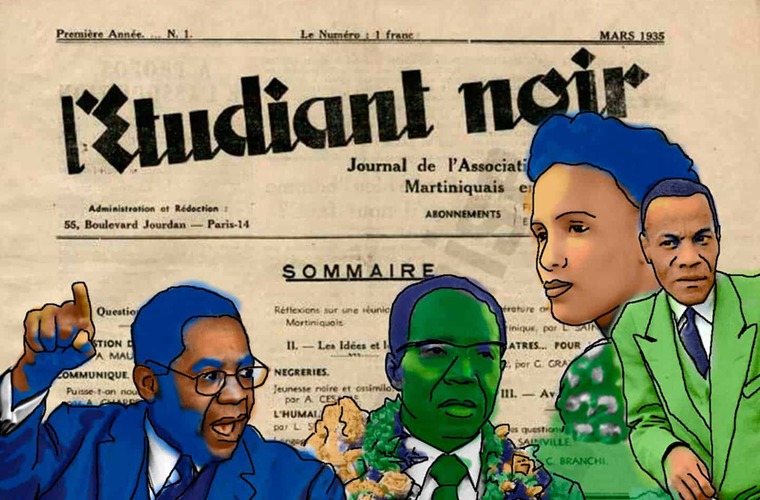 Négritude was both a literary and ideological movement led by French-speaking black writers and intellectuals from France’s colonies in Africa and the Caribbean in the 1930s. The movement is marked by its rejection of European colonization and its role in the African diaspora, pride in “blackness” and traditional African values and culture, mixed with an undercurrent of Marxist ideals. Négritude was born from a shared experience of discrimination and oppression and an attempt to dispel stereotypes and create a new black consciousness.

The movement drew its inspiration from the Harlem Renaissance, which was beginning its decline. The Harlem Renaissance, which was alternatively called the “New Negro Renaissance,” fostered black artists and leaders who promoted a sense of pride and advocacy in the black community, and a refusal to submit to injustices. But as the glory days of the Harlem Renaissance came to an end, many African American intellectuals of the period moved to France, seeking a haven against racism and segregation. Among these artists were Langston Hughes, James Weldon Johnson, Richard Wright, and Claude McKay, who Sengalese poet and politician Léopold Sédar Senghor praised as the spiritual founder of Négritude.

The movement’s founders (or Les Trois Pères), Aimé Césaire, Senghor, and Léon-Gontran Damas, met while studying in Paris in 1931 and began to publish the first journal devoted to Négritude, L’Étudiant noir (The Black Student), in 1934.

The term “Négritude” was coined by Césaire in his Cahier d’un retour au pays natal (Notebook of a Return to the Native Land, 1939) and it means, in his words, “The simple recognition of the fact that one is black, the acceptance of this fact and of our destiny as blacks, of our history and culture.” Even in its beginnings Négritude was truly an international movement—it drew inspiration from the flowering of African American culture brought about by the Harlem Renaissance and found a home in the canon of French literature.

While Césaire’s Cahier d’un retour au pays natal is certainly considered an essential text for the movement, Damas’s debut poetry collection, Pigments (1937), is sometimes referred to as the “manifesto of the movement.” In it, Damas argues against slavery, segregation, colonial assimilation, and the repression or rejection of the racial and cultural self.

Unlike the other members of the Trois Pères, Senghor advocated for assimilation, but a form of assimilation that allowed for “a cultural métissage,” or cultural miscegenation of black and white. While Senghor also promoted a rediscovery and celebration of African beliefs and values and the establishment of an authentic black self, he also imagined a new racial consciousness in which a dual black and white cultural background could work toward a place of mutual enlightenment, a “rendez du donner et recevoir” (“give-and-take”).

The movement’s sympathizers included French philosopher Jean-Paul Sartre and Jacques Roumain, founder of the Haitian Communist Party, among others. Négritude also had its detractors, some of whom charged the movement as promoting a form of black exoticism or fetishization, or creating another form of racism. Senghor responded that Négritude “is neither racialism nor self-negation. Yet it is not just affirmation; it is rooting oneself in oneself, and self-confirmation: confirmation of one’s being. It is nothing more or less than what some English-speaking Africans have called the African personality.”

The movement would later find a major critic in Nigerian poet and playwright Wole Soyinka, who believed that a deliberate and outspoken pride in their color placed black people continually on the defensive, saying notably, “Un tigre ne proclâme pas sa tigritude, il saute sur sa proie,” or “A tiger doesn’t proclaim its tigerness; it jumps on its prey.” Négritude has remained an influential movement throughout the rest of the twentieth century to the present day.