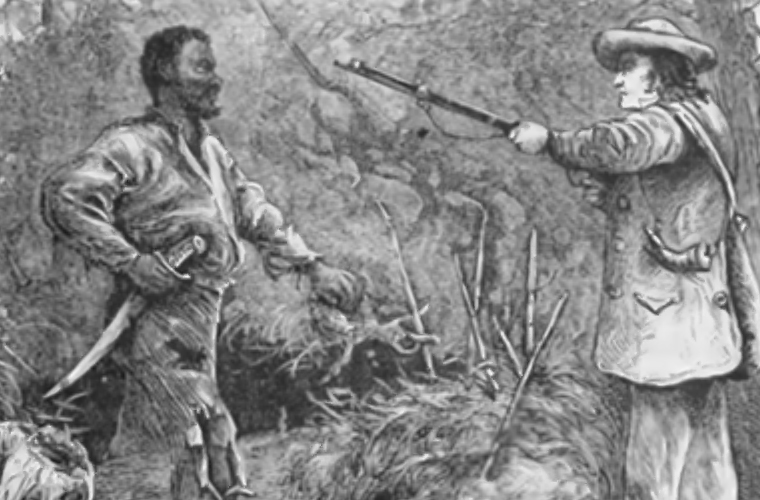 Nat Turner was the leader of a violent slave rebellion in Southampton County, Virginia, in 1831.
Nat Turner (October 2, 1800, to November 11, 1831) was a slave who became a preacher and made history as the leader of one of the bloodiest slave revolts in America on August 21, 1831. Following the insurrection, Turner hid for six weeks, but he was eventually caught and later hanged. The incident ended the emancipation movement in that region and led to even harsher laws against slaves. While Turner became an icon of the 1960s black power movement, others criticized him for using violence as a means of demanding change.

Nat Turner’s life and the uprising were also the subjects of the 2016 film, The Birth of a Nation, which was directed, written by, and starring Nate Parker. The film won the Audience Award and Grand Jury Prize at the 2016 Sundance Film Festival. On August 21, 1831, Nat Turner and his supporters began a revolt against white slave owners with the killing of his owners, the Travis family.

Turner believed in signs and heard divine voices, and he had a vision in 1825 of a bloody conflict between black and white spirits. Three years later, he had what he believed to be another message from God. In his later confession, Turner explained: “the Spirit instantly appeared to me and said the Serpent was loosened, and Christ had laid down the yoke he had borne for the sins of men, and that I should take it on and fight against the Serpent.” Turner would receive another sign to tell him when to fight, but this latest message meant “I should arise and prepare myself and slay my enemies with their own weapons.”

Turner took a solar eclipse that occurred in February 1831 as a signal that the time to rise up had come. He recruited several other slaves to join him in his cause. Turner gathered more supporters—growing to a group of up to 40 or 50 slaves—as he and his men continued their violent spree through the county. They were able to secure arms and horses from those they killed. Most sources say that about 55 white men, women, and children died during Turner’s rebellion.

Initially, Turner had planned to reach the county seat of Jerusalem and take over the armory there, but he and his men were foiled in this plan. They faced off against a group of armed white men at a plantation near Jerusalem, and the conflict soon dissolved into chaos. Turner himself fled into the woods.

While Turner hid, white mobs took their revenge on the blacks of Southampton County. Estimates range from approximately 100 to 200 African Americans who were slaughtered after the rebellion.

Turner was eventually captured on October 30, 1831. He was represented by lawyer Thomas R. Gray, who wrote down Turner’s confession. Turner pled not guilty during his trial, believing that his rebellion was the work of God. He was sentenced to death by hanging, and this sentence was carried out on November 11, 1831. Many of his co-conspirators met the same fate.

The incident put fear in the heart of Southerners, ending the organized emancipation movement in that region. Southern states enacted even harsher laws against slaves instead. Turner’s actions also added fuel to the abolitionist movement in the North. Noted abolitionist William Lloyd Garrison even published an editorial in his newspaper The Liberator in support of Turner to some degree.

Turner was born on October 2, 1800, in Southampton County, Virginia, on the Virginia plantation of Benjamin Turner. Turner’s mother was named Nancy, but nothing is known about his father. Nat Turner’s slave owner Benjamin allowed him to be instructed in reading, writing, and religion.

As a small child, Turner was thought to have some special talent because he could describe things that happened before he was even born. Some even remarked that he “surely would be a prophet,” according to his later confession. His mother and grandmother told Turner that he “was intended for some great purpose.” Turner was deeply religious and spent much of his time reading the Bible, praying, and fasting.

Over the years, Turner worked on a number of different plantations. He ran away from Samuel Turner, his former owner’s brother, in 1821. After 30 days of hiding in the woods, Turner came back to Turner’s plantation after he received what he believed to be a sign from God. After Samuel Turner’s death, Nat Turner became the slave of Thomas Moore and then the property of his widow. When she married John Travis, Nat Turner went to work on Travis’ lands.

Over the years, Turner has emerged as a hero, a religious fanatic, and a villain. Turner became an important icon to the 1960s black power movement as an example of an African American standing up against white oppression.

Others have objected to Turner’s indiscriminate slaughtering of men, women, and children to try to achieve this end. As historian Scot French told The New York Times, “To accept Nat Turner and place him within the pantheon of American revolutionary heroes is to sanction violence as a means of social change. He has a kind of radical consciousness that to this day troubles advocates of a racially reconciled society. The story lives because it’s relevant today to questions of how to organize for change.”