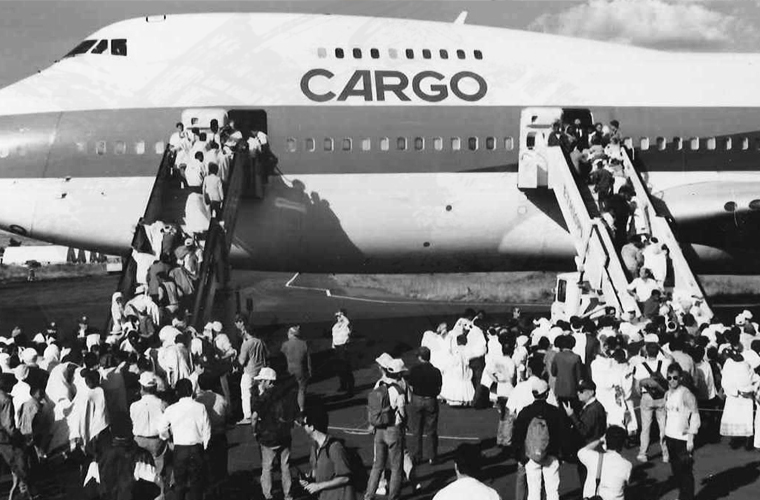 In the 1970s, the Israeli government made the decision to authorize the use of the IDF to enable the immigration of thousands of Jews who were living in Ethiopia, a country that at the time prohibited its citizens from emigrating to Israel. Beginning in 1984, the IDF brought Ethiopian Jews to Israel in three airlift operations, the last of which was Operation Solomon in 1991.

In May 1991, famine once again hit North Africa. In addition, the acting government was weak, and the likelihood of it falling to Eritrean rebels was high. Ethiopia’s Jews were in danger.

On March 7, Uri Lubrani, an Israeli diplomat, reported on the worsening military situation in Ethiopia, and advised the formulation of “an emergency plan, for the protection and evacuation of the Jewish community.”

The first part of the plan was to allocate $35 million to pay the Ethiopian government to allow the Jews to leave. The second element was to arrange for the airlift of all the Ethiopian Jews to bring them to Israel.

The first Hercules landed in Addis-Ababa around 10:00 AM, and the crew immediately began assembling the command room. “The first control tower in the northern part of the country did not even respond to our call, as the local city was taken over by rebels, hours earlier,” recalled one officer who landed the first Boeing in Ethiopia. “There was a lot of traffic over the airport at Addis Ababa, and we had to wait for 30 minutes before we could land. The airport itself was very organized, and ground services worked very well.”

The ground plan involved gathering everyone at the Israeli embassy and transporting them to the planes using specially designated buses. Each bus was to be escorted by an Israeli soldier, of Ethiopian origin.

To accommodate as many people as possible, the seats of the planes were removed to accommodate up to 1,200 passengers on a single plane. Planners expected the planes would hold only 760 passengers, but the Ethiopians – many of whom were malnourished – were so light that many more could fit.

“I vividly remember those images from Addis Ababa,” recalls one IAF pilot. “An incredible number of people walked toward the plane, organized in groups of 200. The doctors and paramedics provided ongoing support.”

The first Boeing plane took off at noon, followed by the rest. At one time, 27 planes were in the air. The IAF airlifted nearly 15,000 Jewish men, women, and children in 41 sorties. Less than 24 hours separated the first takeoff from the last. “Never before,” IAF Commander Maj. Gen. Avihu Ben-Nun said, “did so few pilots transport such a great number of people in such a short time.”

At 5:00 P.M. the first plane landed in Tel Aviv. The children came out first. “Everyone looked tired and scared,” recalled Anat Tal-Shir, a reporter for Yediot Aharonot. “The people who arrived during Operation Solomon fled their country with nothing but the clothes they were wearing. The children stayed close to their mothers. A young man carried his elderly father on his shoulders. They both bent down and kissed the Israeli soil.”

As the passengers walked out, Prime Minister Yitzhak Shamir and other government officials greeted them.

Almost 20 years later, Chief of Staff, Lt. Gen. Benny Gantz, who led the ground operation said, “As commander of Shaldag Unit, I had to deal primarily with technical details. Only during the mission did I get a sense of how meaningful it was to be part of this crucial event. It’s a turning point in my service which encompasses both my Zionist values and the meaning of our existence in this country.”

Ben-Nun remarked that “Operation Solomon truly represents what Zionism is.” He added, “It demonstrates the purpose for the State of Israel: to provide a home and shelter for Jews around the world who have suffered and were prosecuted merely for bearing the Jewish religion.”

12 Bible Verses That Supports Brutal Slavery – Dear African, Did You Know This?