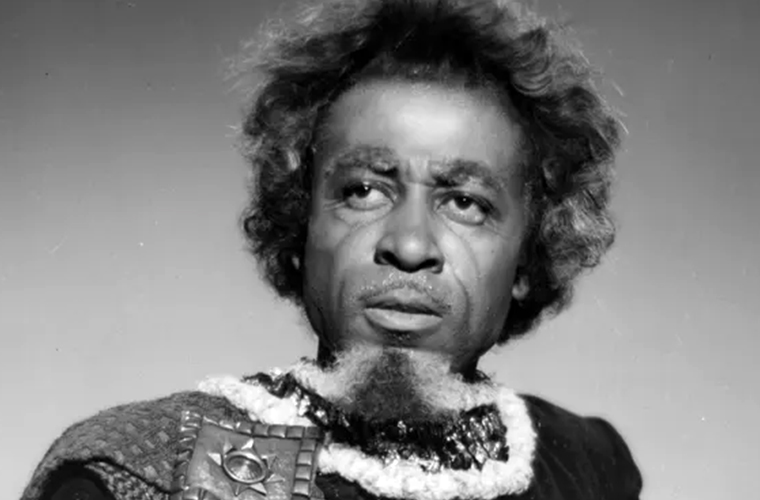 Robert McFerrin Sr. was an African-American baritone opera and concert singer who became the first black male to appear in an opera at the Metropolitan Opera house in New York City, his debut following by less than three weeks the well-publicized breaking of the color barrier by contralto Marian Anderson. However, McFerrin’s career at the Met was brief, being limited to ten performances in three seasons over three years. Although he sang in European opera houses and performed concerts extensively, he failed to attain major prominence. He is best remembered as the father of singer and conductor Bobby McFerrin, with whom he sometimes performed. He was inducted into the Arkansas Black Hall of Fame in 1995.

Robert McFerrin was born on March 19, 1921, in Marianna (Lee County) to Melvin McFerrin, a minister, and Mary McKinney McFerrin. He had seven siblings. McFerrin showed musical talent at an early age. The family moved to Memphis, Tennessee, when he was two, and he completed eight grades there. A talented siffleur (whistler), he joined a family gospel-singing trio at age thirteen. His father arranged for him to attend Sumner High School in St. Louis, Missouri. McFerrin intended to become an English teacher but changed his career plans after he joined the high school choir and received his first formal music instruction under chorus director Wirt Walton.

After graduation from high school in 1940, McFerrin was accepted at Fisk University in Nashville, Tennessee, but stayed only one year. In 1941, after winning a singing contest, he entered Chicago Musical College, where he studied under George Graham. In 1942, he won first prize in the Chicagoland Music Festival. After being drafted and serving in the army, he returned to college. In 1948, he moved to New York, where he became a student of Hall Johnson, a prominent figure in Afro-American music. He married Sara Copper in 1949; she was a Howard University graduate and singer who gave up her career to further his. She was also a polio victim and was in an iron lung while pregnant with their son, Robert Jr. (Bobby), one of their two children.

McFerrin’s New York career began in 1949 with a small part in Kurt Weill’s Lost in the Stars. His performance attracted the attention of Boris Goldovsky, who gave him the scholarship to study at the Tanglewood Opera Theatre outside of Boston. There, in 1949, he made his operatic debut in Giuseppe Verdi’s Rigoletto. He then joined Goldovsky’s touring company, where he added roles in Charles Gounod’s Faust and Christoph Willibald Gluck’s Iphigenie en Tauride. In addition, he sang with the National Negro Opera Company in Verdi’s Aida and at the New York City Center Opera Company in the world premiere of William Grant Still’s Troubled Island. Finally, he returned to Broadway for a revival of Green Pastures in 1951 and the following year for some performances in My Darlin’ Aida, an updated version of the Verdi opera set in Memphis in 1861.

In 1953, urged on by his manager, he entered the Metropolitan Opera’s “Auditions of the Air,” which he won. Usually, the winner received a contract and six months of training. In McFerrin’s case, he received no contract, and his training lasted for thirteen months. McFerrin did not object and later lauded the program for teaching him fencing, ballet, and other aspects of stage deportment.

The second African American and first black male to sing at the Metropolitan Opera, McFerrin debuted on January 27, 1955, when he was cast as Amonasro in Aida. Racial politics rather than sound musical values dictated his being cast as Amonasro. The black Ethiopian king (and father of Aida) has no love duets to sing with white women. At five foot seven inches tall and 140 pounds, the young McFerrin was hardly prepossessing on stage as an evil father figure. His even but not a large voice was not displayed to its best advantage. In addition, prior to the performance, he had never met the evening’s female leads, Aida (Herva Nelli) or Amneris (Blanche Thebom).

A Town Hall recital found him in more congenial circumstances. McFerrin eventually sang only ten performances at the Metropolitan Opera. He did, however, record excerpts from Rigoletto in 1956 for the Metropolitan Opera Club. In addition, there exists a 1956 recording taken from a live broadcast of Aida from Naples, Italy. In 1958, he went to Hollywood to supply the vocals for Sidney Poitier’s Porgy in the motion picture version of George Gershwin’s Porgy and Bess. McFerrin and his wife decided to stay in California, where they became music teachers. In 1973, following their divorce, McFerrin moved back to St. Louis, where he lived until his death. In 1989, he suffered a stroke that affected his speaking but not his singing. He occasionally performed with his son, Bobby, and his daughter, Brenda. In 1994, he and William Warfield appeared in a Schiller Institute concert.

“I am not attempting to carry the load for all Negro singers,” McFerrin had told the New York Post prior to his debut, but in reality the load he had to carry transcended vocal concerns. One major reason for his truncated career was management’s fear of the reaction of audiences to seeing black males on stage as husbands or lovers of white females.

McFerrin died on November 24, 2006, in St. Louis. He is buried in Jefferson Barracks National Cemetery.