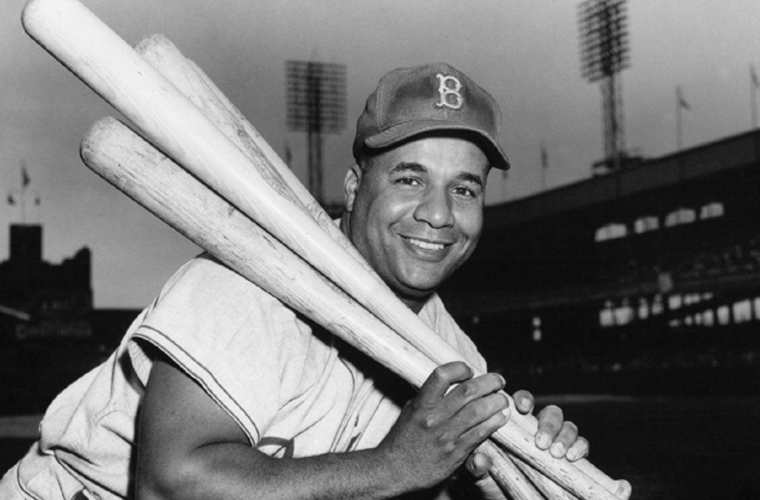 Hall of Fame catcher, Roy Campanella (1921-1993), was one of professional baseball’s African American pioneers. Playing with Jackie Robinson on the Brooklyn Dodgers, Campanella won three Most Valuable Player awards in a 10-year career that was cut short by a crippling automobile accident.

Campanella was one of many stars on the powerful Dodgers teams of the early 1950s, nicknamed “the Boys of Summer.” Duke Snider, Gil Hodges, Jackie Robinson, and Pee Wee Reese got more attention. But Campanella was the heart and soul of the team, its most valuable player, and an astute handler of the Dodgers pitching staff. Something of an amateur psychologist, he knew when to coddle and when to needle his pitchers. “He was always doing something to help you win a game, whether it was digging out a low pitch, throwing out a baserunner, or hitting a home run,” said Dodgers manager, Walt Alston. For his own part, Campanella professed an undying affection for baseball. “It’s a man’s game, but you have to have a lot of little boy in you to play it,” he often said.

Roy Campanella was born on November 19, 1921, in a tough Philadelphia neighborhood known, ironically, as Nicetown. His father was Italian and his mother was African American. His parents worked hard and the five children pitched in to help. By the time he was nine, Roy was cutting grass, delivering newspapers, shining shoes, and delivering milk to earn money for family needs.

Despite his short, stocky stature, Campanella was powerfully built and a gifted athlete, especially at baseball. He played throughout his youth and showed tremendous promise, but his career was blocked by professional baseball’s color bar. Though Campanella had an Italian surname, his skin was dark and his future seemed destined to be in the Negro Leagues, the home of so many great black players in the first half of the twentieth century.

At the age of fifteen, Campanella signed with the Baltimore Elite Giants, one of the Negro League’s top teams. Teammate Othello Renfroe said he was the “biggest fifteen-year-old boy I ever saw in my life.” The team’s shortstop, Pee Wee Butts, would get mad because Campanella would throw the ball so hard to second base during infield practice. Campanella’s parents, who were devout Baptists, wouldn’t let him play on Sundays. Young Roy did not, at first, consider a career in baseball. “I remember I felt so lost,” he told Dodgers biographer Peter Golenbock. “I had no idea in the world this would be my profession. Truthfully, I wanted to be an architect.” But when the Giants asked Campanella’s parents to let him leave school in the eleventh grade so that he could play full-time, they agreed.

For the next decade, Campanella excelled in the segregated world of black baseball, barnstorming on buses across the country and playing winter ball in Mexico, the Caribbean, and Latin America. He was such a natural leader and had such an astute baseball mind that he often managed clubs he played for in Latin America. Campanella figured he was destined to stay in the Negro League throughout his entire career. “I never thought about the big leagues, playing in it,” he told Golenbock. “Never.”

Jackie Robinson broke baseball’s color bar when he signed a professional contract with Branch Rickey, president of the New York Dodgers, in October 1945. Robinson was groomed to be the first black player in the modern major leagues, but he spent the 1946 season with Montreal, then a Class AAA minor-league team. Rickey was determined to integrate all levels of baseball. He signed Campanella and another black player, pitcher Don Newcombe, to play with Nashua, New Hampshire, a Brooklyn farm team in the Class B New England League. The manager of Nashua was Alston, who would later manage the Dodgers.

Campanella was making about $500 a month in the Negro Leagues, but he accepted a pay cut and played for $150 a month at Nashua. “Roy, of course, was better than a Class B player,” Alston said. “But he knew why he was there. He was part of Rickey’s plan to begin integrating baseball. … he knew he was going to start something important.” Campanella batted .290 and was voted the Eastern League’s most valuable player. He even managed a game after Alston was thrown out by the umpire. In that game, Campanella used Newcombe as a pinch-hitter and he slugged a game-winning home run. The next year, when Robinson was promoted to Brooklyn, Campanella stepped up to Montreal and had another strong season.

Campanella thought he would open the 1948 season as the Dodgers’ catcher, but Rickey had other plans. He sent him to St. Paul, Minnesota, to be the first black player in the American Association, another minor league circuit. “I ain’t no pioneer,” Campanella grumbled. “I’m a ballplayer.” At St. Paul, Campanella batted .325 and hit 13 homers in 35 games. At the end of June Rickey called him up to the Dodgers. In his first game, Campanella hit two home runs against the New York Giants and got nine hits in his first twelve at-bats. At the age of 26, he was installed as the regular catcher and kept the job for ten seasons. Campanella at first relied on Rickey to help him win acceptance. “One of the main things he taught me: I had to get all of the white pitching staff to respect my judgment in accepting signs,” Campanella recalled.

During Campanella’s ten years with the Dodgers, they won five National League championships and finished second three times. Brooklyn was a powerhouse club filled with all-star caliber players. Most of them had more speed, more power, and more spectacular defensive opportunities than Campanella. But the solid, brainy catcher was such a mainstay of the team’s success that he was voted the league’s Most Valuable Player in each of the three seasons in which he batted over .300.

The muscular Campanella was a strong offensive force, even in the years when his batting average was low. He hit more than 30 home runs four times. In 1953, he hit 41 home runs and had a league-leading 142 runs batted in. During the eight-year stretch between 1949 and 1956, he averaged 28 home runs a season. His most important contributions were defensive ones. He had a strong and deadly arm. “Sometimes you won simply because he was there,” Alston said. “They wouldn’t try to steal on him. That keeps a guy on base and helps keep your pitcher’s concentration on the batter.”

Campanella was a genius when it came to keeping pitchers concentrated on their work-a catcher’s most important role. He nurtured a great pitching staff that included Don Newcombe, Johnny Podres, Preacher Roe, Carl Erskine, and Clem Labine. “Just seeing him back there made you a better pitcher,” Podres said. Campanella did not hesitate to criticize his pitchers if he felt that was needed to motivate them. “He knew that sometimes if he got me mad I’d pitch better,” Newcombe said. “So he’d come out [to the mound] … and give me some needling. He knew when to do it and how.” Golenbock said: “His most important attribute was that he had the respect of his pitchers, who trusted his judgment implicitly.”

During his best years, Campanella was frequently compared to Yogi Berra, his counterpart as a catcher with the perennial American League champion New York Yankees. Berra also won three MVP awards, in 1951, 1954, and 1955. Some believe Campanella might have won a fourth MVP in 1954 if he hadn’t suffered an injury to his left hand. He played even though it was partially paralyzed and eventually required surgery.

Campanella was behind the plate when the Dodgers played in the World Series in 1949, 1952, 1953, 1955, and 1956. They were losers each year except in 1955 when Brooklyn won its only world championship. Podres pitched a 2-0 shutout in the decisive seventh game and gave credit to his catcher. “That win was half Campy’s,” Podres said. “He never called a better game. He saw how my stuff was working and he seemed to know what the Yankee hitters were looking for.”

Injuries plagued Campanella in 1956 as he batted only. 219 and again in 1957 when he played in only 100 games and batted .242. “Campy’s catching skills began to erode after a careless doctor cut a nerve in his right hand while performing an operation,” Golenbock said. But Alston claimed that his career was far from over because “he was still the soundest defensive catcher in baseball.”

The 1957 season was the Dodgers’ last in Brooklyn. The club was moving to Los Angeles the following year. It would do so without its star catcher. On the night of January 28, 1958, Campanella was driving to his home on Long Island when his car skidded on a slick road, struck a telephone poll, and turned over. Seat belts had not yet become standard safety equipment. The great catcher suffered multiple fractures and dislocations in the vertebrae in his neck and was permanently paralyzed from the shoulders down. He would never walk again.

Campanella ended his career with a .276 batting average, 242 home runs, and 865 runs batted in. If it hadn’t been for the color bar that delayed his entrance to the leagues and the accident which ended his career prematurely, he likely would have posted home run and RBI totals to rival the best catchers of all time. In 1959, the Dodgers staged a benefit game at the Los Angeles Coliseum to honor Campanella and raise money for his medical expenses. The game attracted 93,103 fans, thought to be the largest crowd ever to see a baseball game. That year, Campanella published an autobiography, It’s Good to Be Alive. When the book was re-released in 1995, Publishers Weekly said it “packs more uplift than any inspirational sports bio.”

In some ways, Campanella became more famous in the wheelchair than he had been on the baseball diamond. He never complained about his injury and became an inspiring figure. “Although he was a remarkable ballplayer, I think he’ll be remembered more for his 35 years in a wheelchair,” said Dodgers broadcaster, Vin Scully. The Dodgers hired him as a special instructor, and for 20 years he helped groom many young catchers during spring training. He also worked with disabled people through the Dodgers’ community-service division. He was expert at cheering up people. Campanella once said: “People look at me and get the feeling that if a guy in a wheelchair can have such a good time, they can’t be too bad off after all.” Scully observed: “He looked upon life as a catcher. He was forever cheering up, pepping up, counseling people.”

In fact, Campanella’s life was not always easy. His first marriage dissolved and his house had to be sold in order to pay huge medical debts. In 1963, Campanella married a nurse named Roxie Doles. Throughout his ordeals, he remained extremely close to the five children from his first marriage: sons Roy Jr., Anthony, and John and daughters Joni and Ruth.

Campanella was voted into the National Baseball Hall of Fame in 1969. He died of a heart attack at his home in Woodland Hills, California, on June 26, 1993, at the age of 71. That evening, flags at Dodger Stadium flew at half-mast and the scoreboard showed highlights of Campanella’s career. Alston, his mentor, remembered him this way: “I’ve never seen a more enthusiastic guy on a ball field, one who got more sheer joy out of playing.”