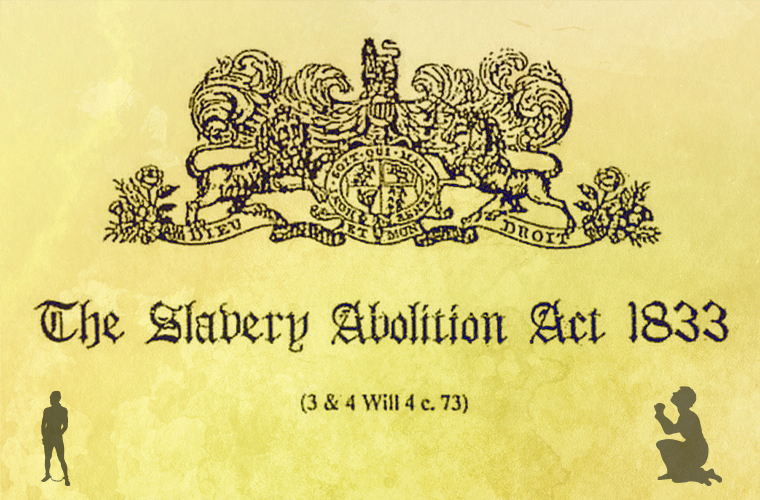 Slavery Abolition Act, (1833), in British history, was the act of Parliament that abolished slavery in most British colonies, freeing more than 800,000 enslaved Africans in the Caribbean and South Africa as well as a small number in Canada. It received Royal Assent on August 28, 1833, and took effect on August 1, 1834.
Background

Several factors led to the Act’s passage. Britain’s economy was in flux at the time, and, as a new system of international commerce emerged, its slaveholding Caribbean colonies—which were largely focused on sugar production—could no longer compete with larger plantation economies such as those of Cuba and Brazil. Merchants began to demand an end to the monopolies on the British market held by the Caribbean colonies and pushed instead for free trade. The persistent struggles of enslaved Africans and a growing fear of slave uprisings among plantation owners were other major factor.

Legal challenges to slavery in British North America
British abolitionists had actively opposed the transatlantic trade in African people since the 1770s. (Several abolitionist petitions organized in 1833 alone collectively garnered the support of 1.3 million signatories.) Such antislavery views spread to Upper Canada (later Canada West), influencing the passage thereof the 1793 Act to Limit Slavery, the first such legislation in the British colonies.

In the eastern colonies of Lower Canada (what is now Québec), Nova Scotia, and New Brunswick, however, abolitionist attempts had been unsuccessful. In 1793, for instance, Pierre-Louis Panet introduced a bill to the National Assembly to abolish enslavement in Lower Canada, but the bill languished over several sessions and never came to a vote.

Instead, individual legal challenges first raised in the late 1700s undermined the institution of enslavement in these areas. One important case arose in February 1798, when an enslaved woman named Charlotte was arrested in Montréal and refused to return to her mistress. She was brought before James Monk, a justice of the King’s Bench with abolitionist sympathies, who released her on a technicality. According to British law, enslaved persons could be detained only in houses of corrections, not common jails, and no houses of correction existed in Montréal. Charlotte and another enslaved woman named Judith were accordingly freed that winter. Monk stated in his ruling that he would apply this interpretation of the law to subsequent cases. Another significant 1798 case came before the courts in Annapolis Royal, Nova Scotia, when a local military officer, Frederick William Hecht, sought to establish his title to an enslaved woman named Rachel Bross. After a lengthy trial, the jury rejected Hecht’s claim, ruling instead that Bross was a free servant.

Rulings in such cases did not always favor emancipation, however. Only two years after the trials of Charlotte and Bross, an enslaved woman named Nancy petitioned for her freedom in the New Brunswick courts. Fourteen years earlier, Nancy had run away with her son and three others, but they were caught and returned to her owner, a farmer and loyalist settler named Caleb Jones. The challenge filed by her attorneys was that slavery was a socially accepted custom but was not officially recognized in New Brunswick. The judges’ decision was split, and Nancy remained enslaved.

Impact of the Act
The Slavery Abolition Act did not explicitly refer to British North America. Its aim was rather to dismantle the large-scale plantation slavery that existed in Britain’s tropical colonies, where the enslaved population was usually larger than that of the white colonists. Enslaved Africans in British North America were relatively isolated and far smaller in number.

As an imperial statute, the Slavery Abolition Act liberated less than 50 enslaved Africans in British North America. For most enslaved people in British North America, however, the Act resulted only in partial liberation, as it only emancipated children under the age of six, while others were to be retained by their former owners for four to six years as apprentices. The British government made available £20,000,000 to pay for damages suffered by owners of registered slaves, but none of the money was sent to slaveholders in British North America. Those who had been enslaved did not receive any compensation either.

The Act also made Canada a free territory for enslaved American blacks. Thousands of fugitive slaves and free blacks subsequently arrived on Canadian soil between 1834 and the early 1860s.