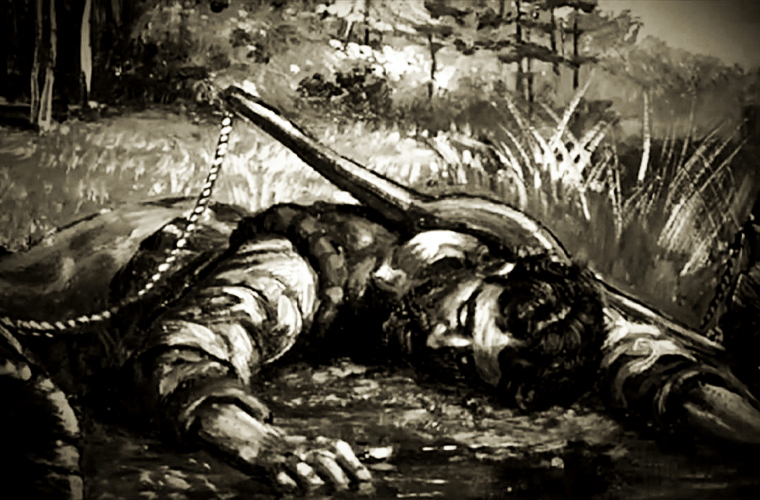 “The starving time” was the winter of 1609-1610, when food shortages, fractured leadership, and a siege by Powhatan Indian warriors killed two of every three colonists at James Fort. From its beginning, the colony struggled to maintaining a food supply. Trade relations with the Virginia Indian tribes were strained because a severe seven-year drought stressed food supplies for everyone in the region. Captain John Smith had some success trading European goods for corn in the first two years of the settlement, but his strongarm tactics also angered the tribal communities.

Aware of the food shortages, the Virginia Company sent a fleet of nine ships in July 1609 with new colonists and enough supplies to last through the winter. But the fleet was scattered and damaged by a hurricane. The largest ship, the Sea Venture, was shipwrecked on the Island of Bermuda with much of the supplies and leaders such as Captain Christopher Newport, Sir George Somers, and Sir Thomas Gates. In mid-August some of the ships arrived at Jamestown with 300 colonists and few supplies.

Smith was badly injured by a mysterious gunpowder explosion and forced to return to England in October. George Percy became President of the Council and faced the lethal combination of dwindling food supplies and an order by Chief Powhatan that his warriors should attack any colonists or livestock found outside the fort. Percy later wrote that “Indians killed as fast without [the fort] as Famine and Pestilence did within.” Percy calculated that meager rations of half a can of meal a day would get them only halfway through the winter. He wrote that to satisfy their “Crewell hunger,” some went into the woods looking for “Serpents and snakes, and to digge the earthe for wylde and unknowne Rootes,” but those people “weare Cutt off and slayne by the Salvages.”

Starvation weakened the colonists and led to sicknesses such as dysentery and typhoid. The colonists ate shoe leather and butchered seven horses brought from England the summer before on the ill-fated fleet. Percy wrote, “Then, having fed upon horses and other beasts as long as they lasted, we were glad to make shift with vermin, as dogs, cats and mice.” There were charges of cannibalism: Starving settlers dug up “dead corpses outt of graves” to eat them, and others “Licked upp the Bloode which ha[d] fallen from their weake fellowes.”Jamestown Rediscovery archaeologists in 2012 uncovered the first forensic evidence of survival cannibalism in a European colony in North America.

The Sea Venture survivors arrived from Bermuda in May 1610 to find only 60 colonists still alive in the fort. Thomas Gates realized there would be further starvation within a few weeks; on June 7, 1610, he announced the colonists would abandon Jamestown and sail for England. But their path home was blocked by the arriving ship of the new governor of the colony, Lord De la Warr, who insisted they return and rebuild Jamestown.

Josephine Baker, “Speech at the March on Washington”