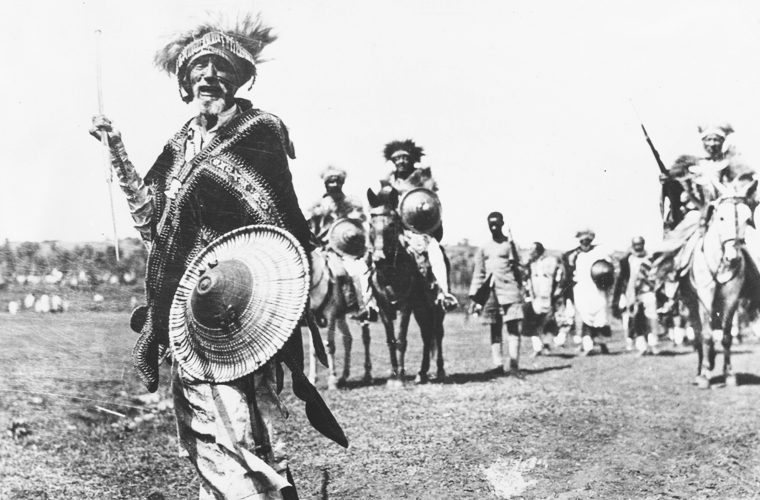 Battle of Adwa, Adwa also spelled Adowa or Italian Adua, (March 1, 1896), military clash at Adwa, in north-central Ethiopia, between the Ethiopian army of Emperor Menilek II and Italian forces. The Ethiopian army’s victory checked Italy’s attempt to build an empire in Africa. The victory had further significance for being the first crushing defeat of a European power by African forces during the colonial era.

Prelude
From the mid-19th century, Ethiopia was an aggregate of semi-independent kingdoms, which were presided over by the Ethiopian emperor. The 1889 death of Emperor Yohannes IV was followed by great disorder as his potential successors fought for ascendancy. The Italians had supported Sahle Miriam of Shewa (Shoa) in the years prior to this, supplying him with modern weaponry, ammunition, and funds that helped him acquire military strength. He used that strength to incorporate smaller Ethiopian kingdoms under his rule and, after Yohannes IV’s death, to secure his claim to the title of emperor, taking the name Menilek II. Additional ties of cooperation between Italy and Menilek were evident in the Treaty of Wichale(Ucciali), signed on May 2, 1889, which included Italy’s promise to provide a much-needed loan to Ethiopia. The treaty also included Ethiopia’s recognition of Italy’s claim over the neighboring coastal colony of Eritrea. One aspect of the treaty that would later lead to the conflict was Article XVII, reportedly interpreted by Menilek as meaning that Ethiopia could choose to utilize the Italian government in dealing with other foreign powers. Italian premier Francesco Crispi interpreted it as meaning that Ethiopia must utilize the Italian government, thereby implying the declaration of an Italian protectorate over Ethiopia. The discrepancy eventually came to light. Menilek first repudiated in September 1890 the treaty’s ambiguous Article XVII and then, in September 1893, repudiated the treaty altogether. Menilek, conscious of the Italian troops in the neighboring colony of Eritrea, began preparing to combat any attempt by the Italians to impose dominion militarily, which they initiated by early 1895.

Initial Fighting And Ethiopian Victory
Italian successes at the beginning of the campaign were brilliant but fruitless, and large Ethiopian armies were threatening the Italian outposts at the end of 1895. Menilek’s forces, which numbered more than 100,000, were well armed with modern weaponry. Menilek, however, shrewdly downplayed this military strength by leaking false reports indicating a much smaller number of troops under his command and by spreading rumors that there was widespread discord among his forces. The Italian governor and military leader of Eritrea, Gen. Oreste Baratieri, sighted Menilek’s forces on February 7, 1896, but was cognizant of the many challenges facing the Italian army at the time—inadequate supplies of food, water, clothing, and weapons that were in working order and a lack of reliable maps—and did not rush into battle, instead choosing to remain in position for as long as the supplies allowed. Menilek was in a similar situation, in danger of running out of food for his troops and hesitant to initiate a confrontation. The two armies bided their time, waiting for the other to strike first. On February 28 Crispi sent Baratieri a furious telegram to try to goad him into action. The next day, after discussing options with his generals—including retreat, which he initially seemed to favour—Baratieri was convinced to enter into battle. Despite some misgivings, he later gave the order to advance to Adwa with 14,500 men against an Ethiopian army of some 100,000. The Italian columns, in addition to having to deal with the lack of adequate supplies, were disorganized and unable to successfully navigate the terrain. Routed on March 1 by Menilek’s forces, the Italians retreated through difficult terrain.

The number of those in the Italian army who were killed is estimated to have been more than 6,000, of whom slightly more than half were Italian; the remainder were askari forces (African troops hired and trained by the Europeans). Additionally, between 3,000 and 4,000 of those fighting under Italian command were taken prisoner by the Ethiopians. Perhaps as many as 70 percents of Italy’s soldiers were thus killed or captured. More than 5,000 Ethiopian troops were killed and 8,000 wounded in the battle—a number greater than Italy’s losses, but a small percentage of all Ethiopian forces.

Outcome
Treaty of Addis Ababa, signed in October 1896, abrogated the Treaty of Wichale and reestablished peace. The Italian claim to a protectorate over all of Ethiopia was thereafter abandoned, and the Italian colony of Eritrea, finally delimited by a treaty of peace (September 1900), was reduced to a territory of about 200,000 square km (80,000 square miles). Menilek’s victory over the Italians gave him significant credibility with the European powers, bolstered his mandate at home, and provided the Ethiopian kingdom with a period of peace in which it was able to expand and flourish, in contrast to most of the rest of the African continent at that time, which was embroiled in colonial conflicts. Various treaties concluded with Italy, France, and Great Britain in the years up to 1908 fixed the borders of Ethiopia with the neighboring territories ruled by the European powers.