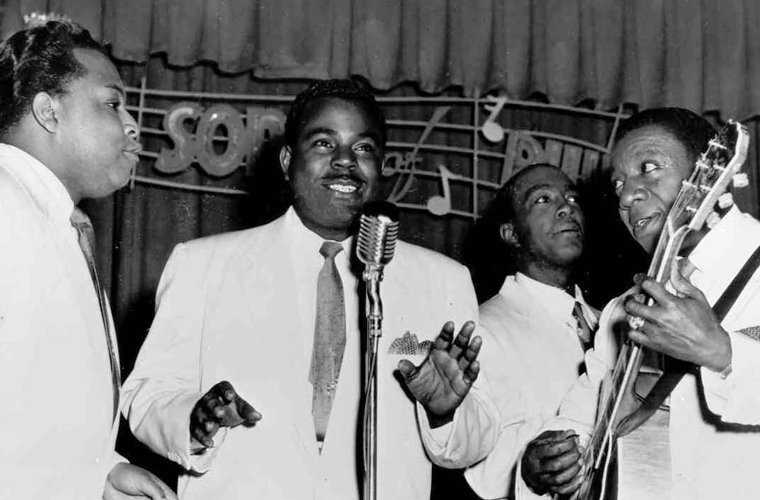 The Ink Spots, a musical quartet, originally included members Orville “Hoppy” Jones, Ivory “Deek” Watson, Jerry Daniels, and Charlie Fuqua. Some accounts claim Slim Greene also was a founding member. Influenced by the Mills Brothers, all four members sang together under the name “King, Jack, and the Jesters” in 1932. In late 1933, the group renamed itself the Ink Spots.

The Ink Spots toured Britain in 1934 and their overseas success earned them a recording contract with Victor Records. In 1935, they recorded their first four songs, including “Swinging on the Strings.”

In 1936, Daniels left the group and Bill Kenny replaced him. Around this time, the Ink Spots signed with Decca and began developing its distinct sound. The group’s vocal arrangements and use of guitar riff song introductions would influence future generations of doo-wop, rhythm and blues, and rock and roll musicians, including Elvis Presley and the Beatles.

Starting in the 1940s, the quartet sued imitation groups using the Ink Spots name, but its legal problems increased when Fuqua and Kenny each formed groups called the Ink Spots in 1952. The Decca Ink Spots officially played their last concert in 1953.