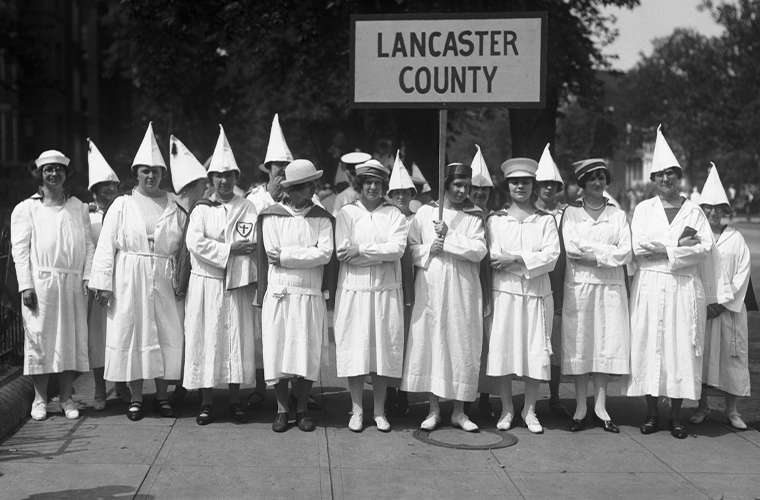 Not long after American women won the right to vote, a woman in Greene County, Indiana received an invitation to hear a lecture. All “the better known and educated women” had been asked to come, so naturally, she accepted. The topics ranged from the Bible and the importance of education to upholding “the American way.” The lecturer, also a woman, then asked the group if they would like to join a secret society dedicated to protecting those things.

“Why not,” the woman would later recall thinking. “It seemed a fun thing to do with our friends.” They were then given white robes and pointed white hoods that obscured their faces. One night they met and marched silently down the road, an enormous cross engulfed in flames looming in the darkness behind them.

Women have long been overlooked and under-credited, and their contribution to horror is no exception. The 1920s marked the heyday of the Women of the Klu Klux Klan — the autonomous arm of the notorious white supremacist group — springing, in a strange twist, out of a climate of hopefulness after suffrage when women felt emboldened to take part in civic life. Headquartered in Little Rock, Arkansas, with delegates in every state, the organization’s numbers reached half a million during this decade.

While the Greene County woman may have been naive, her fellow WKKK members were savvier. “Women were major actors in the klan, responsible for some of its most vicious, destructive results,” writes Kathleen Blee in Women of the Klan. According to Blee, the organization was chillingly effective — perhaps even more so than their male counterparts — in large part because they were better at public relations. (One of the women involved in the founding of the WKKK had originally been enlisted by the KKK to help clean up its image).

If the WKKK was more successful in advancing their xenophobic agenda, it was because they were better than the men’s group at hiding their white supremacist mission behind a facade of social welfare. “Are you interested in the Welfare of our Nation? As an Enfranchised woman are you interested in better government? Should we not interest ourselves in better education for our children?” their pamphlets read. They organized parades and food drives, with the benefits often funneled directly to Klan families. Drawing from the church-supper tradition, their gatherings could, at first glance, be mistaken for sorority events. One Indiana woman Blee interviewed described them as “a way to get together and enjoy.” But simultaneously they lobbied for national quotas for immigration, racial segregation, and anti-miscegenation laws — and proselytized the “eternal supremacy” of the white race as an opposition to the “rising tide of color.”

The WKKK served to normalize the extremist actions of the men’s KKK but also advanced a version of the white Protestant agenda that was all their own. As increasing numbers of immigrants crossing the United States borders simultaneous with women’s suffrage, the WKKK’s nativism mingled with a strange breed of feminism. Their pamphlets announced “new days of freedom” for women. The male KKK wasn’t on board. They fiercely opposed changes in gender roles and used the symbol of the white damsel in distress to galvanize racist fury. Black men were a threat to their pure, Protestant women, and the KKK would protect them. This trope was most starkly captured by the scene of D.W. Griffith’s 1915 pro-KKK film, Birth of a Nation, where a white woman heroically leaps off a cliff to avoid being tainted by a black man (played by a white actor in blackface). In 1871, the KKK’s first Grand Wizard told a crowd, “Ladies were ravished by some of these negroes, who were tried and put in the penitentiary, but were turned out in a few days afterward.” Now the WKKK wanted to “stand alongside our men and help with protecting” instead of being “patted on the head and told not to worry.”

Blinded by smoke from burning crosses, 1956. After the 1920s, women in the KKK continued to emphasize their klan’s flamboyance and ritual.

The WKKK recruited gentile, female, native-born citizens older than 18, so long as they were not Catholic, socialists, or communists. They needed to be a resident in a Klan jurisdiction for six months and endorsed by at least two Klanswomen. Blee explains that contrary to the stereotype of right-wing extremists, members of the WKKK were not socially marginal, from the “downwardly mobile sectors of society who focus their resentments against society on racial, ethnic, and religious minorities.” In fact, many came from stable, middle-class communities

Like their male counterparts, the WKKK made a fetish of cultish flamboyance and ritual: they referred to themselves as an “invisible empire,” and had a language all their own. The world outside Klan’s activities was the “alien world.” Days of the week were not Monday, Tuesday, and Wednesday, etc., but “desperate, dreadful, desolate, doleful, dismal, deadly, and dark.” There were similarly melodramatic codes for months of the year, and they reorganized historical time to relate to the American Revolution and the Klan’s birth.

As the 1920s came to a close, the racism and violence of both the KKK and WKKK became harder to conceal. As one WKKK leader admitted in The New York Times, “the actual working out of the ideals has not been so good.” By the end of the decade, the organization had dispersed, though no doubt, the women continued to channel their xenophobic ideologies into other forms of civic engagement such as PTAs, school boards, and local and national politics. As Blee noted, “the political lesson of Klan history for those working toward a more just and egalitarian society, is the ease with which racism and intolerance appealed to ordinary people in ordinary places.”