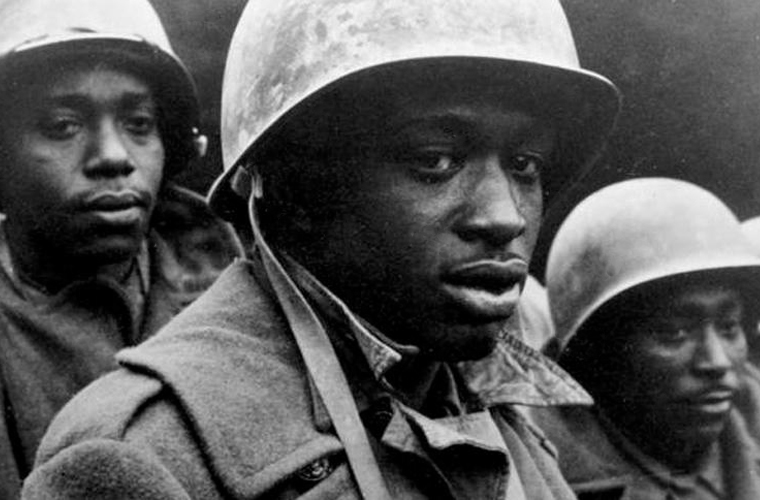 Throughout our country’s history, African Americans have looked hopefully to military service as a way to achieve racial equality and opportunity.

But the dream that donning a military uniform and fighting for national honor would earn black soldiers respect and human dignity conflicted with the status black people in America had held for centuries — and often resulted in disappointment.

The enslavement of black people in the United States for more than 200 years built wealth, opportunity, and prosperity for millions of white Americans. At the same time, American slavery assigned to black people a lifelong status of bondage and servitude based on race, and created a myth of racial inferiority to justify the racial hierarchy. Under this racist belief system, whites were hard working, smart, and morally advanced, while black people were dumb, lazy, childlike, and uncivilized.

The idea that black people were naturally and permanently inferior to white people became deeply rooted in an individual’s minds, state and federal laws, and national institutions. This ideology grew so strong that it survived the abolition of slavery and evolved into new systems of racial inequality and abuse. In the period from 1877 to 1950, it took the form of lynching and racial terror.

For a century after emancipation, African American servicemen and the black community at large “staked much of their claims to freedom and equality on their military service, and had cited it as a vindication of African American manhood.”

Fighting for democracy was emblematic of the equality African Americans desired, and by serving their country, black veterans displayed their attachment to the nation and commitment to American values. In the face of this persistent racial hierarchy, and despite being denied full citizenship, many African Americans fought for the United States and for the aspiration that conditions would improve.

Instead, black soldiers who served in the armed forces from the Civil War to World War II, during the height of racial terror and violence, faced hatred and racism even in “peace” time.

On the other side of African Americans’ hopes were whites’ fears that black veterans asserting and demanding equality would disrupt the social order built on white supremacy and the racialized economic order from which many benefitted. Many politicians feared that black veterans would believe they were equal to whites and worthy of more than poverty, poor educational opportunities, and menial labor, and would no longer be satisfied to work on farms for low wages. Southern politicians, in particular, feared that independent and empowered black veterans would lead other African Americans — especially in the South, where most still lived — to challenge racial segregation and subordination in bold and dangerous ways. In the minds of fearful whites, black veterans’ training in weapons and combat and their success defending the nation in battle were more a threat than a source of pride, and many voiced concerns about how those skills could be used at home. Black veterans epitomized white Southern fears of “a black population that had either forgotten or outright rejected its place in the region’s racial hierarchy.”

The hopeful determination of black veterans seeking equality after military service challenged the defiant determination of white Americans to reinforce white supremacy, maintain racial inequality, and suppress black veterans’ potential as leaders and change agents. During the Civil War, white leaders viewed black soldiers as liable to use violence to destroy the social order. Throughout the lynching era, African American veterans were seen as an increasingly imminent threat to the South’s racial caste system.

This tension made black servicemen targets for discrimination, mistreatment, and violence within the military and for deadly racial terror at home.