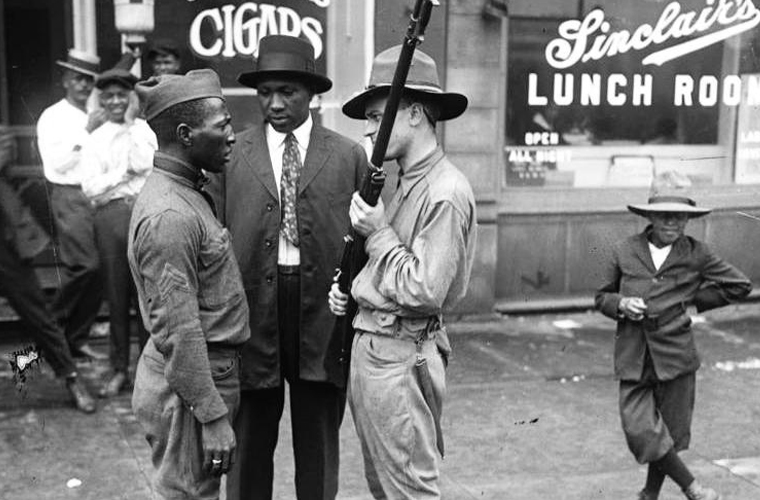 African American veterans returned home from World War I eager to continue the fight for freedom at home. Many black soldiers returned from the war with a newfound determination to bring freedom to their own shores. As W.E.B. Du Bois proclaimed in his 1919 Crisis editorial, Returning Soldiers, “We return. We return from fighting. We return fighting. Before World War I, the NAACP had just 9000 members nationwide and only 300 in the South, but by the early 1920s, national membership had risen to 100,000, with Southern chapters constituting a slight majority. African Americans had returned home from the war with new and contagious confidence and assertiveness.

In Elaine, Arkansas, whites attacked a meeting of black sharecroppers who were organizing to demand fairer treatment in the cotton market. After a white person was shot, federal troops were called in to “quell” the violence, but instead, they joined white mobs in hunting black residents for several days. More than 200 black men, women, and children were killed.

Many African American soldiers returning from World War I were outspoken against racial discrimination, inequality, and violence that continued to plague black communities, and they played an active role in defending their communities during Red Summer. “By the God of Heaven,” W.E.B. Du Bois said of returning veterans, “we are cowards and jackasses if now that the war is over, we do not marshal every ounce of our brain and brawn to fight a sterner, longer, more unbending battle against the forces of hell in our own land.” Black veterans stood “on the front lines” as they “defended themselves from the white onslaught,” while those with light complexions reportedly infiltrated the white mobs to gather intelligence. The Washington Bee reported that those fighting back against the mobs included black veterans “who had served with distinction in France, some of whom had been wounded fighting to make the world safe for democracy.”

After World War I, an estimated 100,000 black veterans moved North, where they still encountered segregation, racism, and inequality. One of the first victims of the Red Summer violence in Washington, D.C., was a 22-year-old black veteran named Randall Neal. In Chicago, the “presence and inspiration of black veterans, particularly those of the 370th Infantry Regiment” was critical to black Chicagoans forced to “defend themselves from white aggression.”

In the fall of 1919, Dr. George Edmund Haynes completed a report on the causes and scope of Red Summer. He reported that “the persistence of unpunished lynching” contributed to the mob mentality among white men and fueled a new commitment to self-defense among black men who had been emboldened by war service. “In such a state of the public mind,” Dr. Haynes wrote, “a trivial incident can precipitate a riot.”