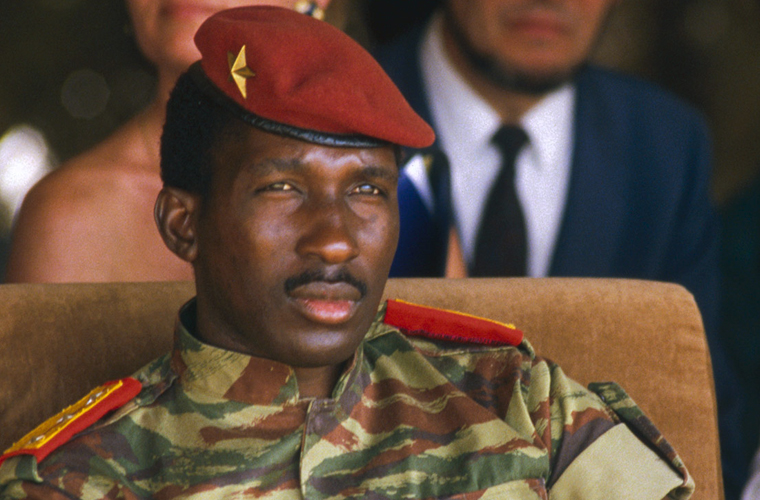 Thomas Sankara, (born December 21, 1949, Yako, Upper Volta [now Burkina Faso]—died October 15, 1987, Ouagadougou, Burkina Faso), military officer and proponent of Pan-Africanism who was installed as president of Upper Volta (later Burkina Faso) in 1983 after a military coup. He held that position until 1987 when he was killed during another coup.

Sankara’s Roman Catholic parents wanted him to be a priest, but he opted for a military career instead. In 1970, at the age of 20, Sankara was sent for officer training in Madagascar, where he witnessed a popular uprising of students and workers that succeeded in toppling Madagascar’s government. Before returning to Upper Volta in 1972, Sankara attended a parachute academy in France, where he was further exposed to left-wing political ideologies. In 1974 he earned much public attention for his heroic performance in the border war with Mali, but years later he would renounce the war as useless and unjust.

By the early 1980s, Burkina Faso was being rocked by a series of labor union strikes and military coups. Sankara’s military achievements and charismatic leadership style made him a popular choice for political appointments, but his personal and political integrity put him at odds with the leadership of the successive military governments that came to power, leading to his arrest on several occasions. In January 1983, Sankara was selected as the prime minister of the newly formed Council for the Salvation of the People (Conseil de Salut du Peuple; CSP), headed by Jean-Baptiste Ouédraogo. This post provided him with an entryway into international politics and a chance to meet with leaders of the nonaligned movement, including Fidel Castro (Cuba), Samora Machel (Mozambique), and Maurice Bishop (Grenada). Sankara’s anti-imperialist stance and grassroots popularity increasingly put him at odds with conservative elements within the CSP, including President Ouédraogo. Sankara was removed as prime minister in May and arrested once again. On August 4, 1983, Blaise Compaoré, Sankara’s close friend and fellow army colleague, led a group that freed Sankara, overthrew the Ouédraogo regime, and formed the National Council of the Revolution (Conseil National de la Révolution) with Sankara as its president.

Sankara declared the objectives of the “democratic and popular revolution” to be primarily concerned with the tasks of eradicating corruption, fighting environmental degradation, empowering women, and increasing access to education and health care, with the larger goal of liquidating imperial domination. During the course of his presidency, Sankara successfully implemented programs that vastly reduced infant mortality, increased literacy rates, and school attendance, and boosted the number of women holding governmental posts. On the environmental front, in the first year of his presidency alone 10 million trees were planted in an effort to combat desertification. On the first anniversary of the coup that had brought him to power, he changed the country’s name from Upper Volta to Burkina Faso, which means roughly “land of upright people” in Mossi and Dyula, the country’s two most widely spoken indigenous languages.

Despite the great strides that were made, there was growing dissent in the country, partly because of economic problems and opposition from traditional quarters to some of Sankara’s more progressive social policies. His administration gradually lost popular support, and internal conflict within his government grew as well. On October 15, 1987, Sankara was assassinated in a coup led by Compaoré and two others.