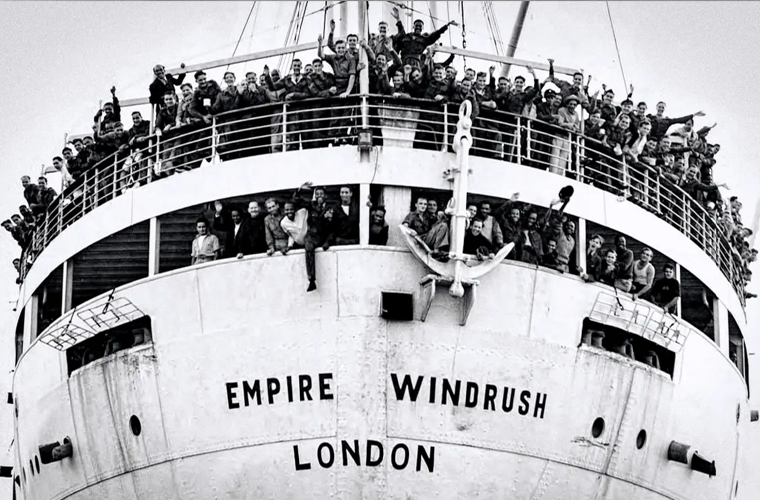 ‘As we passed through the white cliffs of Dover, it was beyond imagination,’ recalls Edwin Hilton Hall, one of several hundred excited West Indian passengers on board the HMT Empire Windrush on 22 June 1948.

‘I just came out having something to eat in the mess hall and I saw this crowd with the camera-men at the docks and I was waving my teacup, waving to be noticed.’ It’s widely accepted that black people have been in Britain for centuries. As the historian, Peter Fryer asserts in Staying Power, ‘Among the troops [of the Roman imperial army] defending Hadrian’s wall in the third century AD was a ”division of Moors”.’

The arrival of the Windrush has been characterized as the foundation story of mass migration to Britain. But of course, there were earlier ships. The Ormonde and the SS Almanzora had arrived from the West Indies the year before. In fact, Sam King who’d served in the RAF during the Second World War went back home to Jamaica on the return leg of the Almanzora in 1947. He did so with great tribulation as there’d been a recent hurricane, destroying most of the plantations.

‘About a half mile outside of Kingston Harbour, I saw men diving for pennies and shillings, risking their lives.’ King’s mind was soon made up to return to England after seeing a local advert for passage on the Empire Windrush for £28 10s. To raise the money his family had to sell three cows.

‘I remember my mother washing the very black thing I use to clean my shoes, saying, ”You’re going back to England. Everything must be clean.” And the morning of the 24 May 1948, I boarded the ship, bound for London.’ King and his fellow passengers were confident of their welcome, both because of the new British Nationality Act of that year (conferring British citizen status on colonial subjects), and also because the West Indians were needed to bolster the workforce.

In 1947, Winston Churchill had implored the more than half a million ‘lively and active citizens in the prime of life who had applied to immigrate to mostly white Commonwealth countries not to desert Britain. ‘We cannot spare you!’ he warned. But such pleas fell on deaf ears. The extraordinary position of the Windrush in our collective consciousness came about through the intense curiosity of it being the first ship to arrive following the Nationality Act, and through the memorable images of passengers captured and archived.

Without compelling photos and film repeatedly shown over the years, the myth of the Windrush would not have hardened into a foundation story. Even the truth of its arrival was skewed by the absence of women and children, as well as the focus on the inaccurate reports of the passengers as ‘492 men from Jamaica’. Other islanders were on board the Windrush, together with Polish travelers and more than 200 women.

Had journalists interviewed Carlton ‘Stanley’ Gaskin at the time, he’d have complicated their narratives with news of the discovery of a female stowaway whose passage they’d paid for by putting on an impromptu concert with Calypsonians, Lords Kitchener and Beginner, and the jazz singer Mona Baptiste.

As the ship drew closer to England unfounded rumors spread that the West Indians would not be allowed to disembark and sent back. Sam King recalls that the passengers became increasingly anxious when they learned that the Minister for the Colonies was suggesting their stay would be temporary.

Reportedly, Arthur Creech Jones had offered the reassurance: ‘Do not worry. These people are just adventurers. They will not last longer than one British winter.’ And 11 Labour MPs had also warned Prime Minister Clement Attlee that: ‘An influx of colored people domiciled here is likely to impair the harmony, strength, and cohesion of our public and social life and to cause discord and unhappiness among all concerned.’

Discord and unhappiness were certainly true when West Indians did disembark from the Windrush and subsequent ships and started looking for accommodation. Waverley Bushell still remembers the hurt of rejection: ‘There were all these little cards in shops window that said, ”No blacks”, so you knew that you weren’t wanted. Up to now, after 50-odd years in this country, I would be apprehensive going up to anybody’s step in case the person who owns that house is white – up to now.’

What saved the Windrush Generation was their enormous font of humor, and ability to turn up the collar of their coats and walk on when subjected to slights and reversals. This was particularly the case, as Charles Johnson wittily recounts when they met discrimination searching for employment: ‘Apparently, I always was just a few hours too late. Boy, the Englishman can be the nicest man out when he is telling you no!’

Jobs and housing may have proved impenetrable barriers but interracial love and affection were more porous. The West Indian men had a winning reputation for charm, much appreciated by women such as Dorothy Leigh: ‘We was dancing at the Rialto Ballroom, Long Eaton and I fell on the floor and he [George] picked me up and that’s it. I don’t know whether it was love at first sight but he was polite, he was a gentleman.’

Women such as Dorothy and Bet Lowe, though, would have to shut out criticism from white men who sneered that by dating black men they ‘must be up for anything, you know, must be a bit of a slag really.’ In those early years, the story of the Windrush Generation was often a case of one step forwards, two steps back. Perhaps the biggest threat came during the Notting Hill riots of 1958. Previously the West Indians hadn’t thought of themselves as a homogenous group (smaller islanders were critical of Jamaicans who were said to be more aggressive).

But Rena Khublall, originally from Guyana, was not alone in cheering Jamaicans’ fearlessness when trading blows with Teddy boys who, tooled up with iron bars and butchers’ knives, descended on Notting Hill: ‘Jamaicans make the place safer for people to walk around because there were Teddy boys and the skinheads,’ recalled Rena.

‘And a black woman alone on the street on a Sunday afternoon or on a Saturday evening, you would not have felt safe at all.’ There had always been the suggestion that West Indians were only in Britain temporarily; that they came with five-year plans to save and prosper, and then return to the Caribbean. But the rising importance of the West Indian front room in the 1970s was an indication that decades after arrival, they’d made their peace with their new homeland and had decided to settle.

The aesthetics of the front room, a West Indian equivalent to the Victorian parlor, especially left an imprint on the artist Michael McMillan. A child of the 70s, he can still picture how ‘Big people would be chatting in the front room over the mellow voice of Jim Reeves crackling from the radiogram…The rarely used gold-rimmed glasses amongst many from the glass cabinet [and] the drinks trolley with Stone’s ginger wine and ice from the plastic pineapple ice bucket.’ The trick, finally, was to make a home from home. Notwithstanding the injustice of the Windrush scandal, the elderly West Indian generation of pioneers have come to see their time in the UK as the success story that it undoubtedly is. It’s one which Alford Gardner, now 94, would never trade: ‘If I had to do it all over, I wouldn’t change a thing. I wouldn’t change a single thing.’