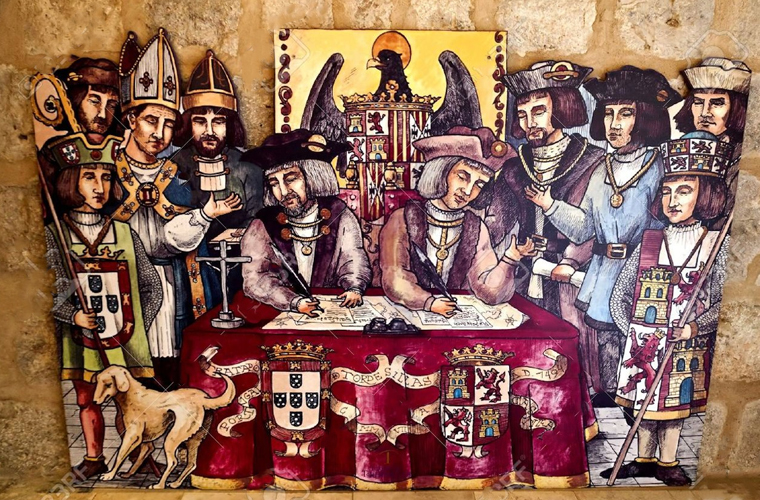 Treaty of Tordesillas, (June 7, 1494), an agreement between Spain and Portugal aimed at settling conflicts over lands newly discovered or explored by Christopher Columbus and other late 15th-century voyages.

In 1493, after reports of Columbus’s discoveries had reached them, the Spanish rulers Ferdinand and Isabella enlisted papal support for their claims to the New World in order to inhibit the Portuguese and other possible rival claimants. To accommodate them, the Spanish-born Pope Alexander I issued bulls setting up a line of demarcation from pole to pole 100 leagues (about 320 miles) west of the Cape Verde Islands. Spain was given exclusive rights to all newly discovered and undiscovered lands in the region west of the line. Portuguese expeditions were to keep to the east of the line. Neither power was to occupy any territory already in the hands of a Christian ruler.

No other European powers facing the Atlantic Ocean ever accepted this papal disposition or the subsequent agreement deriving from it. King John II of Portugal was dissatisfied because Portugal’s rights in the New World were insufficiently affirmed, and the Portuguese would not even have sufficient room at sea for their African voyages. Meeting at Tordesillas, in northwestern Spain, Spanish and Portuguese ambassadors reaffirmed the papal division, but the line itself was moved to 370 leagues (1,185 miles) west of the Cape Verde Islands, or about 46°30′ W of Greenwich. Pope Julius II finally sanctioned the change in 1506. The new boundary enabled Portugal to claim the coast of Brazil after its discovery by Pedro Álvares Cabral in 1500. Brazilian exploration and settlement far to the west of the line of demarcation in subsequent centuries laid a firm basis for Brazil’s claims to vast areas of the interior of South America.