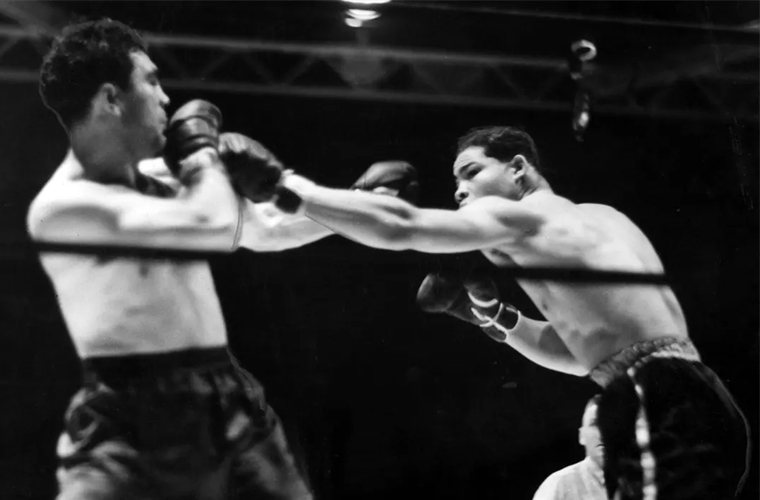 As Adolf Hitler and the Nazi Party loomed over Europe, an American and a German boxer squared off in the ring. They’d meet again two years later.

Joe Louis wanted redemption, to remain the heavyweight boxing champion of the world and to avenge his sole defeat. Max Schmeling wanted repetition, the chance to regain the title he had lost and to defeat the younger man, just as he had beaten him two years earlier. As the bell rang and they walked to the center of a 20-foot square boxing ring in the middle of New York’s Yankee Stadium, all each man wanted was to have his hand raised in sporting victory.

But for the more than 70,000 in attendance, and the millions listening to radio broadcasts around the world, there was so much more at stake. The year was 1938, and as storm clouds gathered over Europe, African American Louis and Germany’s Schmeling were unintentional combatants in a preliminary proxy skirmish.

Schmeling was born in Klein Luckow, Germany, in 1905; Louis in Lafayette, Alabama nine years later. Schmeling made his debut as a professional boxer in 1925 and began fighting in the United States—then the undisputed global epicenter of the sport—in 1928. In 1930, he won the heavyweight championship against Jack Sharkey, before losing it to the same man two years later.

By 1936, he had seven losses to go with his 48 wins, and at 31 was considered old for a heavyweight boxer. He seemed the perfect foil for unbeaten up-and-coming, hard-hitting American phenom Louis.

But Schmeling had studied Louis and had noticed flaws in the American’s technique—particularly the way, after throwing his left hand, he briefly dropped it low, leaving his chin exposed to Schmeling’s powerful right hand. Schmeling exploited that mistake mercilessly, beating Louis for 12 rounds until finally knocking him out and handing him his first defeat.

It would prove to be the high point of Schmeling’s career. Although he had been a popular figure in the New York fight community, by the time he and Louis fought again two years later, he and the country he represented were viewed through a much darker lens. It was becoming impossible to ignore the growing threat posed by Nazi Germany to those within and beyond its borders.

While Schmeling did not support the Nazis and never joined the party, he “enjoyed a comfortable relationship” with them. He gave the Nazi salute in the ring after beating American Steve Hamas in Munich. He went hunting with Nazi military leader Herman Göring and attended the annual rallies in Nuremberg.

Following his win over Louis, he watched films of the fight with Adolf Hitler, who insisted they be shown across Germany. Joseph Goebbels publicly praised him. Hitler’s soon-to-be-wife Eva Braun privately confessed in her journal her obsession with him. (Conversely, Schmeling resisted pressure to split with his Jewish-American manager, and sheltered two young Jewish boys during Kristallnacht.)

After James Braddock (known as the “Cinderella Man”) claimed the heavyweight championship in 1935, he refused to give Schmeling a shot at his crown. Instead, he defended against Louis in 1937, who knocked him out in the eighth round to become heavyweight champion of the world. But Louis insisted that his victory was incomplete.

“I ain’t no champion ‘till I beat Schmeling,” he declared.

The American sporting public eagerly devoured news of the fight’s build-up, seeing it as an opportunity for an American sporting hero to stick a thumb in the eye of Hitler’s Aryan dreams. The irony, of course, was that, while African Americans understandably revered Louis as a hero, much of white America draped its support in racist disdain. Margaret Garrahan of the Birmingham News, for example, opined that Louis was a “tan-skinned throw-back to the creature of primitive swamps who gloried in battles and blood.”

Writing in 2007, boxing historian Thomas Hauser noted that, “It was the first time that many white Americans openly rooted for a black man against a white opponent. It was also the first time that many people heard a black man referred to simply as ‘the American.’” Louis himself pierced the hypocrisy of the situation more prosaically: “White Americans—even while some of them still were lynching black people in the South—were depending on me to K.O. Germany.”

The fight itself was dramatic but brief. Louis poured everything into his preparation, while Schmeling stated publicly that he could see no way the American could correct his previous mistakes. The German was wrong. Louis tore into Schmeling from the opening bell, dropping him three times and knocking him out in the very first round. The fight had lasted just two minutes and four seconds.

“Now I feel like the champ,” said Louis, who would go on to make a total of 25 consecutive title defenses, a record that still stands. He is widely regarded as one of the greatest professional prizefighters who ever lived.

“Looking back, I’m almost happy I lost that fight,” Schmeling said in 1975. “Just imagine if I would have come back to Germany with a victory. I had nothing to do with the Nazis, but they would have given me a medal.”

Louis and Schmeling met again when World War II had ended and became friends, bonded in perpetuity by the intensity of their rivalry. Louis died in April 1981 at the age of just 66. Schmeling was among his pallbearers.