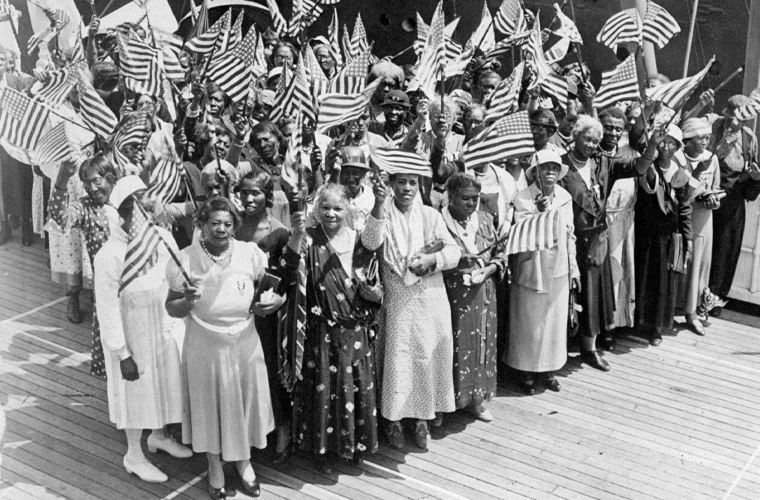 In the summer of 1930, Bessie Strawther took a train from her home in Urbana, Ohio to New York City. It was the first leg of a long trip that would finally allow her to visit her son’s grave more than a decade after his death in World War I. Henry Strawther, a black American private in a segregated infantry unit, died fighting the German army in October 1918 — just weeks before the Armistice of November 1918.

Strawther, like tens of thousands of other members of the military, remained buried in Europe either because of circumstances or by family choice. But after significant and sustained pressure on Congress from the American War Mothers and the newly formed American Gold Star Mothers, President Calvin Coolidge in March 1929 signed legislation authorizing Gold Star Mothers — or widows if mothers were deceased — to travel to Europe as guests of the U.S. government to see the final resting places. A fund of $5 million was allocated to cover two-week, all-expense-paid pilgrimages.

Before the women left home, the Army’s Quartermaster Corps sent each traveler a list of what to pack and gave detailed travel arrangements. The War Department warned the women to wear “somewhat heavier clothing” to protect them against “the cold and dampness.” Because of the lack of laundry facilities, the quartermaster urged them to pack “sufficient underwear, nightgowns, stockings, and handkerchiefs.” The travel arrangements included dates and times of travel as well as berth, seat, or room number for the ship, trains, and hotel rooms. Everything was taken care of.

Strawther was to be among the first group of nearly 7,000 women making the Gold Star pilgrimages over the course of three years. But shortly after she arrived in New York, she declined to take the next step of the journey — the War Department required black mothers and widows to travel on freight ships instead of the luxury liners the white travelers were boarding, and their accommodations in Paris would also be segregated. In New York, white women were already staying in expensive hotels while black women slept in Harlem’s YWCA.

“I am not going to France,” Strawther wrote to a prominent member of the NAACP, adding, “I do not want to be a disgrace to my son and the race.”

In some ways, the segregation was not a surprise given the segregated army structure and the fact that the American Gold Star Mothers did not grant membership to black women, but it was no less insulting.

By late May, 55 black women had signed a letter drafted by NAACP officials in which they pledged to refuse the trip rather than submit to segregation. “Twelve years after the Armistice, the high principles of 1918 seem to have been forgotten,” it read. “We who gave and who are colored are insulted by the implication that we are not fit persons to travel with other bereaved ones.”

The Chicago Defender, the prominent black newspaper, responded by running a front-page article with a swelling headline: “Gold Star Black Mothers: STAY OUT OF FRANCE If Forced to Sail on Jim Crow Ships!”

The director of the pilgrimage program, Gen. J. L. DeWitt, tried to soften the tension with the NAACP. “The composition of the groups,” he wrote, was “determined after the most careful consideration of the interests of the pilgrims themselves. No discrimination whatever will be made as between the various groups.”

President Herbert Hoover, who was under increasing pressure to address the matter, referred all questions to the War Department, which, in its replies, both eschewed any suggestion of wrongdoing and illuminated how the military viewed the matter.

Assistant Secretary of War F. H. Payne responded to one letter of complaint, “After a thorough study, the conclusion was reached that the formation of white and colored groups of mothers and widows would best assure the contentment and comfort of the pilgrims themselves,” according to the National Archives.

Payne continued, “No discrimination as between the various groups is contemplated. All groups will receive like accommodations at hotels and on steamships, and the representatives of the War Department will, at all times, be as solicitous of the welfare of the colored mothers and widows as they will be of the welfare of those of the white race.” He added: “It would seem natural to assume that these mothers and widows would prefer to seek solace in their grief from companions of their own race.”

As such, the women were presented with a seemingly impossible choice: take a stand against segregation by joining the growing protest organized by the NAACP and black newspapers, or live with the government’s stipulations and make what would likely be a one-in-a-lifetime voyage to see the final resting place of their sons and husbands. Ultimately, most would choose the latter.

“Ever since I lost my son in 1918 I have been wanting to come,” wrote one mother. “I would have come over on a cattle-boat. I would have swam if possible. I love my race as strongly as any other but when I heard that the United States was going to send us over I could not refuse.”

Four years later, after struggling with her decision, Strawther finally sailed with the very last party of black women — by far the largest one, suggesting many also struggled with their decisions before yielding to the government’s terms.

Approximately two dozen black women refused the trip and stuck with the decision.

Mabel Johnson of Philadelphia wrote to the War Department that despite “an intense desire to visit the grave of my beloved husband” she would “not be a party to this conspiracy against the dead.”

When Grace F. Taylor, a seamstress from Cambridge, Massachusetts, received a letter from another Gold Star widow who had made the pilgrimage and implored her to reconsider, Taylor replied that she considered the second-class treatment of black Gold Star mothers and widows a closed and private matter that could not be rectified.

“I wish to say right here that I need no urging from anyone pertaining to making the pilgrimage to France, as my mind was completely settled when I canceled my invitation last summer,” wrote Taylor. “I am a Massachusetts-born woman and my parents before me and I strongly resent any such stand as the United States government has taken. I feel they have grossly insulted our race and that they can never make amends.”