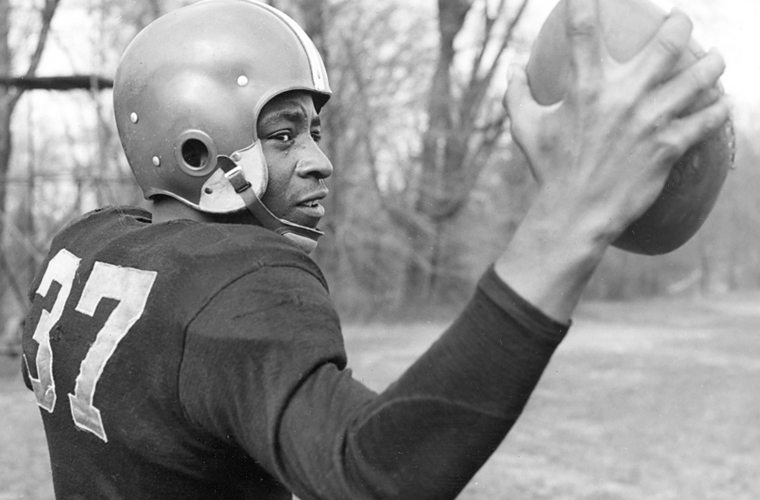 William ‘Willie the Pro” Thrower was the first African American to play as a quarterback in the National Football League (NFL). Thrower was born on March 22, 1930, in New Kensington, Pennsylvania. Although his statistics as a college and high school football player are good, and his pro statistics are decent, his greater achievement was in breaking the racial barrier of what was then a predominantly white sport.

Thrower first started playing competitive football during high school and became an All-American.  That achievement brought some interest from some major colleges and universities. Duffy Daugherty, who was then the assistant coach at Michigan State University, recruited Thrower. Since a number of players from his high school team attended Michigan State, Thrower chose the institution for both academic and athletic reasons.  Although he was only 5 feet 11 inches tall, he could throw the ball as far an accurately as anyone then playing in college.

Thrower was not the first African American to play the position of quarterback at a Big Ten conference school but he was the first in the post-World War II era.  Playing time, however, was scarce and scattered since he competed against two other All-American quarterbacks at Michigan State, Al Dorow, and Tom Yewcic.  As a backup quarterback, Thrower helped lead the 1952 MSU Spartans to an undefeated 9-0 season and a national title. During that season he completed 29 passes out of 43 attempts, stacking up 400 yards and scoring 5 touchdowns.

Although Thrower was not drafted in 1953, he was offered a one-year contract with the Chicago (Illinois) Bears to play as a quarterback. He accepted and broke a major racial barrier in the National Football League when on October 18th, 1953, he was called in as a substitute quarterback in a game against the San Francisco (California) 49ers.  With that game, he became the first African-American quarterback to play in the NFL. The Bears won the game 35-28, and Thrower threw for 27 yards.

Willie Thrower played only one more game in the 1953 season and was cut by the Bears at the end of the year.  Nonetheless, his achievement stood.  It would be another 15 years before another African American quarterback, Marlin Briscoe, would play for the Denver (Colorado) Broncos in 1968. Following his brief NFL career, Thrower went to the Canadian Football League where he played for the Winnipeg Blue Bombers and a semi-pro team in Toronto.  He retired early from the semi-pro team at the age of 27 because of a shoulder injury.

After his retirement, Thrower became a social worker in New York City, New York.  He eventually returned to his hometown of New Kensington, Pennsylvania in 1969, and opened two taverns. On February 20th, 2002, William “Willie the Pro” Thrower died of a heart attack, leaving behind a wife, Mary, and two children. Although his football stats were not Hall of Fame status, his achievement on the field helped set the stage for a new generation of African American quarterbacks.