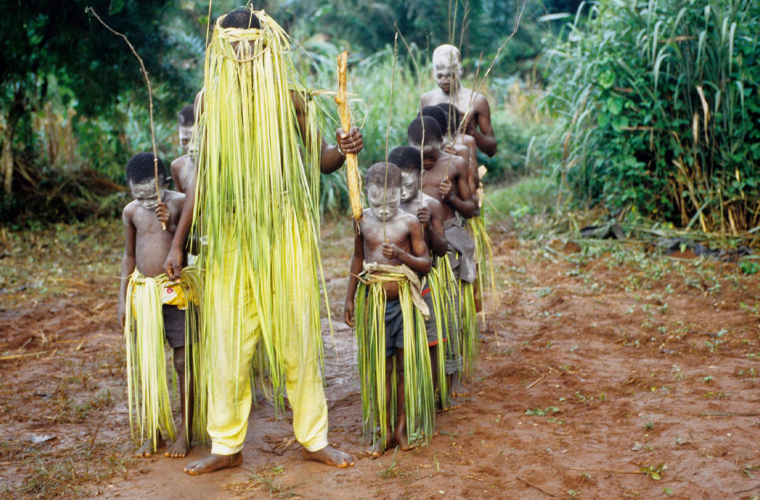 In African tradition the dead are revered. They live on. As soon as a relative dies, he is brought into a temple for the dead. The Fon and the Gun of Benin call this „Yoho“ , and is represented ba a Asen. The Asen is a statue that symbolizes the soul. The living thank the dead with ceremonies. There are different forms of Asen, according to the region they come from.

In the traditional Yoruba society the Egungun  ( the returned dead spirit) is revered. In Yoruba tradition  the ancestors come back from the „other side“ to be honored.  The belief  in the resurrection of the dead is celebrated with different rites. There are also different kinds of Egungun. The Egungun are seen as jokers, and when they appear they draw large crowds. They are friends of the children as well as adults.. In their colorful robes they dance to the sound of the gangan drums accompanied by  hand clapping of the children. Egungun is also feared. As a god he deserves awe and is holy. His robe is frightning, and the uninitiated are not allowed to touch it. The belief  that touching the robe will kill the uninitiated, because of this the Egungun always has body guards with long sticks around him to make sure that nobody comes to close.. The uninitiated may never enter the Igbale or Egungun convent. If it does happen the Marino or watchman will beat the person. This is done to prevent the memory of the dead will not be desecrated.