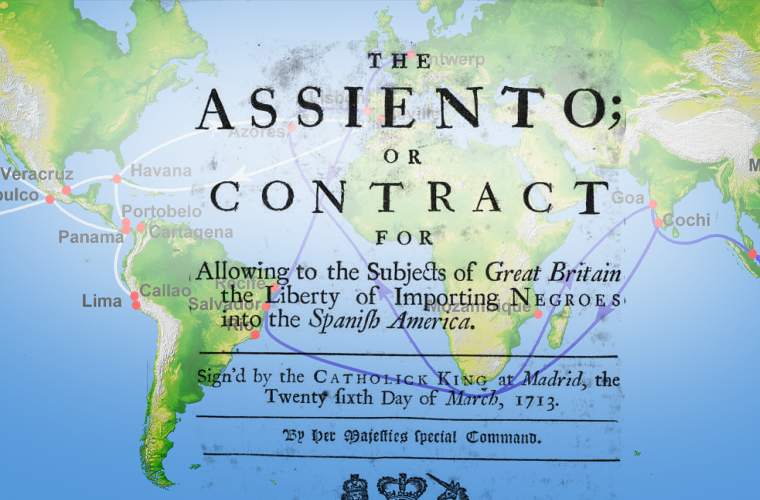 The asiento de negros, between the early 16th and the mid-18th century, was an agreement between the Spanish crown and a private person or another sovereign power by which the latter was granted a monopoly in supplying African slaves for the Spanish colonies in the Americas. The contractor (asentista) agreed to pay a certain amount of money to the crown for the monopoly and to deliver a stipulated number of male and female slaves for sale in the American markets. The first such contractor was a Genoese company that in 1517 agreed to supply 1,000 slaves over an eight-year period. In 1528 an agreement was reached with a German firm to supply 4,000 slaves. For its monopoly, the firm paid 20,000 ducats annually to the crown. Each slave was sold at a price not exceeding 45 ducats.

Until the 18th century individual Spaniards, as well as subjects of Portugal, France, and Great Britain, entered into such contracts. In spite of heavy taxation, government interference, and unsettled trade conditions, all of which greatly curtailed the profitability of asientos, foreigners, nevertheless, sought them because they provided the chance to share in the lucrative Spanish-American trade and, especially, to acquire some of the gold and silver bullion produced by the slave trade.

The last and most notable asiento was that granted to the British South Sea Company, in 1713, by a provision in the Treaty of Utrecht. This contract entitled the company to send 4,800 slaves to Spanish America annually for 30 years and to send one ship (navío de permiso) each year to engage in general trade. The company found the enterprise unprofitable because war and other adverse conditions usually prevented importation to the American markets, while an annual tax to the Spanish crown of £34,000 for the first 4,000 slaves had to be paid whether or not they were imported. Also, the legal trade was accompanied by illicit traffic that continually exacerbated Spanish-British relations, leading to the War of Jenkins’ Ear in 1739. This disrupted the profitable British trade with peninsular Spain. Spain renewed the asiento at the Treaty of Aix-la-Chapelle in 1748, but two years later the British relinquished their rights in exchange for a payment of £100,000 from Spain. Between 1600 and 1750 an estimated 450,000 Africans were dispatched to Spanish America under the asiento system.

The South Sea Company and the Slave Trade