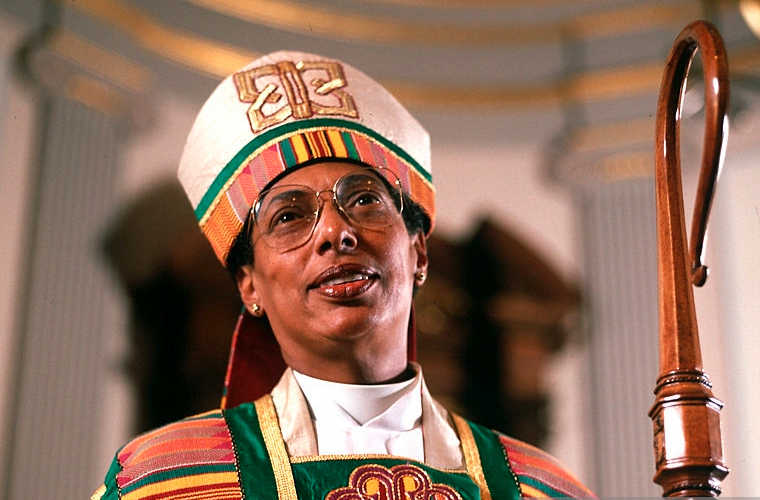 During her childhood, Harris regularly attended services at a local Episcopal church with her parents, and she played piano for the church school. She graduated from the Philadelphia High School for Girls in 1948, enrolled in but did not complete college, and later graduated from Charles Morris Price School of Advertising and Journalism. She joined a public relations firm in 1958 and was hired as a public relations executive by Sun Oil in 1968. She continued to attend church as she pursued her professional career, and in the 1960s she joined the activist Church of the Advocate. She also took part in the civil rights movement, registering African American voters in Mississippi and participating in Martin Luther King’s Selma march.

Harris supported the women’s rights movement and campaigned for the full involvement of women in the Anglican clergy. She approved of the controversial ordination of 11 women priests in 1974, and soon afterward she decided to study for the priesthood herself. She received special training designed for recruits to the Anglican clergy at the Metropolitan Collegiate Center and at Villanova University (1977–79). After further study in England, she was ordained a deacon in September 1979 and an Episcopal priest in October 1980. In the early 1980s, she served at St. Augustine of Hippo Church in Norristown, Pennsylvania, and at Philadelphia County Prison, where she was a chaplain. From 1984 to 1988 she was executive director of the Episcopal Church Publishing Company and executive director of The Witness, a socially progressive Episcopal journal. On February 11, 1989, despite the opposition of the archbishop of Canterbury and others, Harris was consecrated suffragan (assistant) bishop for the diocese of Massachusetts. As bishop, she continued her advocacy for women and ethnic minorities, spoke against those at the Lambeth Conference in 1999 who questioned the value of women priests, and welcomed the appointment of other women as bishops. She retired on November 1, 2002, after reaching the mandatory retirement age. From 2003 to 2007 Harris served as assisting the bishop in the diocese of Washington, D.C.