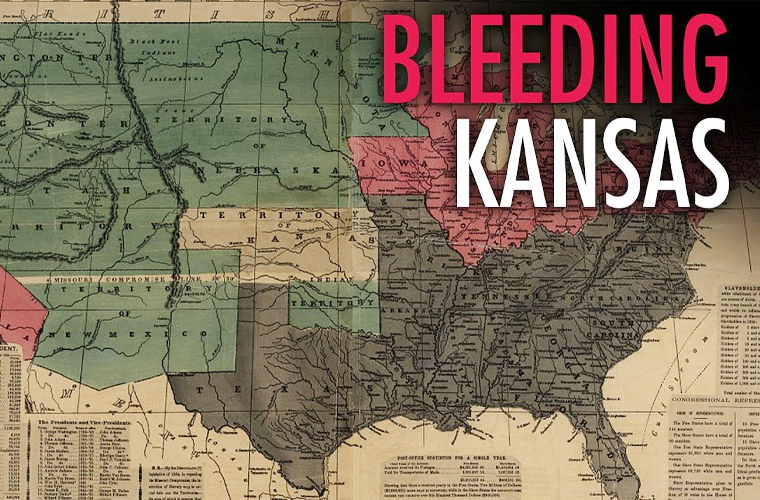 Bleeding Kansas, (1854–59), small civil war in the United States, fought between proslavery and antislavery advocates for control of the new territory of Kansas under the doctrine of popular sovereignty (q.v.). Sponsors of the Kansas–Nebraska Act (May 30, 1854) expected its provisions for territorial self-government to arrest the “torrent of fanaticism” that had been dividing the nation regarding the slavery issue. Instead, free-soil forces from the North formed armed emigrant associations to populate Kansas, while proslavery advocates poured over the border from Missouri. Regulating associations and guerrilla bands were formed by each side, and only the intervention of the Governor prevented violence in the Wakarusa War, launched in December 1855 over the murder of an antislavery settler. “Bleeding Kansas” became a fact with the Sack of Lawrence (May 21, 1856), in which a proslavery mob swarmed into the town of Lawrence and wrecked and burned the hotel and newspaper office in an effort to wipe out this “hotbed of abolitionism.”

Three days later, an antislavery band led by John Brown retaliated in the Pottawatomie Massacre (q.v.). Periodic bloodshed along the border followed as the two factions fought battles, captured towns, and set prisoners free. A political struggle to determine the future state’s position on slavery ensued centered on the Lecompton Constitution (q.v.) proposed in 1857. The question was finally settled when Kansas was admitted as a free state in January 1861, but, meanwhile, “Bleeding Kansas” had furnished the newly formed Republican Party with a much needed antislavery issue in the national election of 1860. Claims for $400,000 in damages sustained in the border war were later approved by territorial commissioners.