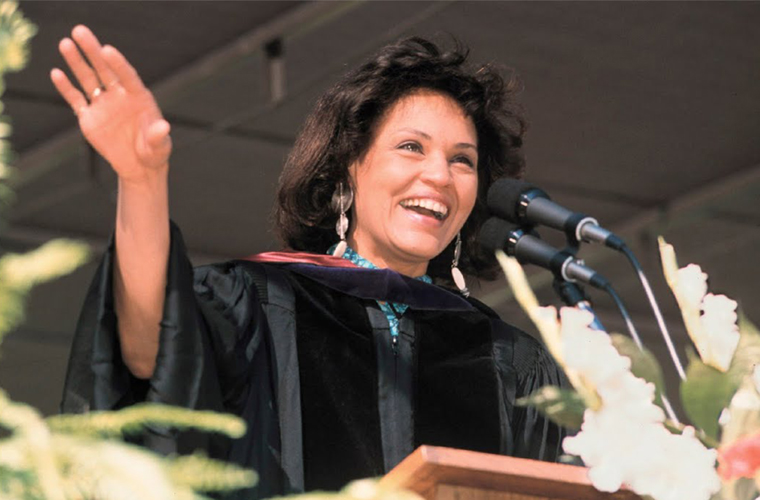 Charlayne Hunter-Gault holds a place in Georgia civil rights history as one of the first two African American students admitted to the University of Georgia. Also known for her career as an award-winning journalist, Hunter-Gault is respected for her work on television and in print.

Childhood and Family
Charlayne Hunter was born on February 27, 1942, in Due West, South Carolina. The oldest child of Althea Ruth Brown and Charles S. H. Hunter Jr., Hunter moved frequently during her childhood as her father, an army chaplain, was transferred from one base to another. Although her family lived together briefly during her father’s postings in California, Ohio, and Indiana, Hunter spent most of her childhood in Covington and Atlanta. She and her brothers, Henry and Franklyn, were brought up primarily by their mother and their maternal grandmother, an avid reader and an early influence on Hunter’s interest in newspapers. In 1954 Hunter began the eighth grade at Atlanta’s most prestigious Black public high school, Henry McNeal Turner High. She left halfway through the year when her family relocated to Alaska with her father. After nine months in Alaska, her parents separated, and Hunter returned to Atlanta with her mother and brothers.

Once again at Turner High School, Hunter was active in numerous clubs and student organizations, including the school newspaper, the student council, and the honor society. During her junior year, she surprised her Methodist family by converting to Roman Catholicism. Elected homecoming queen her senior year, Hunter graduated in 1959, third in her class.

The Desegregation of the University of Georgia
Interested in journalism since her adolescence, Hunter wanted to attend a college with a strong journalism program. In Georgia, this meant the University of Georgia (UGA) in Athens, which did not admit African Americans, so Hunter applied to several midwestern schools. During her last year at Turner, however, Hunter was approached by a group of Atlanta’s Black civic leaders who were looking for talented students to challenge segregation in Georgia’s colleges and universities. After first visiting Georgia State College of Business Administration (later Georgia State University) in Atlanta, Hunter and her classmate Hamilton Holmes, Turner High School’s valedictorian, decided to apply to UGA. Hunter and Holmes were denied admission, and in the fall of 1959 Hunter enrolled at Wayne State University in Detroit, Michigan.

While Hunter began her studies in Michigan, she and Holmes continued submitting their applications to UGA each quarter, and their attorneys, Constance Baker Motley of the National Association for the Advancement of Colored People’s Legal Defense and Education Fund and Atlanta lawyers Donald Hollowell, Vernon Jordan, and Horace Ward, challenged the admissions decision. After two years of legal battles Judge William Bootle, a U.S. District Court judge, issued his ruling on the matter on January 6, 1961, stating that the “plaintiffs are qualified for and entitled to immediate enrollment at the University of Georgia.” Thus Charlayne Hunter and Hamilton Holmes became the first African American students in the school’s history.

Hunter and Holmes arrived on the UGA campus on January 9, 1961, to register for classes. The new students were met with taunts and racial epithets. Two days later, after a basketball game, a crowd gathered outside Hunter’s dormitory, smashing windows with bottles and bricks. The mob was finally dispersed by Athens police armed with tear gas. That night the Georgia State Patrol escorted the students back to their homes in Atlanta, and the University of Georgia suspended both Hunter and Holmes, supposedly for their own safety.

Days later, after a new court order was issued, the students returned to campus and resumed their classes. As the writer Calvin Trillin noted in his account of their experience, Hunter “attracted much more attention than Hamilton,” who lived off campus and went home on weekends. Hunter was sometimes met with animosity from students who jeered at her while she crossed campus, but she formed several friendships, including one with Walter Stovall, a fellow journalism student. They married in 1963, had a daughter, and divorced a few years later.

Journalism Career
Hunter graduated from UGA in 1963 and accepted her first job as an editorial assistant at the New Yorker magazine in New York City. After advancing to the position of staff writer, she left the magazine to accept a Russell Sage Fellowship for one year, then worked as a reporter and evening anchor for WRC-TV in Washington, D.C., for another year. Hunter returned to print journalism in 1968, joining the metropolitan staff of the New York Times and establishing the newspaper’s Harlem bureau. While working at the paper, Hunter married Ronald Gault, a banker, and had a son.

Hunter-Gault left the New York Times in 1978 to join PBS’s MacNeil/Lehrer Report, becoming a national correspondent and filling in as anchor when the program expanded to become The MacNeil/Lehrer NewsHour (later The NewsHour with Jim Lehrer). Hunter-Gault left public television in 1997 to join her husband, who had been transferred to South Africa; she became the chief correspondent in Africa for National Public Radio (NPR). She departed NPR in 1999 to join CNN, where she served as the network’s bureau chief and correspondent in Johannesburg, South Africa, until 2005.

As a journalist, Hunter-Gault has received numerous awards, including two National News and Documentary Emmy Awards as well as two Peabody Awards.

Hunter-Gault and the University of Georgia Today
Despite her difficulties as a student at UGA, Hunter-Gault has maintained close ties with the university. In 1985, in celebration of the school’s bicentennial, UGA created the annual Holmes-Hunter Lecture. Hunter-Gault returned to campus to deliver the commencement address in 1988; she was the school’s first Black graduation speaker. In 1992 Hunter-Gault published a memoir of her childhood and her years at UGA, In My Place, and together with Holmes, established an academic scholarship for African American students.

In 2001 the Academic Building where Hunter-Gault and Holmes first registered for classes at UGA was named the Holmes-Hunter Academic Building to mark the fortieth anniversary of the school’s desegregation. Ten years later, as part of UGA’s celebration of the event’s fiftieth anniversary, Hunter-Gault donated her papers to the Richard B. Russell Library for Political Research and Studies.