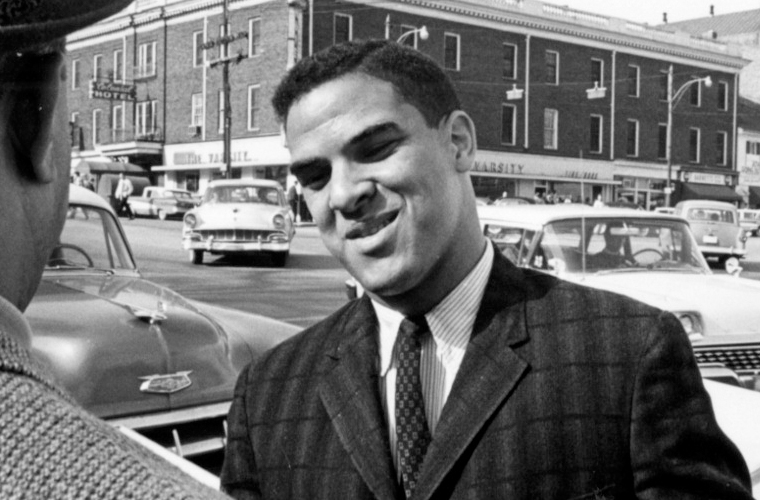 Hamilton Holmes is best known for desegregating the University of Georgia (UGA) in Athens. One of the first two African American students admitted to UGA in 1961, Holmes was also the first Black student admitted to the Emory University School of Medicine in Atlanta two years later.

Hamilton Earl “Hamp” Holmes was born July 8, 1941, in Atlanta. His father, Alfred “Tup” Holmes, was an Atlanta businessman, and his mother, Isabella, was a schoolteacher. As a child, Holmes was studious and athletic. He knew early on that he wanted to be a physician, like his grandfather Hamilton Mayo Holmes. Holmes attended Atlanta’s Henry McNeal Turner High School, considered the most prestigious high school for Black students in Atlanta’s segregated public school system. He graduated from Turner in 1959 as valedictorian, having served as both presidents of his senior class and cocaptain of the school’s football team.

The University of Georgia
Holmes’s scholastic record and his athletic accomplishments brought him to the attention of Jesse Hill In the late 1950s. Hill, a member of the education committee of the Atlanta branch of the National Association for the Advancement of Colored People (NAACP), had begun recruiting promising Black students to challenge segregation in Georgia’s colleges. Hill met Holmes and fellow Turner graduate Charlayne Hunter (later Charlayne Hunter-Gault) in 1959 and took them to visit Georgia State College of Business Administration (later Georgia State University), which seemed the most promising campus for desegregation. Disappointed by the school’s lack of courses, Holmes suggested that he and Hunter apply to UGA instead. Although Holmes planned to attend Morehouse College in Atlanta, UGA would provide him access to science facilities not available at the historically Black school.

Holmes and Hunter applied to UGA for the fall 1959 quarter but were denied. Holmes subsequently enrolled in Morehouse, distinguishing himself as both a student and a football player. Meanwhile, a legal team that included Constance Baker Motley of the NAACP’s Legal Defense and Education Fund and Atlanta attorneys Donald Hollowell, Vernon Jordan, and Horace T. Ward (who had lost his own legal battle to enter UGA’s law school in the 1950s) worked on Holmes and Hunter’s behalf. The students resubmitted their applications each new quarter, but each time they were rejected for reasons usually related to space or application procedures. In September 1960 Hollowell and Motley filed for an injunction seeking to prohibit UGA from “refusing to consider [Holmes’s and Hunter’s] applications and those of other Negro residents of Georgia for admission to the University.” Their request was refused, but a full trial on the matter was later held in Athens in December 1960.

On January 6, 1961, Judge William Bootle issued his ruling, stating that Holmes and Hunter “would have already been admitted had it not been for their race and color.” As a result UGA immediately admitted the two, who became the university’s first African American students since its founding in 1785.

Holmes, then nineteen, registered at UGA’s Academic Building on January 9, 1961. He and Hunter were met with crowds shouting racial slurs and chanting, “Two, four, six, eight. We don’t want to integrate!” On January 11, after a basketball game, a riot broke out outside of Myers Hall, where Hunter lived. Bricks, rocks, and bottles were thrown; the mob dispersed only after Athens police, armed with tear gas, and Dean William Tate arrived. That night the university suspended Hunter and Holmes, citing safety reasons, and the state patrol escorted the students back to Atlanta. Within a few days, however, following a new court order, Holmes and Hunter returned to campus.

Medical Career
In the fall of 1963, Holmes became the first Black student admitted to the Emory University School of Medicine. After his 1967 graduation from Emory, Holmes began his residency at Detroit General Hospital, leaving in 1969 to serve as an army major in Germany. He returned to Emory to complete his residency, after which he became a member of the Emory faculty as an assistant professor of orthopedics. In the following years, he served as chief of orthopedics at the Veterans Administration hospital in Atlanta, opened a private practice, and became medical director of Grady Memorial Hospital before finally being named head of orthopedic surgery at Grady as well associate dean at Emory.

Holmes did not visit UGA for many years, stating that his “time as a student there was very bad.” In the early 1980s, however, he helped plan the school’s bicentennial celebration, and in 1983, twenty years after graduating, Holmes became the first African American member of the Board of Trustees of the UGA Foundation. In 1985, UGA’s bicentennial year, the school established the annual Holmes-Hunter Lecture. In 1992 Holmes and Hunter-Gault, in turn, established an academic scholarship for African American students attending UGA.

Holmes died in his Atlanta home on October 26, 1995, two weeks after quadruple bypass surgery. He is survived by his wife, Marilyn Vincent Holmes; his son, Hamilton Jr., who graduated from UGA in 1990; and his daughter, Alison. In 2001, marking the fortieth anniversary of desegregation at UGA, the school’s Academic Building was renamed the Holmes-Hunter Academic Building.

In 2004 Georgia Public Broadcasting aired Hamilton Earl Holmes: The Legacy Continues, a documentary about the life of Holmes. Produced by the Foot Soldier Project for Civil Rights Studies at the University of Georgia, in conjunction with the Richard B. Russell Library for Political Research and Studies, the film won a Bronze Telly Award in 2005.