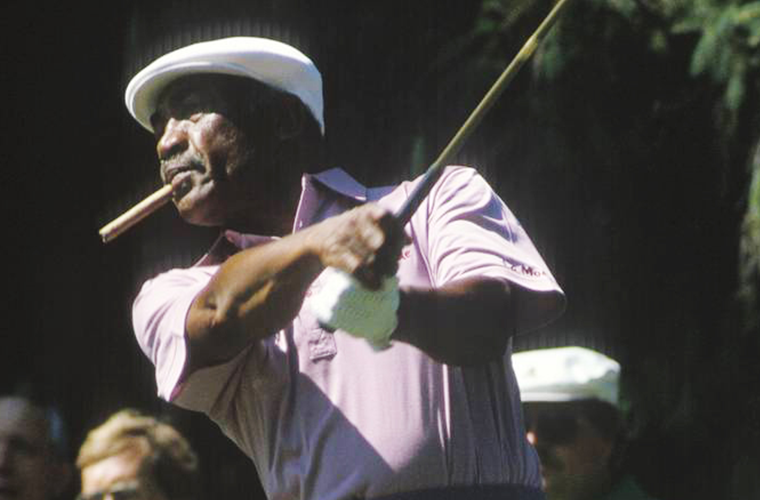 Charles Sifford was an African-American championship golfer who was instrumental in desegregating the PGA. Born on June 2, 1922, in Charlotte, North Carolina, Charles Sifford developed a passion for golf, going on to win multiple Negro Open championships and challenging the Professional Golf Association’s whites-only rule. Sifford succeeded in desegregating the organization despite harassment and death threats and was a contender in subsequent PGA tours. He wrote the 1992 autobiography Let Me Play. Sifford died on February 3, 2015, at age 92.

American golfer Charles Sifford was born on June 2, 1922, in Charlotte, North Carolina. Considered the Jackie Robinson of golf, Charlie Sifford broke the game’s stringent color barrier in 1961 when he became the first black athlete to compete on the PGA Tour. His early exposure to golf came on the courses of North Carolina, where Sifford worked as a caddie. He earned 60 cents a day on the course—nearly all of which went into the pocket of his mom to help keep the household going.

Sifford was a quick learner, however, and by the age of 13, he could shoot par. He realized then that he wanted to make golf his full-time job. He also realized that he wanted what, to many, seemed impossible: the chance to play in golf’s biggest tournaments against its best players. As a young golfer, Sifford strung together a living. He turned to coaching and directing the game of big band leader and singer Billy Eckstine. He also played, picking up impressive victories at non-PGA-sanctioned events. He dominated the Negro National Open, capturing the title six times in the 1950s. It helped that he had the encouragement and friendship of some of the sports’ most prominent black athletes; men such as professional boxers “Sugar” Ray Robinson and Joe Louis, as well as pitcher Don Newcombe.

The list also included Jackie Robinson, who’d broken baseball’s color barrier in 1947. The same year he broke into the major leagues, Robinson counseled Sifford on the golfer’s quest to make it on the PGA tour. “He asked me if I was a quitter,” Sifford later recounted. “He said, ‘OK if you’re not a quitter, go ahead and take the challenge. If you’re a quitter, there’s going to be a lot of obstacles you’re going to have to go through to be successful in what you’re trying to do.’ I made up my mind I was going to do it. I just did it. Everything worked out perfectly, I think.”Meanwhile, as the Civil Rights era started to take shape, the pressure was mounting on the PGA to strip out its offensive “Caucasian Only” membership clause from its bylaws.

The first major hurdle was crossed in 1948 when African-American golfers Bill Spider and Teddy Rhodes finished with good enough scores at the Los Angeles Open to earn automatic entry into the PGA-sponsored Richmond Open in California. But paranoid tour officials blocked their entry. They also did some legal side-stepping by getting sponsors to agree to label their tournaments “Open Invitationals” in order not to invite black players to compete in the events.

Yet, for Sifford, some important groundwork had been laid. In 1957, he made history when he not only qualified for the Long Beach Open but won it, making him the first African-American golfer to beat white players in a PGA co-sponsored tournament. Four years later he broke further ground when, under pressure from the California attorney general, the PGA permitted Sifford full membership on the tour.

It took a few years, but in 1967 Sifford made history again when he won the Greater Hartford Open—the first fully sanctioned PGA event ever won by an African American. Two years later he raised another trophy when he took home the top score at the 1969 Los Angeles Open. The excitement for everyone, both black and white, around Sifford’s wins was palpable.

“Charlie Sifford, Negro, 46, father of two, his own golf teacher, a short little man with a mustache, was a curious hero in a country-club sport,” wrote Sports Illustrated after the L.A. Open. “A black lady journalist raced onto the green and kissed him. Don Newcombe, the ex-Dodger pitcher, ran out and grabbed his hand. And huge, happy swarms of Charlie’s fans, all colors, surrounded him, tearfully delirious. Black guys who can’t play the game whooped, and white guys who’ve never seen a country club whooped.”

In all, Sifford would compete in some 422 PGA tournaments, coming in second twice, registering five third-place finishes, and winning nearly $350,000 in prize money. On the senior circuit, he was equally successful, winning the 1975 Seniors’ Championship and collecting $930,000 in winnings.

More importantly, he helped pave the way for future African-American golfers including Lee Elder, the first black to play the Masters in 1975; Calvin Peete, who notched 12 PGA victories, including The Players Championship; and, of course, Tiger Woods. “He took the punishment, the ridicule and he still persevered,” Earl Woods, Tiger’s dad, once said. “For that, he should always be remembered. Because nobody else did it but him. He was the first one.”

The most glaring admission from Sifford’s resume is The Masters, which did not begin inviting PGA winners to Augusta National Golf Course in Georgia until the 1970s. But the significance of Sifford’s achievements has not been lost on the still predominantly white golf world. In 2004, he was inducted into the World Golf Hall of Fame, just the 104th athlete and the first African American to receive the honor. Then, in early 2009, came the creation of the Charlie Sifford Exemption, which allows for the invitation of a player to the Northern Trust Open (formerly the Los Angeles Open) who represents the advancement of golf’s diversity. Sifford’s autobiography, Just Let Me Play, was published in 1992. In 2014, President Obama presented the trailblazing athlete with the Presidential Medal of Freedom, the nation’s highest civilian award.

Sifford died on February 3, 2015, at the age of 92. In a statement, PGA President Derek Sprague said, “His love of golf, despite many barriers in his path, strengthened him as he became a beacon for diversity in our game. By his courage, Dr. Sifford inspired others to follow their dreams. … Golf was fortunate to have had this exceptional American in our midst.”