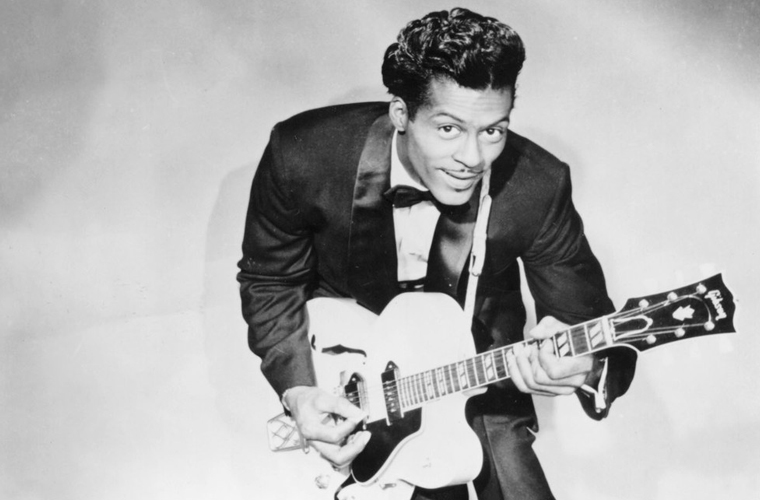 Chuck Berry, in full Charles Edward Anderson Berry, (born October 18, 1926, St. Louis, Missouri, U.S.—died March 18, 2017, St. Charles County, Missouri), American singer, songwriter, and guitarist who was one of the most popular and influential performers in rhythm-and-blues and rock-and-roll music in the 1950s, ’60s, and ’70s.

Raised in a working-class African American neighborhood on the north side of the highly segregated city of St. Louis, Berry grew up in a family proud of its African American and Native American ancestry. He gained early exposure to music through his family’s participation in the choir of the Antioch Baptist Church, through the blues and country-western music he heard on the radio, and through music classes, especially at Sumner High School. Berry was still attending high school when he was sent to a Missouri prison for young offenders to serve three years for armed robbery. After his release and return to St. Louis, he worked at an auto plant, studied hairdressing, and played music in small nightclubs.

Berry traveled to Chicago in search of a recording contract, and Muddy Waters directed him to the Chess brothers. Leonard and Phil Chess signed him for their Chess label and in 1955 his first recording session produced “Maybellene” (a country-and-western-influenced song that Berry had originally titled “Ida Red”), which stayed on the pop charts for 11 weeks, cresting at number five. Berry followed this success with extensive tours and hit after hit, including “Roll Over Beethoven” (1956), “School Day” (1957), “Rock and Roll Music” (1957), “Sweet Little Sixteen” (1958), “Johnny B. Goode” (1958), and “Reelin’ and Rockin’” (1958). His vivid descriptions of consumer culture and teenage life, the distinctive sounds he coaxed from his guitar, and the rhythmic and melodic virtuosity of his piano player (Johnny Johnson) made Berry’s songs staples in the repertoire of almost every rock-and-roll band.

At the peak of his popularity, federal authorities prosecuted Berry for violating the Mann Act, alleging that he transported an underage female across state lines “for immoral purposes.” After two trials tainted by racist overtones, Berry was convicted and remanded to prison. Upon his release, he placed new hits on the pop charts, including “No Particular Place to Go” in 1964, at the height of the British Invasion, whose prime movers, the Beatles and the Rolling Stones, were hugely influenced by Berry (as were the Beach Boys). In 1972 Berry achieved his first number one hit, “My Ding-A-Ling.” Although he recorded more sporadically in the 1970s and ’80s, he continued to appear in concert, most often performing with backing bands comprising local musicians. Berry’s public visibility increased in 1987 with the publication of his book Chuck Berry: The Autobiography and the release of the documentary film Hail! Hail! Rock ‘n’ Roll, featuring footage from his 60th birthday concert and guest appearances by Keith Richards and Bruce Springsteen.

Berry is undeniably one of the most influential figures in the history of rock music. In helping to create rock and roll from the crucible of rhythm and blues, he combined clever lyrics, distinctive guitar sounds, boogie-woogie rhythms, precise diction, an astounding stage show, and musical devices characteristic of country-western music and the blues in his many best-selling single records and albums. A distinctive if not technically dazzling guitarist, Berry used electronic effects to replicate the ringing sounds of bottleneck blues guitarists in his recordings. He drew upon a broad range of musical genres in his compositions, displaying an especially strong interest in Caribbean music on “Havana Moon” (1957) and “Man and the Donkey” (1963), among others. Influenced by a wide variety of artists—including guitar players Carl Hogan, Charlie Christian, and T-Bone Walker and vocalists Nat King Cole, Louis Jordan, and Charles Brown—Berry played a major role in broadening the appeal of rhythm-and-blues music during the 1950s. He fashioned his lyrics to appeal to the growing teenage market by presenting vivid and humorous descriptions of high-school life, teen dances, and consumer culture. His recordings serve as a rich repository of the core lyrical and musical building blocks of rock and roll. In addition to the Beatles and the Rolling Stones, Elvis Presley, Buddy Holly, Linda Ronstadt, and a multitude of significant popular-music performers have recorded Berry’s songs.

An appropriate tribute to Berry’s centrality to rock and roll came when his song “Johnny B. Goode” was among the pieces of music placed on a gold-plated copper phonograph record that was attached to the side of the Voyager 1 space probe and sent hurtling through outer space in order to give distant or future civilizations a chance to acquaint themselves with the culture of the planet Earth in the 20th century. In 1984 he was presented with a Grammy Award for lifetime achievement. He was inducted into the Rock and Roll Hall of Fame in 1986.