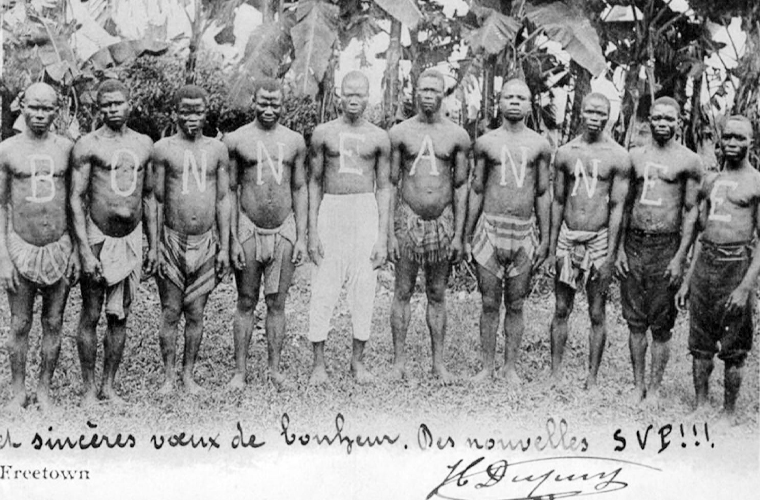 By the 1890s postcards were widely available throughout continental Europe. The postcards appealed to tourists looking for a souvenir of their travels abroad. Although travel was still largely limited to elites, it was becoming more accessible to the middle classes.

Postcards gave these new travelers a means to share their journeys with their friends and family at home. Postcards became such a popular commodity that the period from 1895 to the end of the Great War is now considered the golden age of the postcard.

The popularity of postcards extended to postcards depicting images from European colonial possessions as well. While postcards from Africa served to reinforce stereotypes about the colonies they also served a larger purpose.

This purpose was educational in nature and showed colonial West Africa as more than a place that confirmed the stereotypes the Europeans held about the region. These images delivered to their audience the possibilities and economic potential of the colonies.

More than any other photographic format, colonial-era postcard images of Africa and African peoples helped to reinforce and perpetuate 19th-century European stereotypes of Africa as the “dark continent”, devoid of history or culture.

As the antithesis of Western cultural superiority, Africans were characterized in postcard representations as “savage and uncivilized people”, an exotic other, with no cultural ownership. This stereotyped visual representation of African peoples played a critical role in Europe’s rationale for its so-called ‘civilizing mission’ in Africa.

In general, postcard production for the African continent focused on indigenous people and the civilizing effect of colonial-missionary systems. In addition to the imagery that attempted to define and classify anthropometric profiles of African ethnic “types”, postcard representations depicted dress and adornment, body decoration, indigenous settlements, scenes of daily activities, and ceremonies and rituals. Equally important, many postcards featured local chiefs or kings dressed in ceremonial regalia and other elite.

One of the most prominent themes of colonial-era postcards was imagery that documented the scope of colonial projects, including the construction of new buildings, roads, bridges, railroads, industries, and the exploitation of minerals and other natural resources.

Postcard representations also showed images of landscapes, cities, and towns before and in the early stages of “modern” development.

Postcard images depicting specific political or historical events such as the arrival and departure of important European dignitaries in Africa was another popular colonial postcard genre.

Another stereotyped image of colonial African postcards was the pervasive nude or semi-nude depictions of the body of indigenous African people, especially African women and girls.

This provocative stereotyped imagery was actively used in colonial propaganda campaigns to lure European men to the colonies for work or to make them enlist in the navy or colonial armies. A large series of semi-nude postcard images featuring male “warriors” with weapons were also widely distributed

Colonial photography was an integral part of European representation. Like guns and rifles, the camera was another equally prominent weapon, used for the perpetuation of racial discrimination and colonial governance.