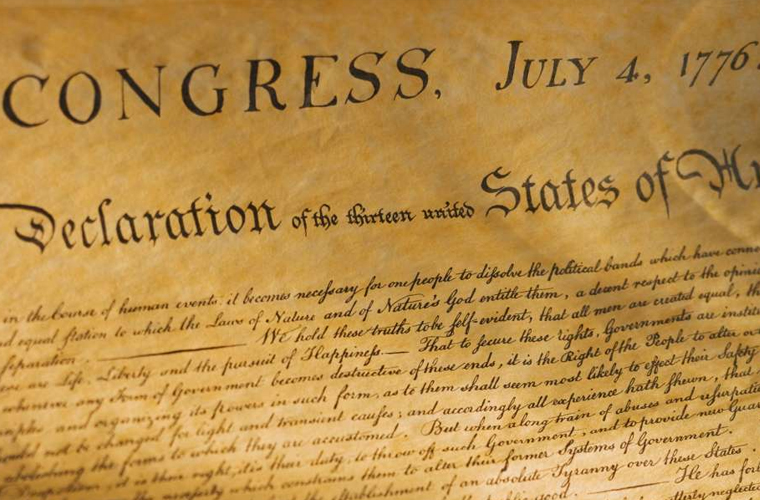 When the armed conflict between bands of American colonists and British soldiers began in April 1775, the Americans were ostensibly fighting only for their rights as subjects of the British crown. By the following summer, with the Revolutionary War in full swing, the movement for independence from Britain had grown, and delegates of the Continental Congress were faced with a vote on the issue. In mid-June 1776, a five-man committee including Thomas Jefferson, John Adams, and Benjamin Franklin was tasked with drafting a formal statement of the colonies’ intentions. The Congress formally adopted the Declaration of Independence–written largely by Jefferson–in Philadelphia on July 4, a date now celebrated as the birth of American independence.

Even after the initial battles in the Revolutionary War broke out, few colonists desired complete independence from Great Britain, and those who did–like John Adams– were considered radical. Things changed over the course of the next year, however, as Britain attempted to crush the rebels with all the force of its great army. In his message to Parliament in October 1775, King George III railed against the rebellious colonies and ordered the enlargement of the royal army and navy. News of his words reached America in January 1776, strengthening the radicals’ cause and leading many conservatives to abandon their hopes of reconciliation. That same month, the recent British immigrant Thomas Paine published “Common Sense,” in which he argued that independence was a “natural right” and the only possible course for the colonies; the pamphlet sold more than 150,000 copies in its first few weeks in publication.

Jefferson had earned a reputation as an eloquent voice for the patriotic cause after his 1774 publication of “A Summary View of the Rights of British America,” and he was given the task of producing a draft of what would become the Declaration of Independence. As he wrote in 1823, the other members of the committee “unanimously pressed on myself alone to undertake the draught [sic]. I consented; I drew it, but before I reported it to the committee I communicated it separately to Dr. Franklin and Mr. Adams requesting their corrections….I then wrote a fair copy, reported it to the committee, and from them, unaltered to the Congress.”

As Jefferson drafted it, the Declaration of Independence was divided into five sections, including an introduction, a preamble, a body (divided into two sections) and a conclusion. In general terms, the introduction effectively stated that seeking independence from Britain had become “necessary” for the colonies. While the body of the document outlined a list of grievances against the British crown, the preamble includes its most famous passage: “We hold these truths to be self-evident; that all men are created equal; that they are endowed by their Creator with certain inalienable rights; that among these are life, liberty and the pursuit of happiness; that to secure these rights, governments are instituted among men, deriving their just powers from the consent of the governed.”

The Continental Congress reconvened on July 1, and the following day 12 of the 13 colonies adopted Lee’s resolution for independence. The process of consideration and revision of Jefferson’s declaration (including Adams’ and Franklin’s corrections) continued on July 3 and into the late morning of July 4, during which Congress deleted and revised some one-fifth of its text. The delegates made no changes to that key preamble, however, and the basic document remained Jefferson’s words. Congress officially adopted the Declaration of Independence later on the Fourth of July (though most historians now accept that the document was not signed until August 2).

As the first formal statement by a nation’s people asserting their right to choose their own government, the Declaration of Independence became a significant landmark in the history of democracy. In addition to its importance in the fate of the fledgling American nation, it also exerted a tremendous influence outside the United States, most memorably in France during the French Revolution. Together with the Constitution and the Bill of Rights, the Declaration of Independence can be counted as one of the three essential founding documents of the United States government.