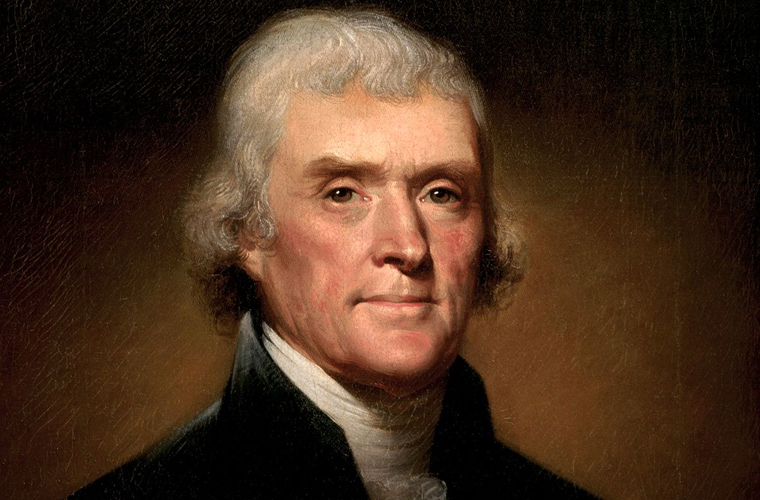 Jefferson was a man of many talents. He was the author of the Declaration of American Independence, a founding father of the United States and the country’s third president.

Thomas Jefferson was born in Shadwell, Virginia, on 13 April 1743 into a wealthy landowning family. He studied law and practiced until the early 1770s. He served as a magistrate and was a member of the Virginia House of Burgesses from 1769 to 1775.

By 1774, he was actively involved in organizing opposition to British rule, and in his pamphlet, ‘A Summary View of the Rights of British America’ Jefferson articulated the colonial position for independence. As a member of the second Continental Congress, he was the principal author of the Declaration of Independence. He returned to Virginia and served as governor from 1779 to 1781.

In 1784, Jefferson went to France where he served first as trade commissioner and then as American ambassador. He was in France for four years and witnessed the beginning of the French Revolution.

In 1790, he became the first secretary of state, a position he held until 1793 when he resigned after a quarrel with the secretary of the treasury, Alexander Hamilton. Out of the diverging views of Jefferson and Hamilton were forming two separate political parties, the Democrat-Republicans, and the Federalists.

In 1796, Jefferson reluctantly stood as the Republican candidate for president, losing by three votes to Federalist John Adams. He served as Adams’ vice president between 1797 and 1801. In 1801, after a bitterly fought election, Jefferson became the third president of the United States, serving for two terms.

In 1803, Jefferson purchased the Louisiana territory from Napoleon for $15 million, almost doubling the size of the United States. He also authorized the Lewis and Clark Expedition (1804-1806), which explored the American west and northwest.

During Jefferson’s second term he attempted to maintain American neutrality in the Napoleonic wars, despite both England and France interfering with American shipping. Jefferson responded by forbidding American ships to sail to any European ports. This was disastrous for the American economy and the legislation was repealed shortly before Jefferson left office in 1809.

Jefferson retired to Monticello, the house he had built in Virginia. The founding of the University of Virginia was his most important achievement in these final years. In 1815, he sold his library to the federal government in Washington, where it became the nucleus of the Library of Congress. Jefferson died on 4 July 1826.