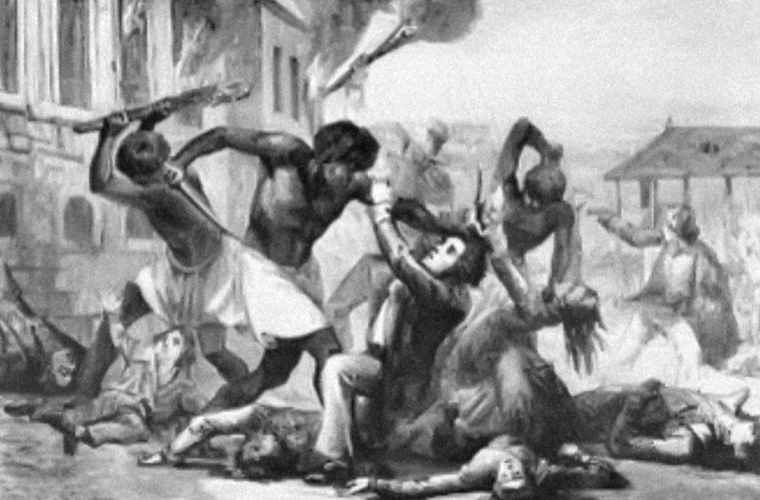 Denmark Vesey, (born c. 1767, probably St. Thomas, Danish West Indies—died July 2, 1822, Charleston, S.C., U.S.), self-educated black who planned the most extensive slave revolt in U.S. history (Charleston, 1822). Sold as a boy in 1781 to a Bermuda slaver captain named Joseph Vesey, young Denmark, who assumed his master’s surname, accompanied him on numerous voyages and in 1783 settled with his owner in Charleston.

In 1800 Denmark was allowed to purchase his freedom with $600 he had won in a street lottery. He was already familiar with the great Haitian slave revolt of the 1790s, and while working as a carpenter he read anti-slavery literature. Dissatisfied with his second-class status as a freedman and determined to help relieve the far more oppressive conditions of bondsmen he knew, Vesey planned and organized an uprising of city and plantation blacks. The plan reportedly called for the rebels to attack guardhouses and arsenals, seize their arms, kill all whites, burn and destroy the city, and free the slaves. As many as 9,000 blacks may have been involved, though some scholars dispute this figure.

Warned by a house servant, white authorities on the eve of the scheduled outbreak made massive military preparations, which forestalled the insurrection. During the ensuing two months, some 130 blacks were arrested. In the trials that followed, 67 were convicted of trying to raise an insurrection; of these, 35, including Vesey, were hanged, and 32 were condemned to exile. In addition, four white men were fined and imprisoned for encouraging the plot.