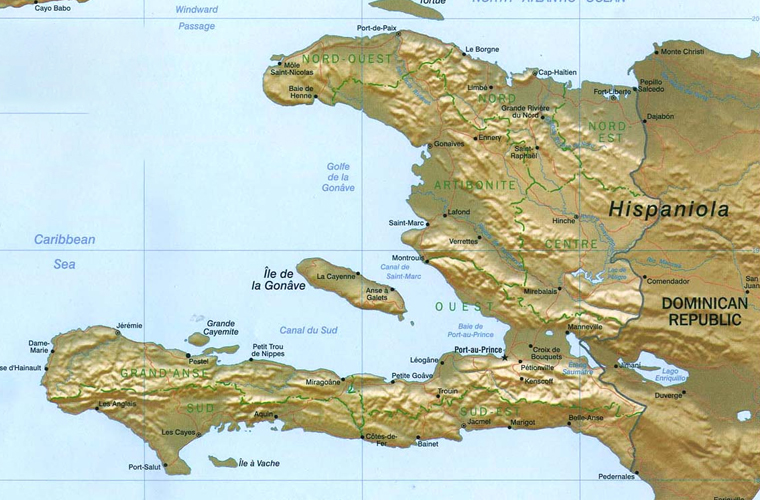 Haiti is an independent nation in the Caribbean that occupies the western part of the island of Hispaniola, with the Dominican Republic to the east. The island was initially claimed by Spain, which later ceded the western third of the island to France. Prior to gaining its independence in 1804, Haiti was the French colony of Saint-Domingue. Under French rule, Saint-Domingue grew to be the wealthiest colony in the French empire and, perhaps, the richest colony in the world. Shortly before the Haitian Revolution, Saint-Domingue produced roughly 40 percent of the sugar and 60 percent of the coffee imported to Europe.

The colonial economy of Saint-Domingue was based almost entirely on the production of plantation crops for export. Enslaved African workers grew sugar in the northern plains around Cap Français, for example, and coffee in the mountainous interior. The slave system in Saint-Domingue was regarded as one of the harshest in the Americas, with high levels of both mortality and violence. To supply the plantation system, French owners imported almost 800,000 Africans to the colony (which, by comparison, is almost double the number of Africans carried to North America).

One of the most notable aspects of Haitian history is that the nation is the only one to have emerged as the result of a successful slave rebellion. From 1791 through 1804, enslaved people and their allies in Saint-Domingue fought a protracted revolution to win their independence from France. This was not the first episode of rebellion or fear of rebellion, as the case of François Makandal shows, but it was the most successful. After a ceremony at Bois Caïman, the rebellion began in August 1791. Within a few weeks, the insurrection grew to include more than one hundred thousand participants who destroyed hundreds of plantations. In 1792, the French Assembly sent troops to put down the rebellion.

The conflict soon took on an international imperial dimension as Great Britain and Spain attempted to win control of the island. Under the leadership of Toussaint Louverture, a former slave, the rebels fought off British and Spanish attacks and even liberated enslaved people on the Spanish side of the island. In 1801, Louverture announced himself as leader of Saint-Domingue but was eventually captured by French imperial forces.

Napoleon’s forces regained control of the colony in 1802 and attempted to restore slavery, which led to a new wave of rebellion. Under the new leadership of Jean-Jacques Dessalines, the rebellion finally defeated French forces in late 1803. On January 1, 1804, Dessalines announced the new nation of Haiti to a world that was largely unprepared to accept its independence.