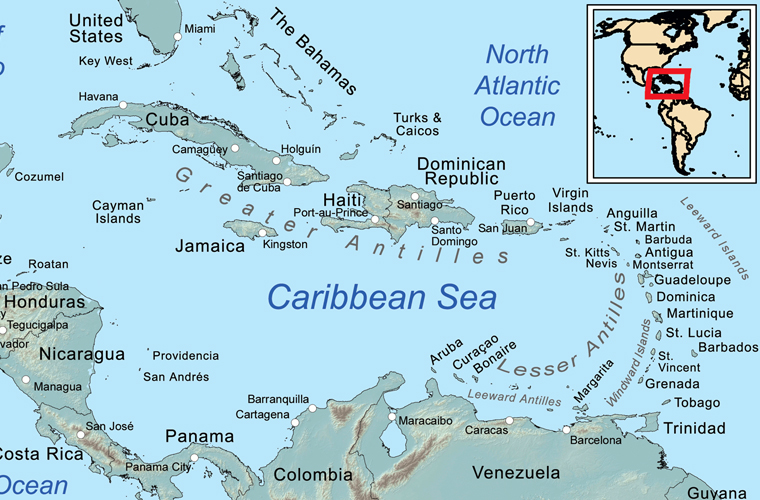 West Indies, Spanish Indias Occidentales, French Indes Occidentales, Dutch West-Indië, crescent-shaped group of islands more than 2,000 miles (3,200 km) long separating the Gulf of Mexico and the Caribbean Sea, to the west and south, from the Atlantic Ocean to the east and north. From the peninsula of Florida on the mainland of the United States, the islands stretch 1,200 miles (1,900 km) southeastward, then 500 miles (800 km) south, then west along the north coast of Venezuela on the South American mainland.

Three major physiographic divisions constitute the West Indies: the Greater Antilles, comprising the islands of Cuba, Jamaica, Hispaniola (Haiti and the Dominican Republic), and Puerto Rico; the Lesser Antilles, including the Virgin Islands, Anguilla, Saint Kitts and Nevis, Antigua and Barbuda, Montserrat, Guadeloupe, Dominica, Martinique, Saint Lucia, Saint Vincent and the Grenadines, Barbados, and Grenada; and the isolated island groups of the North American continental shelf—The Bahamas and the Turks and Caicos Islands—and those of the South American shelf, including Trinidad and Tobago, Aruba, Curaçao, and Bonaire. (Bermuda, although physiographically not a part of the West Indies, has common historical and cultural ties with the other islands and is often included in definitions of the region.)

The shape and alignment of the Greater Antilles are determined by an ancient chain of folded and faulted mountains that in Cretaceous times extended from Central America through the Caribbean. Running west-east, this system is now mostly submerged by the Atlantic and the Caribbean, but remnants of it are visible in the Blue Mountains of Jamaica and in the Sierra de Los Órganos and the Sierra Maestra in Cuba. Duarte Peak, in the Dominican Republic, another component of this range, rises to 10,417 feet (3,175 meters) and is the highest point in the Caribbean. Besides interior mountain peaks, each Greater Antillean island has an encircling coastal plain.

Trending north-south, another mostly submerged chain of mountains forms the double arc of small islands that make up the Lesser Antilles. Stretching from Saint Kitts to Grenada, the mountainous inner arc consists of volcanic cones, some still active. The outer arc—running from Anguilla to Barbados—is made up of low, flat islands whose limestone surfaces overlie older volcanic or crystalline rocks.

The West Indies have a tropical maritime climate. Daily maximum temperatures over most of the region range from the mid-80s F (upper 20s C) from December to April to the upper 80s F (low 30s C) from May to November. Nighttime temperatures are about 10 °F (6 °C) cooler. Most islands experience a wet and a dry season; annual rainfall totals range from 30 to 80 inches (800 to 2,000 mm) but reach more than 200 inches (5,000 mm) on the highest peaks. The region’s moisture-laden trade winds produce heavy rainfall on the windward sides of the higher islands. Tropical cyclones (called hurricanes locally) frequently occur between August and October, and relative humidity is high throughout the year.

The forests that once covered most of the West Indies were cut down in many areas by sugar-plantation owners for firewood to heat their refining vats. This practice resulted in soil impoverishment and erosion. Destruction of the primeval forest has also occurred as a result of slash-and-burn agriculture. Some countries have recognized the importance of the forests, however, and have passed laws to prevent deforestation. Surviving types of forest include mangrove swamps, which thrive along some coasts; semi-deciduous woodland, found in the Leeward Islands (the northern group of the Lesser Antilles; the southern group is called the Windward Islands) and other areas of prolonged drought; tropical rainforest of the wet lowlands; montane forest, occurring in wet highlands; and elfin woodland, which occurs on exposed peaks.

A large number of plant species in the Caribbean are indigenous to the region. At high elevations in the Greater Antilles, species more typical of midlatitude and subarctic flora are found. Land fauna is an impoverished version of the fauna found on the nearby South American mainland. There are many rodents, including the rabbitlike agouti, and numerous species of bats and lizards. Bird species include several parrots, hummingbirds, ibis, and flamingos. The coastal seas are rich in marine life, including turtles, shellfish, caiman, dolphin, red snapper, bonito, and flying fish. Marine life is largely unexploited for food.

The population of the West Indies is ethnically heterogeneous and largely the legacy of an early plantation society based on slave labour. Most of the population is descended from African slaves or from Spanish, French, British, or Dutch colonists or is of mixed ethnicity. The West Indies’ creole languages, evolved from pidgin variants of European languages, have become the common languages of many of the people. The French and English creoles are a blend of these languages with African and West Indian languages. By contrast, the major Spanish-language communities—Cuba, Puerto Rico, and the Dominican Republic—speak pure Spanish. Papiamentu, a Spanish-Dutch (Netherlandic)-Portuguese-English creole, is widely spoken on Aruba, Curaçao, and Bonaire. South Asians constitute a substantial minority in the region, especially in Trinidad and Tobago, where they make up almost four-tenths of the population. Chinese constitute a smaller minority, and people of European (principally Spanish) descent account for some seven-tenths of the population of Puerto Rico. Roman Catholicism is the predominant religion in the Spanish- and French-speaking islands, while Protestantism is the norm in the English-speaking and Dutch territories.

The region’s birth rate historically has been low in comparison with those of other less-developed countries. Emigration, moreover, has played a more significant role in the West Indies than in most other regions, having the effect of dampening population growth even more. Emigration was substantial throughout the 20th century, and more than half of the natural increase in the region was lost owing to emigration. On the other hand, the death rate also declined steadily in the second half of the century, primarily because of reductions in the rate of infant mortality, and remained comparatively low for a less-developed region of the world. About three-fifths of the West Indies’ population is urban, and the rural population has dwindled on many islands because of considerable rural-to-urban migration.

With the exception of Cuba, which has a centrally planned economy, the West Indies can be characterized as a predominantly free-enterprise market region. The economies of the region are marked by dependence on the export of a few commodities, commonly agricultural, and consequently are extremely vulnerable to external economic events. Weak and unstable foreign markets have contributed to the generally unfavorable international-trade accounts of many West Indian countries.

The per capita gross national product (GNP) of the countries in the region ranged in the early 21st century from less than $400 in Haiti (well below the world average) to more than $30,000 in Cuba (comparable to the per capita GNP of many western European countries) and more than $24,000 in the U.S. Virgin Islands. A number of international trade agreements, including the Caribbean Basin Initiative (CBI), have been established to stimulate the West Indian economy, particularly manufacturing. The CBI was begun by the United States in 1984 to provide duty-free access to the U.S. market for a wide range of products.

Agriculture is the traditional basis of the economies of the West Indies, but production and employment in agriculture have been declining. Most countries are not self-sufficient in food production, and cereals, primarily wheat, are the chief food imports. Sugar, bananas, citrus, cocoa, and spices are the principal exports and the major source of foreign exchange for a number of countries. To reduce vulnerability to external markets, many countries have diversified their agricultural production.