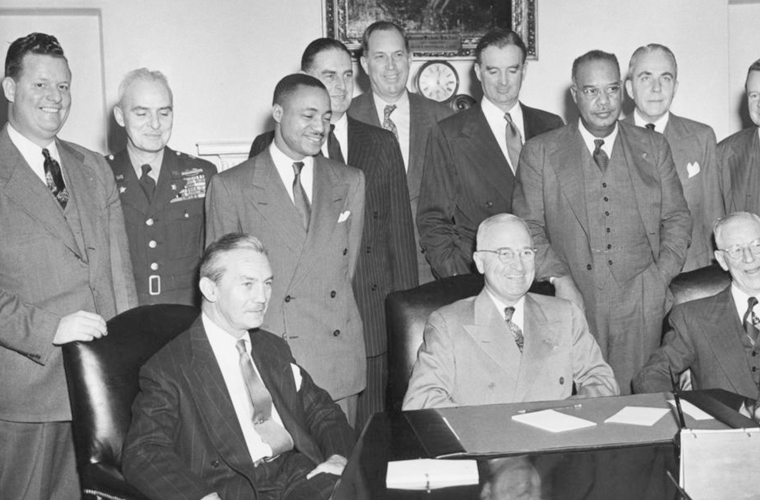 On July 26, 1948, President Harry S. Truman signed Executive Order 9981: Desegregation of the Armed Forces, establishing the Committee on Equality of Treatment and Opportunity in the Armed Services and ordering full integration of all the services. Executive Order 9981 specifically stated that “there shall be equality of treatment and opportunity for all persons in the armed forces without regard to race, color, religion, or national origin.”

The order also implied the creation of an advisory committee charged with examining the practices of the Armed Services and recommending strategies to concretely achieve desegregation. In his book Integration of the Armed Forces, 1940-1965, Morris J. MacGregor, Jr. explained how essential the civil rights movement was to the integration of the Armed Services. The civil rights advocates traded their political support for equality opportunity reforms in a number of elections: their impact was crucial in Roosevelt’s decision to recruit Blacks for general service in the World War II Navy and all branches of the Army, for example, and in Truman’s Executive Order 9981. MacGregor also recalled that resistance to reform was found in the military, notably from so-called military traditionalists whose defense of military tradition often hid bigotry. Traditionalists argued that black servicemen were unreliable in battle, but also that the military’s purpose was not to be a catalyst for social change.

However, as we know, the integration of the military in the 1950s was a success and undermined the traditionalists’ concerns. In particular, individual black servicemen performed well in integrated units, revealing that new social and interactional dynamics could also lead to improved well-being and achievements. Some commanders who, contrary to expectations, began to fight in the Korean War with segregated units, realized that their black servicemen performed better when they began integrating their forces. Accounts of the treatment of the 24th Infantry in the Korean War also revealed the systemic racism faced by the remaining all-black regiment in the conflict obstacles faced in training by African American soldiers at war were also due to segregationist education policies, that is, their unequal educational background in comparison to that of their white peers.

The effective integration of all active military units dates from 1954. The Navy is considered a pioneer in terms of integration, as it created a policy of integration as soon as February 1946. In a number of ways, the successful integration of the armed services put them at the forefront of the nation’s struggle for racial equality: “By demonstrating that large numbers of blacks and whites could work and live together, they destroyed a fundamental argument of the opponents of integration and made further reforms possible if not imperative.”