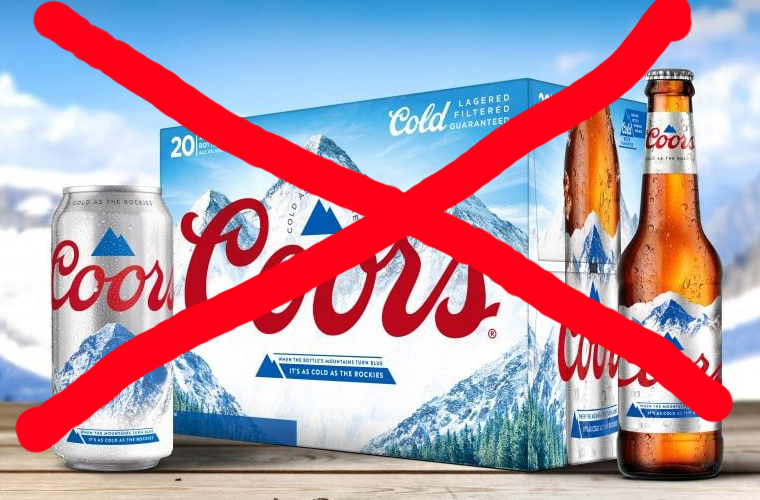 1. COORS SUPPORTS TERRORISM IN NICARAGUA
Each sale of Coors beer helps the contra terrorists in Nicaragua, who have been ambushing and killing civilians, murdering teachers and medical workers, and destroying rural schools and medical centers. The contras, a band of mercenaries established by the CIA, are attempting to overthrow the elected government of Nicaragua. Joseph Coors has contributed to and helped to raise millions of dollars for the contras. (Washington Post, May 3, 1985). The Heritage Foundation, funded and established by Coors, provided a report in 1984 to the Reagan Administration on how to destabilize Nicaragua.

2. COORS IS ANTI-LABOR
Coors has a long history of violating federal labor laws and union-busting – breaking 19 unions in the last 20 years. Coors has blocked the efforts of federal safety inspectors to investigate workplace hazards, which have led to the death of Coors employees (San Francisco Examiner, July 5, 1984).

3. COORS IS RACIST, ANTI-WOMEN’S RIGHTS, AND ANTI-GAY
William E. Coors fought against the passage of the U.S. Civil Rights Act, and in 1984 told an audience of black businessmen that blacks don’t succeed because they “lack intellectual capacity”. (Rocky Mountain News, February 24, 1984). The Coors Company, cited for unlawful employment discrimination in 1970, settled out of court IN 1977 and paid thousands of dollars in back pay, and rehired minority and female workers. Joseph Coors supported the campaign against the Equal Rights Amendment and is a major contributor to the Moral Majority, which has called for the imprisonment of gay persons diagnosed as having AIDS.

4. COORS SUPPORTS NAZI SYMPATHIZERS
When Joseph Coors established the Heritage Foundation in 1974, he chose Roger Pearson, an outspoken antisemite and pro-nazi, as co-editor of the Heritage Foundation publication Policy Review. Pearson is the author of a book on Aryan supremacy called “Race and Civilization”, and has been the editor or co-editor of several racist and neo-nazi magazines. (National Guardian, May 1, 1985). The Heritage Foundation is a right-wing think tank that seeks to abolish civil rights laws, minimum wage laws, affirmative action, rights for the handicapped, and arms control.

5. COORS POLLUTES
In contrast to the advertised association of Coors beer with “pure mountain spring water”, Coors is one of the largest dumpers of hazardous waste in Colorado. (National Catholic Reporter, March 25, 1983).

THE NATIONWIDE COORS BOYCOTT has been extremely effective. Begun in 1977 by brewery workers at the Coors plant in Colorado, the boycott has been endorsed by the AFL-CIO, the NEA (National Education Association), and NOW (National Organization for Women). As a result, Coors has steadily lost sales every year since 1977. Coors is now looking for sales in eastern markets (such as Boston) but here too the boycott has affected sales. At the University of Massachusetts at Amherst and at Brandeis University, for example, sales of Coors beer were recently halted.

(This leaflet is published by the Pledge of Resistance, whose objective is to stop U.S. intervention in Central America – both by the U.S. government and by private sources, such as Coors.)

Coors vs. the Earth
“Waste the High Country”

Coors and Human Rights Fact Sheet
In 1966, Joe Coors was installed as a regent of the University of Colorado. He became known for his advocacy of repressing campus dissent. Coors also sought to abolish Chicano and Black studies programs at the University, and to curtail the admissions of low-income students, because he believed such students would lower academic standards.

The Investments and Involvements

The Solution
In their effort to get widespread media attention by supporting national events and placing their name on large buildings on public university property, we must say NO TO COORS! Our university is not the place for a private self-interest such as Coors to seek publicity and to further their insane social and political practices. Dave Sickler, the coordinator of the 10-year AFL-CIO Coors boycott, said “If you can get two cockroaches to race, Coors will show up with t-shirts and sponsor it.”

A word about that “10-year AFL-CIO Coors boycott:” At that writing, the Coors boycott was about 10 years old, but the AFL-CIO had not been in on it for 10 years. What happened is that the boycott was started by a coalition of human rights and environmental groups and the AFL-CIO joined the coalition.

Unfortunately, the AFL-CIO sold out the coalition as soon as they got what they wanted. You may have heard press reports that the Coors boycott had ended — these reports were issued unilaterally by the AFL-CIO. Groups working for human rights and for the environment continue the boycott, and some labor groups continue the boycott as well.

This final piece is the most recent thing I’ve seen written about Coors.

While the past involvement of the Coors family in conservative causes is well-established, most people are unaware that the family’s rightist goals are still in place and that their political influence remains strong. Although the survival and growth of the corporation have required some financial concessions and a shift in public image, the Coors family empire still represents a threat to peace, social justice, pluralism, and democracy.

Coors family funding continues to flow toward rightist groups, and the family’s political involvement plays a crucial role in the establishment and maintenance of key organizations defining the political dialogue for both the New Right and the Religious Right. Ironically, the family derives the bulk of its wealth from working-class and middle-class people who purchase Coors beer products. The Coors family, through its political operations, then uses its share of the profits from beer sales to perpetuate and encourage regressive governmental and social policies serving only the narrow interests of a handful of the very wealthy in this country. That they are able to cloud this reality is due to the Coors Corporation’s high-visibility advertising campaign.

“The pattern of Coors family funding and activism stands in stark contrast to the mainstream image projected by the Coors Brewing Company, whose advertising and funding reach out to the African-American, women’s, and gay communities,” charges Dr. Jean Hardisty of Political Research Associates in Cambridge, Mass. “In fact, Coors family funding underwrites a broad and effective attack on the democratic rights of people of color, gay men and lesbians, and women.”

Pillars of New Right
The Coors family is highly influential in shaping the activities of three organizational pillars of the New Right — the Heritage Foundation, the Free Congress Foundation (FCF), and the Council for National Policy (CNP) — which comprise an influential force in Washington, DC. Involvement with these key groups provides the Coors family with a conservative political base. From this base, the family is connected to prominent activists in other New Right organizations, groups on the Religious Right, and to allies in governmental agencies and in Congress. For example, FCF is the major New Right political power base for White House Chief of Staff John Sununu, who engineered the David Souter Supreme Court nomination.

In reality, the Coors family is a powerful, wealthy, highly organized force for social change. The change they support with their time and money is a return to Social Darwinian political and economic morality framed by the unrestricted demands of the market and capital. They see racism ending with the Civil War and leaving no enduring legacy in the 20th century. In international affairs, they expect Third World countries to embrace U.S. capital investment without restrictions. They give money to groups that support the apartheid government in South Africa, the violent RENAMO army in Mozambique, and the Pretoria-supported UNITA forces in Angola.

The Coors family also funds a right-wing sector of Christian fundamentalism, which seeks to replace democratic pluralism with so-called “traditional family values” — that is, an authoritarian, gender-based social order. They support groups that say homosexuals are an abomination and AIDS is God’s judgment on sinners. They have supported Reverend Sun Myung Moon and Christian Reconstructionists, both of whom have called for the abolition of U.S. democracy and the establishment of a theocratic state.

What is surprising is the extent of Coors’s family involvement with groups that belong properly to neither the New Right nor the Religious Right, but to the fringes of the ultraright. Even more disheartening is the extent to which mainstream political organizations evince a willingness to work with these denizens of the fringe. The Coors far-right links include the following:

Power Brokers
There are other powerful New Right funders, but it is the Coors family who times and again appear in leadership roles in New Right institutions, offering a guiding hand along with their signed checks. The family is seen, by critics and compatriots alike, as being in the front rank of conservative U.S. power brokers.

Some observers contend that the Coors empire has moderated politically because the Coors Corporation now financially supports some women’s, civil rights, and gay and lesbian groups. These donations and advertising dollars, however, merely represent a pragmatic, investment-oriented response to the consumer boycott of Coors products — not a rejection of the bedrock rightist and anti-democratic beliefs held by the Coors family.

With the thawing of the Cold War, the views of the New Right’s major funders will to a large degree shape the nature of conservative activism in the coming decades. Studying the past action and ideas of the Coors family provides an imperfect yet useful glimpse into the future of the U.S. political right.