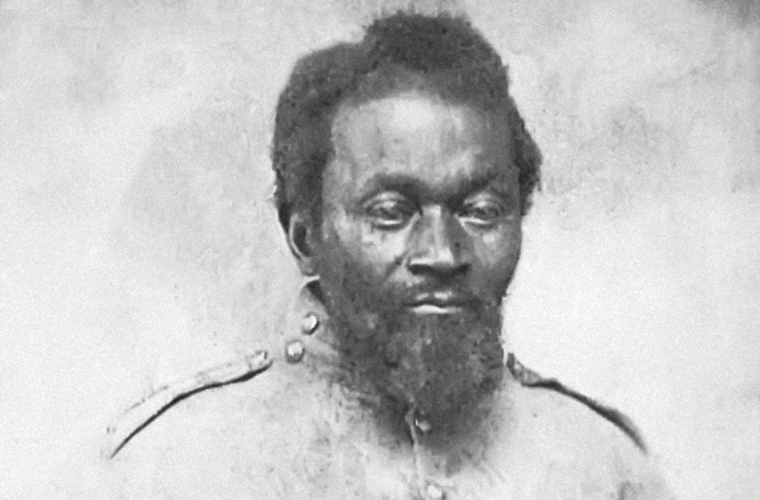 The first man to shed blood during the Civil war was escaped slave Nicholas Biddle of Pottsville, PA. Very little is known of Biddle’s life. He was born to slave parents in Delaware around 1796. At some point, he escaped from slavery and settled in Pennsylvania. It was common practice for escaped slaves to change their names to avoid getting caught, and two stories emerged about Biddle.

According to one historian’s account, Biddle escaped to Philadelphia and got a job as a servant for Nicholas Biddle, a wealthy financier, and president of the Second Bank of the United States. In this story, the former slave and the financier traveled to Pottsville for a dinner meeting of entrepreneurs and industrialists at nearby Mount Carbon to celebrate the first successful operation of an anthracite-fueled blast furnace in America. The servant remained in Pottsville to live. Another account is that Biddle relocated from Delaware directly to Pottsville and became a servant at the hotel where the aforementioned celebratory dinner was held, at which he met the famous Biddle.

In any event, we know that he adopted the name of the prominent Philadelphian, and by 1840 Nicholas Biddle was residing in Pottsville. He worked odd jobs to earn a living, including street vending, selling oysters in the winter and ice cream in the summer. The 1860 U.S. census lists his occupation as “porter.”

Biddle befriended members of a local militia company, the Washington Artillerists, and attended their drills and excursions for the next 20 years. The company members were fond of Biddle and treated him as one of their own, and although African Americans were not permitted to serve in the militia, they gave him a uniform to wear.

At the outbreak of the Civil War and the fall of Fort Sumter on April 15, 1861, President Lincoln issued a call for 75,000 volunteers to serve for three months to suppress the insurrection in the South. Unlike other antebellum militia units, the Washington Artillery had maintained a state of readiness and was among the first companies to respond to Lincoln’s call to arms.

Two days later, the Washington Artillerists departed Pottsville by train to enter the war, along with 65-year-old Nicholas Biddle, who served as an aide to the company’s commanding officer, Captain James Wren.

On April 18, five companies, numbering some 475 men, were sworn in at Harrisburg and mustered into the service of the United States. That is, all except for Nicholas Biddle, who as an African American was prohibited from serving in the U.S. Army.

The soldiers left on an emergency order to defend Washington, DC against a rumored Confederate attack. But in 1861, there was no continuous passenger rail service through Baltimore, and when the soldiers detained in the largest city in the slave state of Maryland, they encountered a hostile mob of pro-Southern sympathizers.

As the companies marched to meet their trains, members of the mob taunted the soldiers and hurled bricks and stones. Biddle, a black man in uniform, was an easy target. Someone threw a brick at his head that knocked him to the ground, making him the first casualty caused by hostile action in the Civil War.

The wound was grave enough that it exposed his bone. It was reportedly the first and most serious injury suffered that day, and he bore the scar the rest of his life.

An anxious President Lincoln learned of the arrival of the five Pennsylvania companies and of their treacherous passage through the mob at Baltimore. The morning after they arrived in Washington, Lincoln personally thanked each member of the five companies and singled out the wounded for special recognition.

After his military service, Biddle returned to relative obscurity in Pottsville, where he eked out a living performing odd jobs. In the summer of 1864, he appeared at the Great Central Fair in Philadelphia, where photographs of him in a Washington Artillerists uniform, captioned “the first man wounded in the Great American Rebellion,” were sold to raise funds for the relief of Union soldiers. In the end, however, Biddle was forced to solicit alms to make ends meet. He died destitute in 1876 without even enough money to cover his burial expenses. Surviving members of the Washington Artillerists and the National Light Infantry each donated a dollar to purchase a simple headstone for him, and they had it inscribed: “In Memory of Nicholas Biddle, Died Aug.2, 1876, Aged 80 years. His was the Proud Distinction of Shedding the First Blood in the Late War for the Union, Being Wounded while marching through Baltimore with the First Volunteers from Schuylkill County, 18 April 1861. Erected by his Friends in Pottsville.”

Throughout the remainder of his life, Biddle retained unpleasant memories of his perilous journey with the Washington Artillerists through Baltimore. Although it garnered him the “proud distinction of shedding the first blood,” he was often heard to remark “that he would go through the infernal regions with the artillery, but would never again go through Baltimore.”