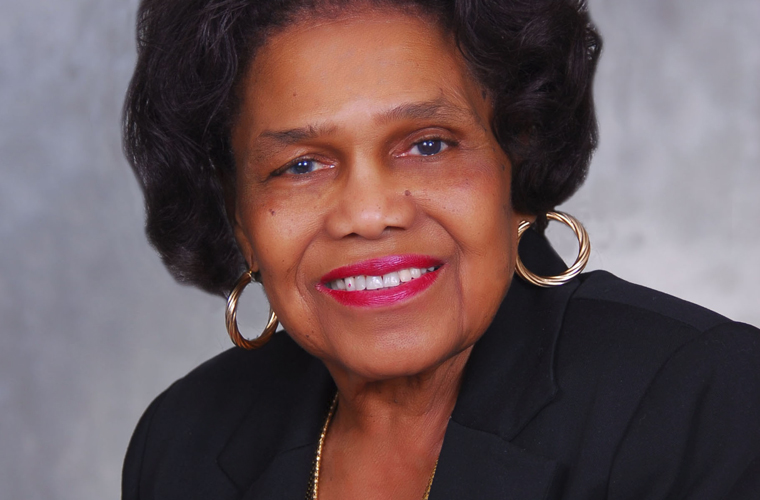 In 1948, nine years before the “Little Rock Nine” integrated Central High School in Little Rock, Arkansas, Edith Irby Jones became the first black student to attend racially mixed classes in the South, and the first black student to attend the University of Arkansas School of Medicine. Her enrollment in a previously segregated southern medical school made news headlines across the nation.

Although Edith Irby had been accepted to attend classes at the University of Arkansas School of Medicine, she was not allowed to use the same dining, lodging, or bathroom facilities as other students. The daughter of a sharecropper and a domestic worker, Edith Irby was used to hardship. When she was five, she could not walk for eighteen months due to illness. When she was eight, her father died in a riding accident. Later, she lost a sister and other members of her family to typhoid.

Like many of her contemporaries, Edith Irby Jones was denied equal access to educational opportunities from childhood. But her abilities and talents were nurtured and supported by her family and the larger African-American community, leading her to believe that “you can do anything you want to do.”

A high school teacher helped her get a scholarship to the historically black Knoxville College in Tennessee. After high school, African Americans in Little Rock and across Arkansas contributed to her medical school fund with dimes and quarters. High school alumni helped pay for her medical school tuition, while a similar effort sponsored by the black newspaper, the Arkansas State-Press, paid for her living expenses. Even the medical school’s custodial staff supported her—placing a vase of fresh flowers on her table in the adjoining—and segregated—staff dining room every day. Jones, in turn, worked to help others, spending many nights traveling the state to help enlist members into the National Association for the Advancement of Colored People (NAACP). Jones recalled later that, while some white women in her class became good friends, her strongest support in medical school came from her husband, Professor James B. Jones, whom she met and married while she was a second-year medical student.

After receiving her M.D. in 1952, Jones practiced in her hometown of Hot Springs, Arkansas, for six years. But she and her husband moved to Houston when the racial climate became sharply polarized. By then they had had two children, but Dr. Jones was determined to complete a residency in internal medicine at Baylor College of Medicine Affiliated Hospitals. The school welcomed her, but the hospital to which she was assigned segregated her and limited her patient rosters. She completed the last months of her residency at Freedman’s Hospital in Washington, D.C. In 1962, she set up a private practice in inner-city Houston, which continues to thrive today.

Throughout her career, Dr. Jones has passionately and steadfastly committed herself to social betterment, the poor, and her community. In 1985 she became president of the National Medical Association, established for black doctors who were not allowed to join the American Medical Association. She has also been active in the American Medical Women’s Association and Planned Parenthood, as well as other groups. In 1991 she sponsored the establishment of a medical clinic in Haiti.

Edith Jones has received numerous awards and citations, most notably from the city of Houston and the State of Texas. In 1986 Houston honored her with Edith Irby Jones Day, in 1988 she was named American Society of Medicine Internist of the Year, and in 1998 the ambulatory center at the former Southeast Memorial Hospital was named in her honor.

In 1985, during her inaugural address as president of the National Medical Association, Jones stated: “We give little when we give only our material possessions. It is when we give of ourselves that we truly give—the long challenging hours with patients who can pay and those who cannot pay, the agony of sharing the hurts of families with the death of loved ones, the observations of dehumanizing effects of seeing the jobless, the crushed ambitions, and the sharing when all we have to hold on to is the ‘being within’ to inspire the young to take up our role. We have the comfort of knowing that our work is not to make a living but to make a life, not just for ourselves or a select few, but life with its fullness for all, and especially providing the access to health care, which is our special charge.”