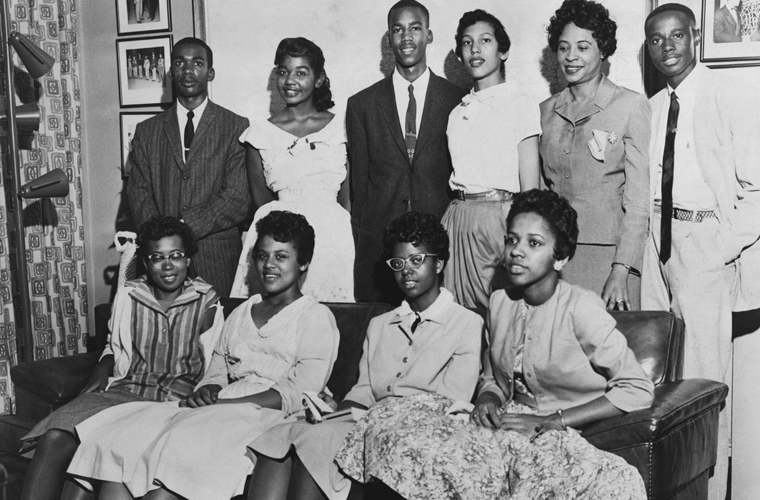 The Little Rock Nine were a group of nine black students who enrolled at formerly all-white Central High School in Little Rock, Arkansas, in September 1957. Their attendance at the school was a test of Brown v. Board of Education, a landmark 1954 Supreme Court ruling that declared segregation in public schools unconstitutional. On September 4, 1957, the first day of classes at Central High, Governor Orval Faubus called in the Arkansas National Guard to block the black students’ entry into the high school. Later that month, President Dwight D. Eisenhower sent in federal troops to escort the Little Rock Nine into the school.

In its Brown v. Board of Education of Topeka decision, issued May 17, 1954, the U.S. Supreme Court ruled that segregation of America’s public schools was unconstitutional.

Until the court’s decision, many states across the nation had mandatory segregation laws, requiring African-American and white children to attend separate schools. Resistance to the ruling was so widespread that the court issued a second decision in 1955, known as Brown II, ordering school districts to integrate “with all deliberate speed.”

In response to the Brown decisions and pressure from the local chapter of the National Association for the Advancement of Colored People (NAACP), the Little Rock, Arkansas, the school board adopted a plan for gradual integration of its schools.

The first institutions to integrate would be the high schools, beginning in September 1957. Among these was Little Rock Central High School, which opened in 1927 and was originally called Little Rock Senior High School.

Two pro-segregation groups formed to oppose the plan: the Capital Citizens Council and the Mother’s League of Central High School.

Daisy Bates and others from the Arkansas NAACP carefully vetted the group of students and determined they all possessed the strength and determination to face the resistance they would encounter. In the weeks prior to the start of the new school year, the students participated in intensive counseling sessions guiding them on what to expect once classes began and how to respond to anticipated hostile situations.

The group soon became famous as the Little Rock Nine.

Orval Faubus
On September 2, 1957, Governor Orval Faubus announced that he would call in the Arkansas National Guard to prevent the African-American students’ entry to Central High, claiming this action was for the students’ own protection. In a televised address, Faubus insisted that violence and bloodshed might break out if black students were allowed to enter the school.

The Mother’s League held a sunrise service at the school on September 3 as a protest against integration. But that afternoon, federal judge Richard Davies issued a ruling that desegregation would continue as planned the next day.

Elizabeth Eckford
The Little Rock Nine arrived for the first day of school at Central High on September 4, 1957. Eight arrived together, driven by Bates. Elizabeth Eckford’s family, however, did not have a telephone, and Bates could not reach her to let her know of the carpool plans. Therefore, Eckford arrived alone.

The Arkansas National Guard, under the orders of Governor Faubus, prevented any of the Little Rock Nine from entering the doors of Central High. One of the most enduring images from this day is a photograph of Eckford, alone with a notebook in her hand, stoically approaching the school as a crowd of hostile and screaming white students and adults surround her. Eckford later recalled that one of the women spat on her. The image was printed and broadcast widely, bringing the Little Rock controversy to national and international attention.

Judge Davies ordered the Guard removed on September 20, and the Little Rock Police Department took over to maintain order. The police escorted the nine African-American students into the school on September 23, through an angry mob of some 1,000 white protesters gathered outside. Amidst ensuing rioting, the police removed the nine students.

The following day, President Eisenhower sent in 1,200 members of the U.S. Army’s 101st Airborne Division from Fort Campbell, Kentucky, and placed them in charge of the 10,000 National Guardsmen on duty. Escorted by the troops, the Little Rock Nine attended their first full day of classes on September 25.

Numerous legal challenges to integration continued throughout the year, and Faubus repeatedly expressed his wish that the Little Rock Nine be removed from Central High.

Although several of the black students had positive experiences on their first day of school, according to a September 25, 1957, report in The New York Times, they experienced routine harassment and even violence throughout the rest of the year.

Melba Patillo, for instance, was kicked, beaten, and had acid thrown in her face. At one point white students burned an African-American effigy in a vacant lot across from the school.

Gloria Ray has pushed down a flight of stairs, and the Little Rock Nine were barred from participating in extracurricular activities.

Minnijean Brown was expelled from Central High School in February 1958 for retaliating against the attacks. And it was not only the students who faced harassment: Gloria Ray’s mother was fired from her job with the State of Arkansas when she refused to remove her daughter from the school. The 101st Airborne and the National Guard remained at Central High School for the duration of the year.
Ernest Green

On May 25, 1958, Ernest Green, the only senior among the Little Rock Nine, became the first African-American graduate of Central High.

In September 1958, one year after Central High was integrated, Governor Faubus closed all of Little Rock’s high schools for the entire year, pending a public vote, to prevent African-American attendance. Little Rock citizens voted 19,470 to 7,561 against integration and the schools remained closed.

Other than Green, the rest of the Little Rock Nine completed their high school careers via correspondence or at other high schools across the country. Eckford joined the Army and later earned her General Education Equivalency diploma. Little Rock’s high schools reopened in August 1959.

Did you know? Civil rights leader Martin Luther King Jr. attended graduation ceremonies at Central High School in May 1958 to see Ernest Green, the only senior among the Little Rock Nine, receive his diploma.

Little Rock Nine Aftermath
Several of the Little Rock Nine went on to distinguished careers.
Green served as assistant secretary of the federal Department of Labor under President Jimmy Carter. Brown worked as deputy assistant secretary for workforce diversity in the Department of the Interior under President Bill Clinton. Patillo worked as a reporter for NBC.

The group has been widely recognized for its significant role in the civil rights movement. In 1999, President Clinton awarded each member of the group the Congressional Gold Medal. The nine also all received personal invitations to attend the inauguration of President Barack Obama in 2009.

Jefferson Thomas became the first of the Little Rock Nine to die when he succumbed to pancreatic cancer at the age of 67 on September 5, 2010. After graduating from Central High, Thomas served in the Army in Vietnam, earned a business degree, and worked as an accountant for private companies and the Pentagon.