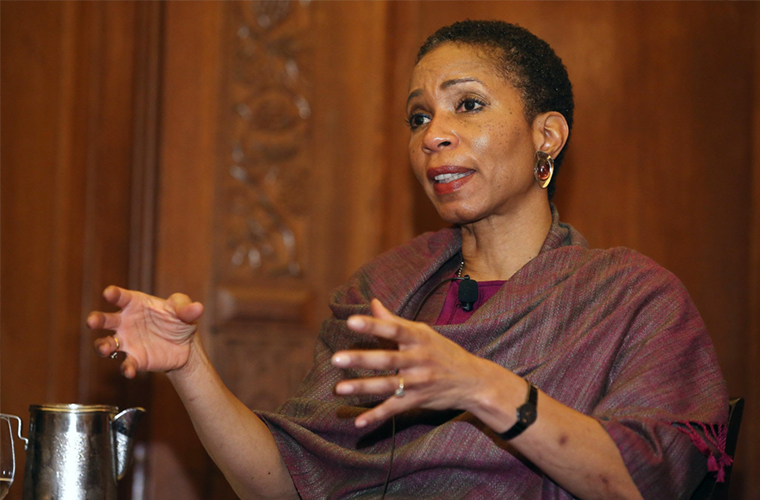 “Dr. Gayle exemplifies the best in public health leadership,” said Dr. David Satcher, director of the Centers for Disease Control and Prevention in June 1999, “…she has made significant contributions to the international and domestic study, control, and prevention of HIV and AIDS and other infectious diseases.” With these words, Helene D. Gayle was sworn in as an assistant surgeon general and rear admiral in the Commissioned Corps of the U.S. Public Health Service.

Helene Gayle was born in 1955 to small-business owner Jacob Gayle and his wife Marietta, a social worker, and was raised in Buffalo, New York. She attended Barnard College in New York City, from which she graduated with honors. In 1981, she earned both an M.D. from the University of Pennsylvania School of Medicine and an M.P.H. from the Johns Hopkins University School of Hygiene and Public Health. She pursued an internship and residency in pediatrics at the Children’s Hospital National Medical Center in Washington, D.C.

In 1984, Dr. Gayle began her career at the Centers for Disease Control (CDC) as an epidemic intelligence service officer in the Epidemiology Branch where, besides training public health officers, she conducted research on malnutrition, low birth weight, and poor growth in children in the United States and Africa. She entered the preventive medicine residency program at the CDC in 1985, and as a medical epidemiologist in the CDC’s International Health Program Office, she developed and evaluated programs to control diarrheal diseases among children in African countries. By 1987, she was a medical epidemiologist in the CDC’s AIDS Program. She has also served as the AIDS coordinator and chief of the HIV/AIDS Division for the U.S. Agency for International Development (USAID), and was a health consultant to the World Health Organization and the United Nations AIDS Program.

Since 1987, when Dr. Gayle completed her residency training in preventive medicine at the CDC, she has devoted her career to providing scientific, management, and policy leadership in research, control, and prevention related to HIV/AIDS, as well as other sexually transmitted diseases and tuberculosis.

From 1995 to 2001 she served as director of the CDC’s National Center for HIV, STD, and TB Prevention (NCHSTP), and has collaborated with public and private partners at the community, state, national, and international levels to implement well-integrated multidisciplinary programs that prevent disease and save lives. During her tenure, the NCHSTP expanded community-based HIV prevention activities, especially in minority and underserved communities. She also helped to launch a new global HIV/AIDS initiative and efforts to eliminate syphilis and tuberculosis.

In 2001, Dr. Gayle was named the director of the Bill and Melinda Gates Foundation’s HIV/AIDS and Tuberculosis program, where she is responsible for research, policy, public awareness, and program issues on HIV/AIDS, other sexually transmitted diseases, and tuberculosis in poorer countries.

Dr. Gayle has been honored with numerous awards, including Columbia University’s Barnard College Women of Achievement Award in 2001 and the Woman of the Year Award in 1999 from the 100 Black Men of America group. She has written and edited numerous book chapters and journal articles, many focusing on HIV/AIDS infection among women, children, and adolescents in developing countries. She is a member of many professional organizations, including the Council on Foreign Relations and the American Association for the Advancement of Science.