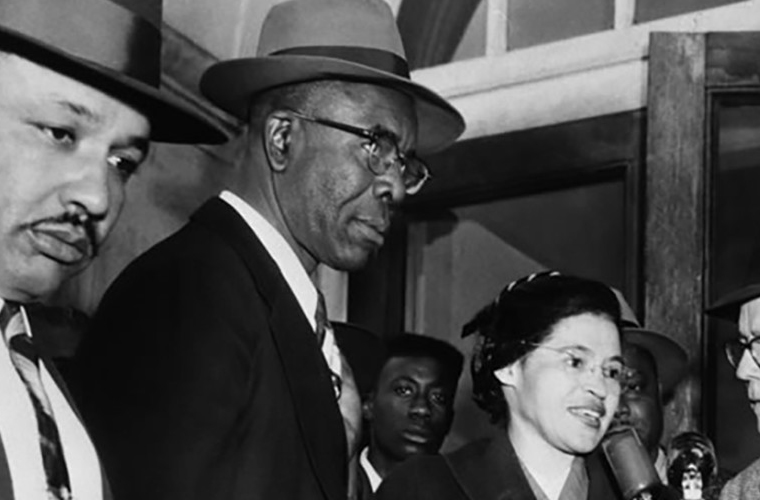 E.D. Nixon was a Pullman porter and civil rights leader who worked with Rosa Parks and Dr. Martin Luther King Jr. to initiate the Montgomery Bus Boycott. Born on July 12, 1899, in Lowndes County, Alabama, E.D. Nixon went on to work as a Pullman porter, later becoming a community activist in Montgomery with leadership positions in the NAACP and the Voters League. He was key in bailing Rosa Parks out of jail and positioning her case to spark the Montgomery Bus Boycott, recruiting Dr. Martin Luther King Jr. as well. Nixon died on February 25, 1987.
Edgar Daniel Nixon was born on July 12, 1899, in Lowndes County, Alabama, to Sue Ann Chappell and Wesley M. Nixon. His mother died when Nixon was a boy, and he later lived in Montgomery during his teens. Nixon grew up to be a statuesque young man who found employment working as a Pullman porter toward the beginning of the 1920s.Nixon became involved with the Brotherhood of Sleeping Car Porters, an African-American union founded and presided over by A. Philip Randolph. The BSCP president inspired Nixon to action, and he went on to become the leader of the BSCP Alabama branch and a thoughtful, empowering community activist who largely influenced the civil rights movement.
During the early 1940s, E.D. Nixon wrote a letter to Eleanor Roosevelt calling for an establishment of a USO Club for African-American servicemen. She took action on his request, and the two later coincidentally met when she was riding on a train and he was working as a porter, beginning a friendship.Nixon also helped to organize the Montgomery Voters League, becoming its president and leading a march of more than 700 citizens to the Montgomery County Municipal Court House, calling for an end to unfair practices that blocked African-American voting rights. Around the same time, he was elected to head the Montgomery chapter of the National Association for the Advancement of Colored People, later becoming president of the organization’s entire Alabama branch.

Nixon was a shrewd strategist and promised one year that he would mobilize African-American votes to support a police commissioner candidate in exchange for black officers being hired on the force. Nixon also ran for county office in 1954, the same year he was chosen as the Alabama Journal‘s Man of the Year; he lost the election only by a slim margin.

Nixon was looking for a way to formally challenge the city’s segregationist laws. On December 1, 1955, when fellow NAACP member Rosa Parks refused once again to surrender her seat on a bus to a white passenger, she was arrested. Nixon played a key role in providing bail for Parks and he also enlisted the aid of white attorney Clifford Durr and his spouse Virginia.Nixon believed that the event could spur a boycott of the area’s bus lines and be processed via legal channels, convincing Parks of the power of her case. He also enlisted the aid of a new, young preacher at the Dexter Avenue Baptist Church, Dr. Martin Luther King Jr., to lead the boycott. As a result, Nixon, King, and minister Ralph D. Abernathy helped to form the Montgomery Improvement Association, with Nixon serving as treasurer.

The Montgomery Bus Boycott lasted for more than 380 days, with the African-American community enduring a host of travails that included harassment and violent attacks. Nixon’s home was firebombed two days after King’s, and he was indicted for violating a state anti-boycott statute. Yet the boycott persevered and the city was eventually forced to lift its bus segregation laws.

Nixon split from the MIA in 1957, protesting class- and education-based prejudices in leadership and the condescending treatment he felt he’d received. He continued his community work and became a public-housing recreation director after his retirement as a porter.Nixon eventually received an honorary doctorate from Alabama State University, in addition to other accolades. He was married twice. His first wife, Alease, gave birth to their son, E.D. Nixon Jr., in 1928 and passed in 1934. Nixon and his second wife, Arlette, worked together in the civil rights movement.