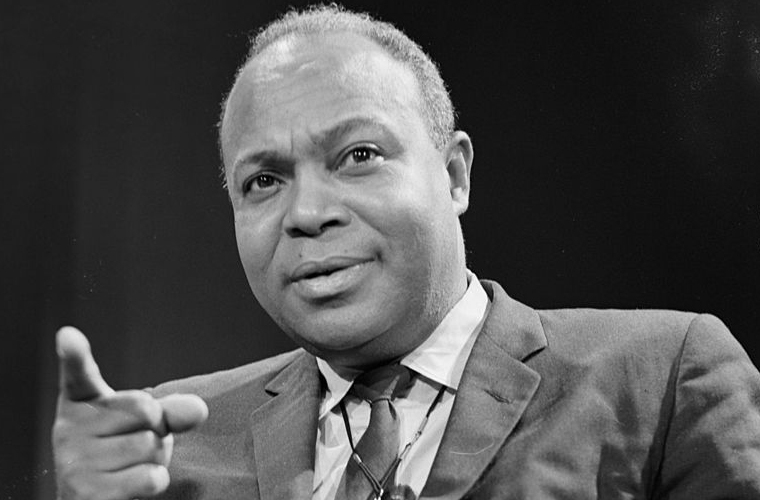 Civil rights leader James Farmer headed the Congress of Racial Equality (CORE) and organized the historic Freedom Rides of 1961. Born on January 12, 1920, in Marshall, Texas, James Farmer was a star college debater before going on to lead the Congress for Racial Equality, which would become one of the most prominent organizations of the Civil Rights era. A devotee of Gandhi’s nonviolent strategies, Farmer also organized the historic Freedom Rides, which lead to interstate travel desegregation. He died on July 9, 1999.

Freedom Ride leader James Leonard Farmer Jr. was born on January 12, 1920, in Marshall, Texas. His mother was a teacher and his father a minister who was also the first African-American citizen to earn a doctorate in the state. Surrounded by literature and learning, the young Farmer was an excellent student, skipping grades and becoming a freshman at Wiley College in 1934 at the age of 14. While there he continued to excel as part of the debate team, and his eloquence and storytelling abilities would later be heard nationally as an adult.

(Farmer’s life as a star college orator was portrayed in the Denzel Washington-directed film The Great Debaters, where Farmer Jr. was played by Denzel Whitaker and his father by Forest Whitaker, with no real-life relationship between the two actors.)

Previously contemplating a career in medicine, Farmer then thought he would follow in his dad’s footsteps and take up ministerial work, earning his divinity degree from Howard University in 1941. While there he learned about the life and teachings of Mahatma Gandhi. Farmer studied much of Gandhi’s philosophies and would apply the leader’s ideas of nonviolent civil resistance to U.S. racial desegregation.

Opting not to forge a career in religion either, Farmer was a conscientious objector during World War II and worked with the Fellowship of Reconciliation by the early 1940s. Living in Chicago, Illinois, he was also a TV screenwriter and magazine scribe.

Farmer was in a first marriage with Winnie Christie from 1945 to ’46, and in 1949 married Lula A. Petersen, with whom he had two children.

Committed to racial harmony, Farmer, his friend George Houser and a multi-racial group of colleagues decided that they would desegregate a Chicago eatery via a 1942 sit-in. They thus formed the Committee of Racial Equality, with the name later becoming the Congress of Racial Equality. With Farmer elected national chairman, CORE developed a mostly white North-based membership with various chapters, yet would eventually find itself becoming deeply involved in the South.

Farmer had some periods away from the organization, but with the Civil Rights Movement making headlines with historical rulings and actions, he was elected to become national director of CORE in February 1961. Farmer thus became one of the most prominent African-American leaders of the era, joining the ranks of figures like Dr. Martin Luther King Jr. and Roy Wilkins.

Farmer worked on launching the Freedom Rides with the intention of challenging segregation on intestate bus travel, which had technically been declared illegal in 1946 and which CORE had taken action upon previously. The Freedom Riders consisted of both women and men, black and white who traveled on bus routes through Southern states.

The first ride was launched in May of 1961, with the bus firebombed upon reaching Alabama after travel through several states. Other riders were mobilized, yet the brutality was horrifying, with one rider having been beaten so badly he was left paralyzed for life and protesters jailed en masse in Jackson, Mississippi. Audiences around the world were able to see via television violent racism at work, and in September of 1961 the Interstate Commerce Commission—at the behest of Attorney General Robert Kennedy—declared segregation impermissible in Southern public travel facilities and modes of transport.

CORE, also at the helm of hiring-based protests in the North, continued its prominent work in the South, with Farmer being targeted for his leadership and jailed and three CORE-affiliated workers murdered in Mississippi in 1964.

Farmer eventually resigned from leading CORE in the mid-1960s. His book Freedom—When? was published in 1966 and, after a stint teaching at Lincoln University, he ran unsuccessfully for Congress on the Republican ticket against Democrat Shirley Chisolm in 1968. He later worked in the administration of President Richard Nixon, though he left in frustration.

Receiving several honors for his work over time, Farmer was able to tell his story to new generations, releasing his acclaimed autobiography Lay Bare the Heart in 1985. More than a decade later he received the Presidential Medal of Freedom from Bill Clinton. And in 2011, PBS’ American Experience released a documentary that focused on CORE’s work entitled Freedom Riders.

Farmer had been suffering greatly from diabetes during his later years. He died on July 9, 1999, in Fredericksburg, Virginia, at the age of 79.