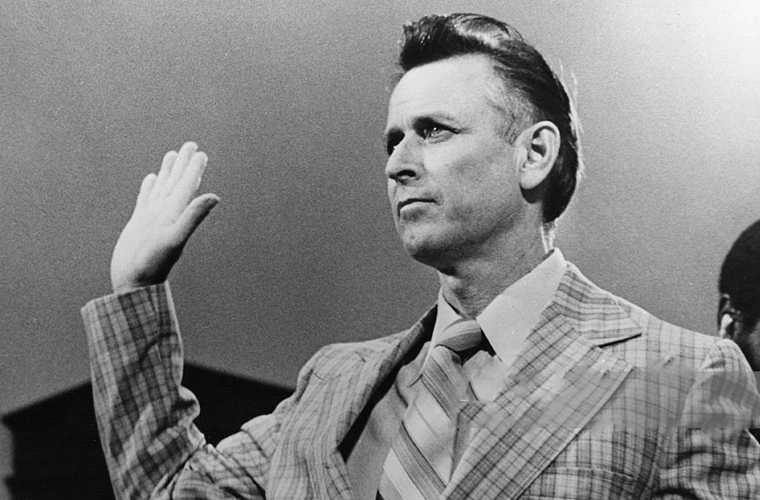 FBI investigators at the time traced the shot to a rooming house across the street, and witnesses directed them to a large bundle dropped on the sidewalk after the shooting. It contained a pair of binoculars, a newspaper with a story about King staying at the Lorraine Motel, and a .30-06 Remington Gamemaster that had fired one shot. All three bore the fingerprints of an escaped convict named James Earl Ray.

Ray, a white supporter of segregationist George Wallace, was a career criminal who’d been convicted at least four separate times for robbing a cafe, a taxi, a post office, and a grocery store. A year before, he’d escaped from Missouri State Penitentiary while serving a 20-year sentence, and was on the lam at the time King was shot. An international manhunt led to his capture in June 1968 at Heathrow Airport in London, where he was caught carrying two fake Canadian passports. Ray confessed to the crime on March 10, 1969, and received a 99-year prison sentence, which increased to a 100-year sentence after he briefly escaped in 1977.

But within a few days of confessing, Ray began to claim his innocence, arguing that he had been set up by a man he knew only as “Raoul.” It was Raoul, Ray said, who had directed him to buy the gun and the binoculars, and rent the room across the street from the motel. Ray said he wasn’t in the room when King was shot, but he was unable to consistently explain where he had been, or keep other important details in his story straight. Over several decades, federal investigators have routinely concluded that Raoul doesn’t exist.

This doesn’t mean that Ray couldn’t have received assistance. Some people had trouble, for example, believing Ray had arranged his international escape all by himself since he had a track record of getting caught for more minor crimes. When authorities caught him in London, he’d been planning to travel to Rhodesia, a former African state ruled by a white minority in present-day Zimbabwe.

But even if Ray had help, the evidence strongly pointed to him pulling the trigger. Ray’s fingerprints were the only ones found on the gun, and there were no witnesses who had seen him with Raoul during the 9 months they supposedly knew each other (Ray’s description of Raoul also changed a few times).

It’s not clear when Coretta Scott King, widow of Dr. King, began to believe in Ray’s innocence. But almost immediately after her husband’s assassination, she suspected that the FBI, which had investigated the murder, was involved in it.

“There is abundant evidence of a major high-level conspiracy in the assassination of my husband, Martin Luther King, Jr.,” Coretta King said at a press conference in 1999, according to The King Center. It was a theory she maintained until her death in 2006 that has so far never been proven. Yet given the way the bureau had treated her and her family, her suspicion of the FBI and its conclusions about her husband’s killer came from a very reasonable place, says John McMillian, a history professor at Georgia State University.

During the 1950 and ‘60s, the FBI surveilled and harassed Dr. King, his family, and his associates. The bureau wiretapped his phone and monitored his movements, taking advantage of times when he seemed particularly upset or depressed. In one instance, the FBI sent him a tape that allegedly contained audio of him having an affair. With it came a letter threatening Dr. King with public exposure if he didn’t kill himself, and claiming that the sender had evidence of other affairs.

“They might not have been involved in the murder,” McMillian observes of the FBI, “but I wish people knew the really shameful things that they did.”

Indeed, a former agent from the FBI’s field office in Atlanta said the bureau’s tracking of Dr. King was second “only to the way they went after Jimmy Hoffa.” In 1975, a group of former FBI agents called on Congress to investigate this harassment. That investigation declassified scores of memos detailing the bureau’s abusive behavior but did not reveal any evidence that the FBI had formally plotted his death.

Coretta King’s specific belief in Ray’s innocence is a little tougher to explain. The King family started to publicly voice the opinion in 1997. That year, Dr. King’s son Dexter Scott King visited Ray in prison to draw attention to the family’s push to appeal his case. Even after Ray died in 1998 from complications caused by hepatitis C, the family continued to assert there was, as Coretta King said in 1999, “overwhelming evidence that identified someone else, not James Earl Ray, as the shooter, and that Mr. Ray was set up to take the blame.”

The King family’s belief in Ray’s innocence was partly influenced by the strange case of Loyd Jowers, who’d owned the restaurant below Ray’s rented room in Memphis. For the first 25 years after Dr. King’s death, Jowers did not claim any involvement in the murder. But after HBO conducted a televised mock trial about the assassination in 1993—in which Ray gave his first public testimony and was found not guilty—Jowers declared that he’d been part of a conspiracy to kill Dr. King and that Ray had been set up to take to fall. The other people involved in this conspiracy, Jowers said, included Memphis police officers, a Mafia member, and the infamous Raoul.

These claims led Dr. King’s estate to sue Jowers in 1999 for a symbolic $100 in a wrongful death civil action. During the four-week trial in Memphis, a 12-person jury heard testimony from over 70 witnesses; but not Jowers, who didn’t testify because there were no criminal charges at stake. The jury awarded the money to the estate, deciding that Dr. King’s assassination had likely been the result of a conspiracy that involved Jowers, not Ray.

The day after the trial ended, Coretta King held a press conference in Atlanta to praise the decision.

“I wholeheartedly applaud the verdict of the jury and I feel that justice has been well served in their deliberations,” she said. “The jury was clearly convinced by the extensive evidence that was presented during the trial that, in addition to Mr. Jowers, the conspiracy of the Mafia, local, state, and federal government agencies, were deeply involved in the assassination of my husband.”

It’s important to note that this verdict was not a criminal conviction, as is sometimes erroneously implied when this case surfaces online. Between 1998 and 2000, the Department of Justice investigated Jowers claims and the evidence in the civil trial and concluded that Jowers’s claims weren’t credible. Among the evidence was a recording of Jowers in which he suggested he was interested in fabricating his story for financial gain.

So, are there are still remaining questions about how everything happened the day of Dr. King’s assassination? As with most cases, the answer is yes. But among legal and historical scholars, there is a broad consensus that James Earl Ray, though he may not have acted alone, is the gunman who shot Martin Luther King.