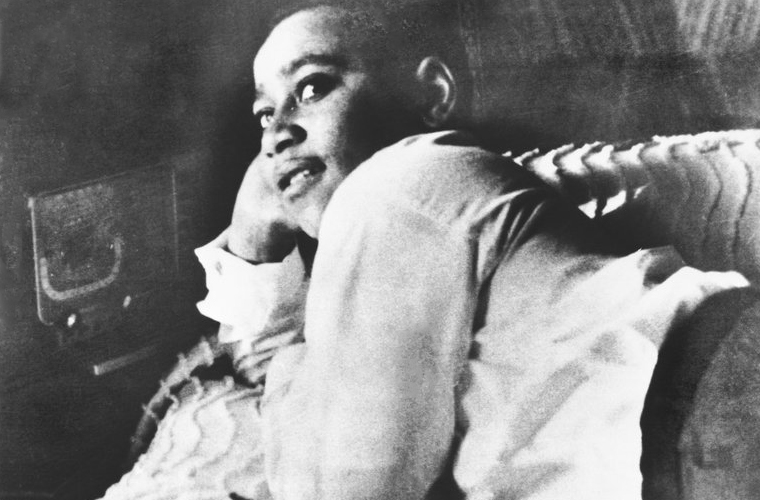 Emmett Till, a 14-year old African-American boy, was murdered in August 1955 in a racist attack that shocked the nation and provided a catalyst for the emerging civil rights movement. A Chicago native, Till was visiting relatives in Money, Mississippi, when he was accused of harassing a local white woman. Several days later, relatives of the woman abducted Till, brutally beating and killing him before disposing of his body in a nearby river. Till’s devastated mother insisted on a public, open-casket funeral for her son to shed light on the violence inflicted on blacks in the South. Till’s murderers were acquitted, but his death galvanized civil rights activists nationwide.

Emmett Louis Till was born on July 25, 1941, in Chicago, Illinois, the only child of Louis and Mamie Till. Till never knew his father, a private in the United States Army during World War II. Emmett Till’s mother was by all accounts an extraordinary woman. While raising Emmett Till as a single mother, she worked long hours for the Air Force as a clerk in charge of secret and confidential files.

With his mother often working more than 12-hour days, Till took on his full share of domestic responsibilities from a very young age. His mother recalls, “Emmett had all the house responsibility. I mean everything was really on his shoulders, and Emmett took it upon himself. He told me if I would work, and make the money, he would take care of everything else. He cleaned, and he cooked quite a bit. And he even took over the laundry.”

In August 1955, Till’s great uncle Moses Wright came up from Mississippi to visit the family in Chicago. At the end of his stay, Wright was planning to take Till’s cousin, Wheeler Parker, back to Mississippi with him to visit relatives down South, and when Till learned of these plans he begged his mother to let him go along.

Three days after arriving in Money, Mississippi, on August 24, 1955, Emmett Till and a group of teenagers entered Bryant’s Grocery and Meat Market to buy refreshments after a long day picking cotton in the hot afternoon sun. What exactly transpired inside the grocery store that afternoon will never be known. Till purchased bubble gum, and some of the kids with him would later report that he either whistled at, flirted with, or touched the hand of the store’s white female clerk—and wife of the owner—Carolyn Bryant.

Four days later, at approximately 2:30 in the morning on August 28, 1955, Roy Bryant, Carolyn’s husband, and his half-brother J.W. Milam kidnapped Till from Moses Wright’s home. They then beat the teenager brutally, dragged him to the bank of the Tallahatchie River, shot him in the head, tied him with barbed wire to a large metal fan and shoved his mutilated body into the water.

Did you know? In 2009, the original glass-topped casket that Emmett Till was buried in was acquired by the Smithsonian’s National Musem of African American History and Culture.

Till’s body was shipped to Chicago, where his mother opted to have an open-casket funeral with Till’s body on display for five days. Thousands of people came to the Roberts Temple Church of God to see the evidence of this brutal hate crime.

Till’s mother said that despite the enormous pain it caused her to see her son’s dead body on display, she opted for an open-casket funeral to “let the world see what has happened because there is no way I could describe this. And I needed somebody to help me tell what it was like.”

In the weeks that passed between Till’s burial and the murder and kidnapping trial of Roy Bryant and J.W. Milam, two black publications, Jet magazine, and the Chicago Defender, published graphic images of Till’s corpse. By the time the trial commenced on September 19, Emmett Till’s murder had become a source of outrage and indignation throughout much of the country.

Because blacks and women were barred from serving jury duty, Bryant and Milam were tried before an all-white, all-male jury. In an act of extraordinary bravery, Moses Wright took the stand and identified Bryant and Milam as Till’s kidnappers and killers. At the time, it was almost unheard of for blacks to openly accuse whites in court, and by doing so Wright put his own life in grave danger.

Despite the overwhelming evidence of the defendants’ guilt and widespread pleas for justice from outside Mississippi, on September 23 the panel of white male jurors acquitted Bryant and Milam of all charges. Their deliberations lasted a mere 67 minutes.

Only a few months later, in January 1956, Bryant and Milam admitted to committing the crime. Protected by double jeopardy laws, they told the whole story of how they kidnapped and killed Emmett Till to Look magazine for $4,000.

Coming only one year after the Supreme Court‘s landmark decision in Brown v. Board of Education mandated the end of racial segregation in public schools, Till’s death provided an important catalyst for the American civil rights movement.