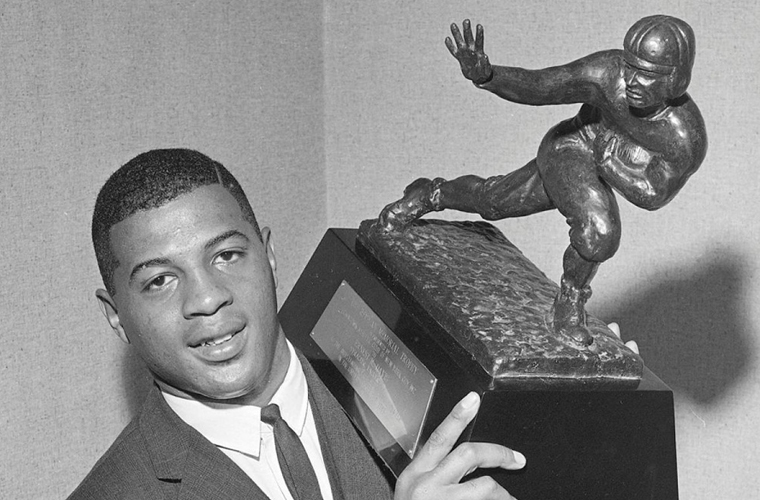 A three-time All-American halfback and 1961 Heisman Trophy winner, Ernie Davis led Syracuse University to the national championship as a sophomore and was inducted into the College Football Hall of Fame in 1979. He was the first African American man to win the Heisman Trophy and to be picked first overall in the NFL draft, but he never played a pro game and died at 23 after contracting leukemia.

Davis was born on December 14, 1939, in New Salem, Pennsylvania. Davis never knew his father, who died shortly after he was born, and was given to the care of his maternal grandparents when he was 14 months old. Money was tight in their Uniontown, Pennsylvania, household, and Davis suffered from a bad stuttering problem, but he nevertheless received adequate care, and later credited those difficult early years with installing in him the virtues of discipline and family.

Davis went to live with his mother and stepfather in Elmira, New York, when he was 12, and soon proved an athletic prodigy. He played baseball, basketball, and football at Elmira Free Academy, earning high school All-American honors in the latter two sports. Davis led the school’s basketball team to 52 consecutive victories, and some felt his natural gifts were best suited for the hardwood. However, Davis’ first love was football. He was heavily recruited by some of college football’s top programs but was swayed by NFL great Jim Brown, who convinced Davis that Syracuse University, Brown’s alma mater, would be a welcoming place for a young Black athlete.

Davis didn’t play during his freshman season at Syracuse, as was the rule at the time, though he dominated practices with his speed and power. He compiled 686 yards on 98 carries and 10 touchdowns as a sophomore, earning the nickname “The Elmira Express” and the first of three All-America selections. Although he pulled a hamstring shortly before the Cotton Bowl on New Year’s Day in 1960, Davis scored two touchdowns to help beat the University of Texas, 23-14, cementing an undefeated campaign and the national championship for the Orangemen.

Davis’ honors and accomplishments on the gridiron were matched only by the adversity he faced off the field; as a Black athlete playing many games in the South, he was the victim of racism on several occasions. One of the most publicized incidents occurred after Davis was selected the Cotton Bowl MVP in 1960 when he was informed that he could accept his award at the post-game banquet but would then immediately have to leave the segregated facility. Although popular lore holds that the entire team agreed to boycott the banquet, at least one teammate has insisted that the idea was overruled by Syracuse officials.

Tragic Death
Although the details are somewhat disputed, Davis’ contract was considered to be the most lucrative ever offered to an NFL rookie. His teammates and supporters looked forward to seeing the 6-foot-2, 210-pound Davis sharing the backfield with Brown, breaking countless records and leading the Cleveland Browns to a decade of victorious seasons.

Those seasons would never come, however, as Davis was diagnosed with acute monocytic leukemia during preparations for the 1962 College All-Star Game. Treatment began immediately, and Davis was optimistic that he would recover from his condition. When his cancer went into remission that fall, it seemed only a matter of time before he made his pro debut, but Cleveland coach Paul Brown feared for Davis’ health and kept him on the sidelines. The disease would prove incurable, and Davis died on May 18, 1963, never having played a professional football game. Both the House and the Senate eulogized him, and his wake was held in The Neighborhood House in Elmira, New York, where more than 10,000 mourners paid their respects.

Accolades from JFK
Davis’ character and his athletic accomplishments caught the eye of John F. Kennedy, who had followed his college career. They finally had the chance to shake hands and talk when Davis was in New York to accept the Heisman Trophy in December 1961, an encounter that thrilled the young football star.

In 1963, when he heard Davis would be honored by his high school with a school holiday, the president sent a telegram reading: “Seldom has an athlete been more deserving of such a tribute. Your high standards of performance on the field and off the field reflect the finest qualities of competition, sportsmanship, and citizenship. The nation has bestowed upon you its highest awards for your athletic achievements. It’s a privilege for me to address you tonight as an outstanding American, and as a worthy example of our youth. I salute you.”

Legacy
Although he never played a game with the Browns, Davis’ No. 45 was retired by the team shortly after his death. He was elected to the College Football Hall of Fame in 1979, and in 2005 the Syracuse football team retired No. 44, which had been worn by star halfbacks Davis, Brown, and Floyd Little. Today, Davis is remembered for his sportsmanship, the grace with which he handled the racial intolerance of his time, and his courage in facing a disease that ultimately claimed his life.

Movie
The 2008 Universal Pictures film The Express: The Ernie Davis Story, based on the nonfiction book Ernie Davis: The Elmira Express, by Robert C. Gallagher, helped keep Davis’ memory alive by exposing new generations of fans to his story.