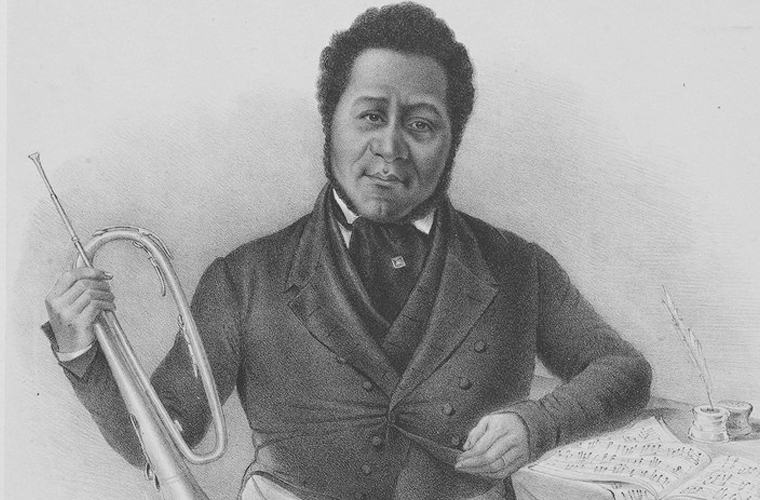 Francis Johnson, musician, composer, and bandmaster was born in 1792 in Martinique in the West Indies and emigrated to Philadelphia, Pennsylvania in 1809 at the age of 17.  By that point, he had already mastered the keyed bugle and the violin.  By his early 20s, he was building a reputation as a bandleader in Philadelphia and southeastern Pennsylvania.

Johnson gained greater popularity after music publisher George Willig published his Collection of New Cotillions in 1817. This was the first instance of a black band leader having his musical compositions published. By 1818, 26-year-old Johnson had become a leading dance band conductor for Philadelphia’s high society.  During the 1820s, Johnson’s band performed at the city’s most popular dance venues at schools, private parties, and balls.  Prominent military regiments like the Washington Guards Company Three Band and the State and the First Troop Philadelphia City Cavalry also hired Johnson’s ensemble.  He personalized his performances by experimenting with different instrumentations, strings, and winds.

Besides serving the musical taste of the white public, Johnson also performed spirituals at African American churches in Philadelphia, Boston (Massachusetts), and New York.  One of his most memorable musical performances occurred in 1841 when he collaborated with Morris Brown, Jr., one of the leading black ministers of the era, to perform Haydn’s Creation at the First African Presbyterian Church in Philadelphia. Johnson’s band also shared the spotlight with other black bands in Philadelphia including those led by James Hemmenway and Isaac Hazzard.  Nonetheless, he was the most popular black band of the era.

Besides having the distinction of being the first black American composer to have his arrangements published as sheet music, Johnson was also the first African American bandleader to conduct public concerts and in 1837 he led the first American ensemble to perform before Queen Victoria in England.  Johnson was also the first black musician to perform in integrated musical events in the United States, and the first musician to introduce keyed brass instruments to American bands.  Johnson left numerous manuscript and piano transcriptions.

Francis Johnson died in 1844 in Philadelphia after a lengthy illness at the age of 52.